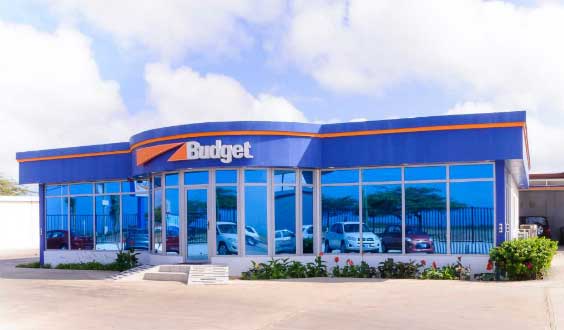 Budget Rental Cars in Aruba, and its Director, Larry Nyack, couldn’t have started smaller – or come further over the last 50 plus years of serving visitors, local residents, and government agencies on the small Caribbean island. “The business started in 1962,” he says. “It’s a family business. But the family had limited funds, and we started with one car. It was rented for seven dollars a day. It was a Fiat that was so ancient that the doors opened front to backward. But that was a long time ago.” Larry also points out that the business was started with his mom, Decima Richardson, and her husband at the time, Joffre Richardson. His mom will be 90 years of age and still goes to work on a daily basis. Total dedication.

Happily, for a company that only had one old car when it began, tourism began to grow rapidly over the subsequent years, and as a result, this family business was able to take advantage of Aruba’s burgeoning popularity. “In 1967, we had 54 cars,” he exclaims, proudly.

In the early years, the business remained independent, but the family soon saw the advantages of partnering with a major agency. “We wanted to increase market share, and that was somewhat limited going as an independent. A brand name means a lot,” he explains. An early alliance with Hertz didn’t work out, so the family reached out to Budget in 1977 requesting a franchise. The resulting venture has clearly been good for both parties. Today, Budget Aruba has a fleet of 343 vehicles and about 33 employees serving its customers’ car rental needs.
Budget Rental Aruba’s customers are approximately 80 percent tourists; local corporate customers make up about 10 percent of its business; the rest are business travelers and locals. Car rental in the Caribbean is very dependent on the seasons. “The winter months are the high season,” says Nyack. “It starts in mid-December and goes through the end of April. Low season is between May and June. July and August is somewhere in the middle, and another low season is September to December.”

Another aspect of the car rental business model is regular turnover. According to Nyack, all automobile rental companies have to retire their cars after five years on the road. Budget Aruba replaces 25 percent of its fleet on an annual basis. “Some of our competitors are car dealers, and as a result, it’s a lot easier for them to get rid of their used vehicles,” Nyack notes. “We have to depend on the market.” In order to entice customers into purchasing their used automobiles, Budget Aruba puts all of its retiring models through a thorough maintenance program. “We’ll change everything that would not last a year,” he says, “and over the years, we’ve developed a strong clientele base. We’re selling 81 cars this year, and we’re buying 111.” In order to stay financially solvent and manage the constant turnover, bank financing is imperative. “We will come up with 30 percent of the cost of the cars, the bank will come up with 70 percent, and we’ve got a 36 month loan,” he says.

Renting cars is also a very competitive business. And, according to Nyack, “The customer, today, is very demanding and very cost-conscious. So, we move rates according to what the competition does so we can compete. A brand name is nice to have, but you wouldn’t get the business without attractive rates. The team here strives for a 90 plus-percent utilization of the fleet. That keeps us quite busy, but we’re able to stay competitive, that way.”

Eighty-five percent of Budget Aruba’s business comes through the Princess Beatrix Airport, but Nyack says that there are many people who want to rent for one or two days from the hotel area. Naturally, that is a clientele that that he wants to attract. But, so far, exposure in that area is limited. “We have not concentrated on the hotel area,” he admits. “There is a market there. We have at least 10 or 12 major hotels, here. They’re all on the beach side. We do have a local office down there, but what we haven’t done is concentrated on trying to get into the hotels and that market. We’re going to have to try to do that.” Regardless of the intent, however, Nyack explains that it’s not always that easy to grow. “The government decides how many cars you have in your fleet, so we have to request permits and sometimes it takes awhile. You’re not just free to go ahead and expand as you feel like.”

While growth may be slower than Budget Aruba might like, there is nothing lacking in the company’s ability to prosper and succeed. Frederick Mark, a Manager at Budget, elucidates: “I would say we operate around the main point of ‘service.’ We give fair rates, and in the process of giving that level of service, it has paid off for us, because we have repeat customers. On an island like Aruba, you want to continue to maintain your customer base. And for that reason we stress service and rates. And whatever other way we can get involved in helping an individual, we also do it. Our people are very knowledgeable about the island; they can lead you to hotels and restaurants, etc., that people come asking for. And they like the fact that you’re taking a few minutes to assist them. So, we give an entire package.”

Nyack stresses the appreciation that he has for a dedicated and hard working group of employees. Teamwork is a norm at Budget; everyone joins in on difficult days and solves problems together. Although the group is too large to cite here, Nyack wants to mention a key employee, Ms. Lisette Yarzagaray. Lisette began working for Budget in September, 1991. This was her first job and she is presently working in the capacity of Office Manager. Dedicated, hard working, and knowledgeable, this model employee handles all aspects of the operation.

Good vehicles, competitive rates, and personal service are the hallmarks that should keep Budget Rental Aruba thriving for another 50 plus years.

Aruba Bank N.V.- A commercial bank providing corporate, private and retail banking services in Aruba. With total assets of over AWG 1.5 billion, Aruba Bank is the largest commercial bank on the island. The bank has five branches and more than 250 employees who display the qualities that mark a high-level banking professional: knowledge, skills, experience, intelligence and constant alertness. – www.arubabank.com