CARICOM, UNITED NATIONS RECOMMIT TO ACHIEVING SDGS IN THE REGION 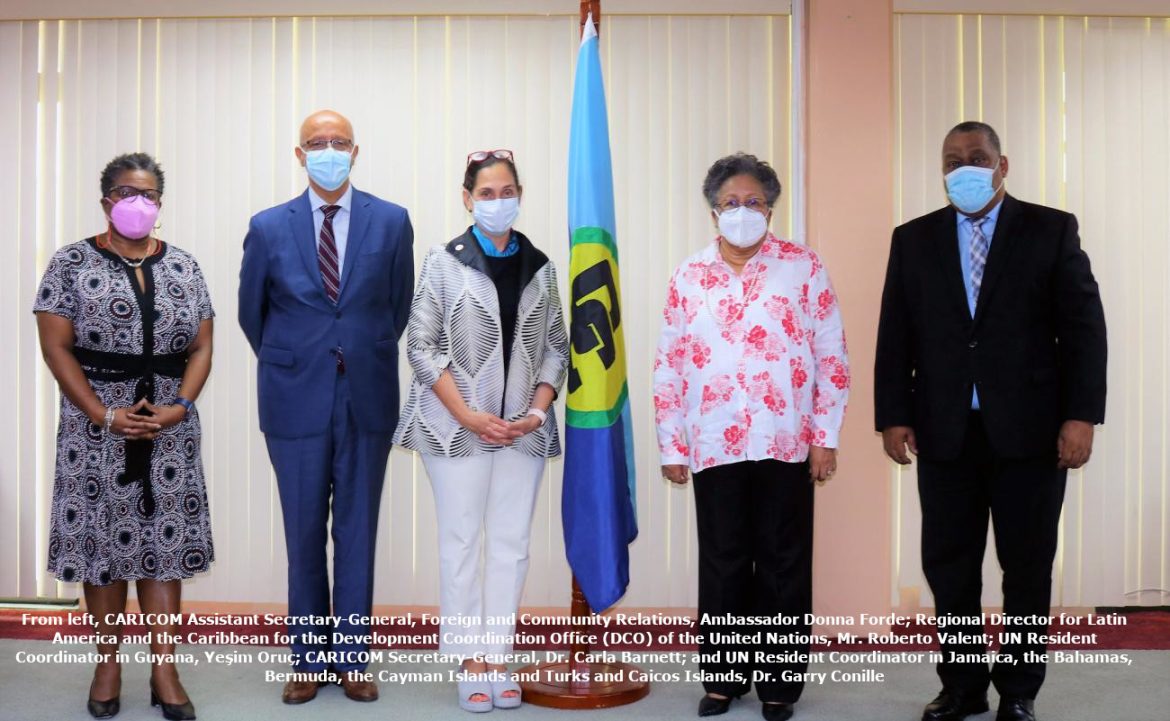 On Tuesday, 12 July 2022, Her Excellency Dr. Carla Barnett, Secretary-General of the Caribbean Community (CARICOM) received Mr. Roberto Valent, Regional Director for Latin America and the Caribbean for the Development Coordination Office (DCO) of the United Nations.

The CARICOM Secretary-General and UN Regional Director talked about their respective organisations’ work on a range of development priorities, spanning economic diversification, food security, human services, climate resilience, violence against women and girls, crime and the rule of law.

During the meeting, Dr. Barnett said, “There is urgent need to close the emissions gap to maintain global warming to well below 1.5⁰C, and to enhance global advocacy for greater access to climate financing to help Small Island and Low-lying Coastal Developing States (SIDS) address the effects of climate change and respond effectively to loss and damage caused by climatic events.” She noted the crucial role of the United Nations to enable strong advocacy on these issues.

Dr. Barnett recalled the fruitful discussions CARICOM Heads of Government held with the UN Secretary-General during the just-concluded 43rd Regular Meeting of the Conference of Heads of Government in Suriname, and looked forward to further strengthening the relationship between the CARICOM Secretariat and the United Nations Agencies that would redound to the benefit of the peoples of the CARICOM Region.

The social, economic and security situation in Haiti was also discussed. Secretary-General Barnett underscored CARICOM’s unwavering support for Haiti and said that the Community continues to urge the international community to support Haiti’s long-term development needs. She further reiterated the support of CARICOM Heads of Government for the renewal of the UN Office in Haiti (BINUH) with a strengthened mandate taking into account the prevailing security situation, as recommended by the UN Secretary General.

Mr. Valent stated, “The UN is committed to supporting the work of regional organisations worldwide, including CARICOM, its Secretariat and its institutions, and of course its Member States. The UN Secretary-General was at the CARICOM Heads of Government meeting in Suriname last week, and I am delighted to have been able to meet the CARICOM Secretary-General today to further those discussions.”

“Both the CARICOM SG and I know that there is a monumental effort required across the Caribbean to deliver on the promise of the Sustainable Development Goals. The Agencies, Funds and Programmes of the UN System are here for exactly this reason. Today, we spoke a little bit less about ‘what’ needs to be done, and a little bit more about how we are practically going to strengthen our developmental relationship to accelerate our shared objectives.”

The UN’s development cooperation with CARICOM Member States, the Secretariat, and CARICOM institutions is delivered substantially via the Multi-Country Sustainable Development Cooperation Framework (MSDCF) 2022-2026, established to support the countries of the Dutch- and English-speaking Caribbean.

The MSDCF provides signatory states with direct access to UN technical expertise and to the resources and partnerships necessary to advance Caribbean development efforts. The Framework is aligned with the Sustainable Development Goals (SDGs), the SAMOA Pathway, and the International Human Rights framework; and its strategy is built around the CARICOM Member States’ own agreed priority areas.