ECLAC: Latin America and the Caribbean Should Develop Regional Platforms for Producing and Distributing Vaccines and Medicines 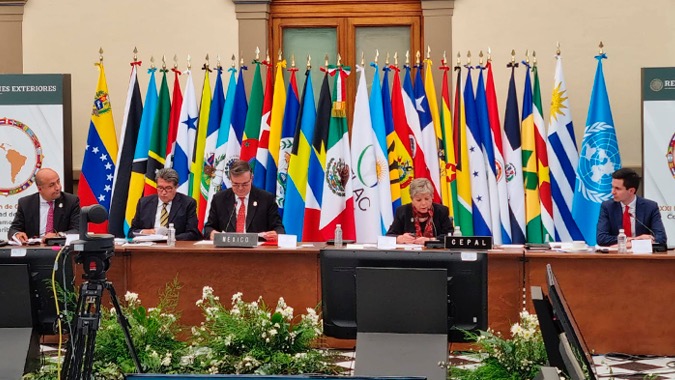 Alicia Bárcena, Executive Secretary of the UN regional commission, presented progress on the Comprehensive Plan for Health Self-Sufficiency, during the XXI Meeting of the Foreign Ministers of CELAC.

Latin America and the Caribbean can and should become an actor in the development and production of new vaccines, in the framework of a concerted regional health strategy, Alicia Bárcena, Executive Secretary of the Economic Commission for Latin America and the Caribbean (ECLAC), stated before 32 Ministers of Foreign Affairs and other high-level authorities from the region, gathered at the XXI Meeting of Foreign Ministers of the Community of Latin American and Caribbean States (CELAC), which was held in Mexico.

The senior United Nations official presented progress on the Comprehensive Plan for Health Self-Sufficiency, a programmatic blueprint that ECLAC is developing at the request of CELAC for strengthening the production and distribution of medicines, particularly vaccines, in the region’s countries and for reducing external dependence.

The meeting was inaugurated by Mexico’s Foreign Minister, Marcelo Ebrard, in that country’s capacity as President Pro Tempore of CELAC, who pointed up the stronger cooperation forged between the Community’s member countries during the pandemic.

“If before the pandemic it was proposed that this Community be the main instrument for Latin America and the Caribbean’s integration, we are undoubtedly on the way to achieving that,” Minister Ebrard declared.

During her presentation, ECLAC’s Executive Secretary addressed the situation of health care systems and the pharmaceutical industry in the region amid the pandemic, along with the priority actions to be implemented to strengthen them and the components of the Comprehensive Plan for Health Self-Sufficiency. She recalled that Latin America and the Caribbean is the region most affected by the pandemic, with just 8.4% of the world’s population but 32.5% of COVID-19-related deaths worldwide.

Alicia Bárcena added that the region faces a paradox today because, although it will grow by 5.2% in 2021, the debt problem persists along with less fiscal space; poverty affects 209 million people and extreme poverty, 82 million; and informality and unemployment have yet to recover. “We are caught in the trap of middle-income countries,” she underlined.

The senior official warned about unequal access to vaccines, specifying the asymmetries within the region and those vis-à-vis the rest of the world. She noted that in Latin America and the Caribbean, just 16.8% of the population has completed the full vaccination scheme, while in the United States and Canada, that figure rises to 49.3% of the population, with a surplus of vaccines. Meanwhile, Europe has 44.6% of its population vaccinated. “We are concerned that some countries’ acquisitions exceed their vaccination needs. The European Union, United States, United Kingdom, Canada and Japan account for 43.9% of purchase commitments, with just 12.9% of the global population,” she emphasized.

ECLAC’s highest authority underscored that the health-care manufacturing industry in the region is marked by a low level of technological development and high dependence on the production of multinational companies and imports. In 2019, imports doubled the amount of exports, with the deficit exceeding $20 billion dollars. “Why did this pandemic catch us at such a bad time? Because we import everything, that is part of the problem. Our national and regional industry produces generic drugs, but not innovative medicines. We have very low investment in research and development, which we must boost,” Alicia Bárcena stated.

In her remarks to the high-level authorities from the region, ECLAC’s Executive Secretary detailed the eight priority areas of the Comprehensive Plan for Health Self-Sufficiency along with its five lines of action.

The five lines of action on which progress has been made, and on which further progress is proposed at a regional or subregional level, consist of a regional mechanism for vaccine purchases, the creation of consortiums to accelerate vaccine development, platforms for clinical trials, access to intellectual property, and an inventory of regional capacities.

Furthermore, she stressed the relevance of articulating sectors and actors through subregional integration bodies such as the Central American Integration System (SICA), the Caribbean Community (CARICOM), the Southern Common Market (MERCOSUR) and the Pacific Alliance.