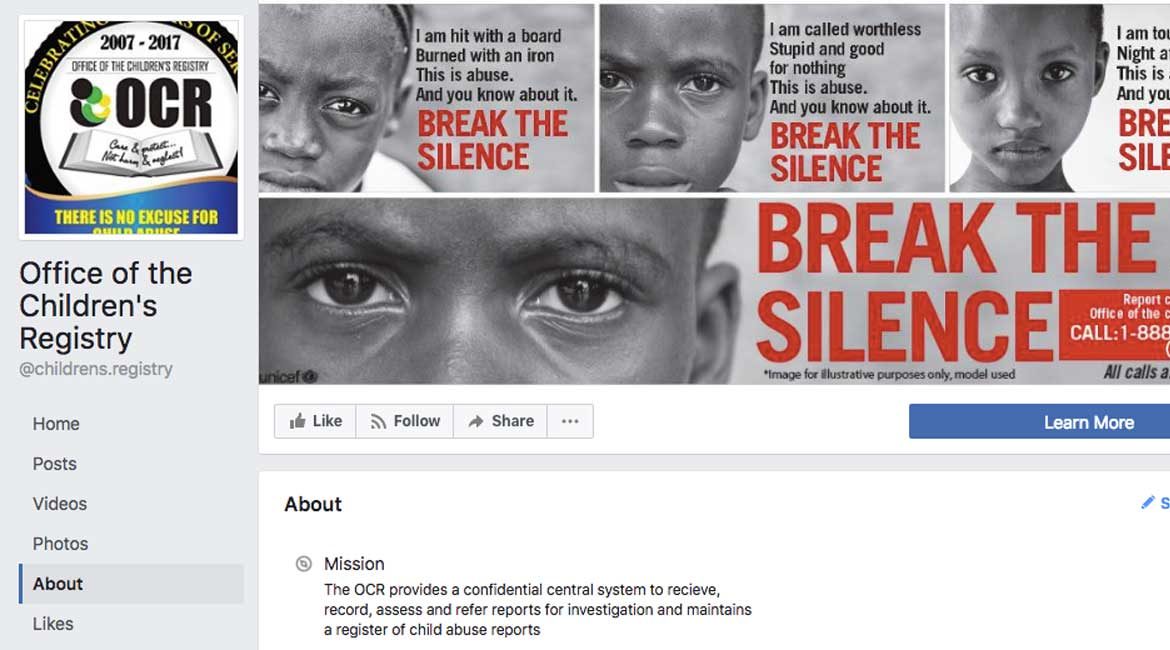 The month of May is Child Month in Jamaica — an official designation that has been embraced over the years by non-governmental organizations (NGOs) and the public in general. In light of ongoing concerns over the welfare of children in Jamaican society, the National Child Month Committee (which dates back to 1953) chose this year’s theme as “Take Action! Break the Chain of Abuse Against Children.”

On May 1, the Jamaican government and Facebook embarked on a partnership to broaden the reach of missing children alerts on the island — the first time that Jamaica has harnessed social media for this purpose. Although Jamaicans and others have often used social media informally to post pictures of missing adults and children, there are inherent dangers, including possible legal problems, associated with this. Jamaica is working on creating a more efficient system that will include the more than 1.2 million Jamaicans currently using Facebook.

The issue of missing children is far more complex than one might think. In Jamaica, as in other countries, the factors that lead to a child’s disappearance may include human trafficking, border security, and parental custody issues.

However, according to the Global Missing Children’s Network (GMCN) — which has 25 member countries, including Jamaica — there are few reliable statistics on missing children around the world. In many countries, such statistics are not available at all, and neither are missing child alert protocols. The GMCN suggests the issue is further complicated by the lack of a clear, universal definition of “missing children”.

At least in Jamaica, there has been a documented decline in the number of missing children largely due to the initiation of the Ananda Alert (similar to the Amber Alert system in the United States). Still, around ten percent of them are not found each year.

According to the Missing Person Monitoring Unit of the Jamaica Constabulary Force, 1,725 children went missing in 2016, 269 of whom were not found. The Jamaican alert system is named after 11-year-old Ananda Dean, who was abducted on her way home from school in 2008 and her body found days later. The alert program was established the following year.

Under the new arrangement, Facebook’s director of trust and safety Emily Vacher, who attended the program’s May 1 launch in Kingston, noted that Jamaica and the Office of the Children’s Registry (OCR) are leaders in this area.

“When Facebook receives an alert from OCR, within 15 minutes that alert will be prepared and disseminated to the public,” she stated. “When you see this missing child alert it pops up as an Active Ananda Alert that will have the picture of the missing child and a brief description. When you click ‘Learn More’ it will take you off Facebook to the page prepared by the Global Missing Children Network (GMCN), where you will see the age, height, weight, last clothing seen in, and a description of the vehicle or license plate number if all that was witnessed.”

She further explained that there will be a share button for users to post to their Facebook timelines and monitor developments there. Vacher pointed out that the omission of the “Like” or “Comment” buttons was deliberate, in order to prevent people from giving tips on recovering the child in a place that might not be monitored. Vacher said, too, that the alerts that currently exist in traditional media will not be replaced; rather, they will be enhanced using Facebook.

The JQ Charles Group of Companies –...