Trinidad and Tobago to Expand Bilateral Cooperation with ECLAC 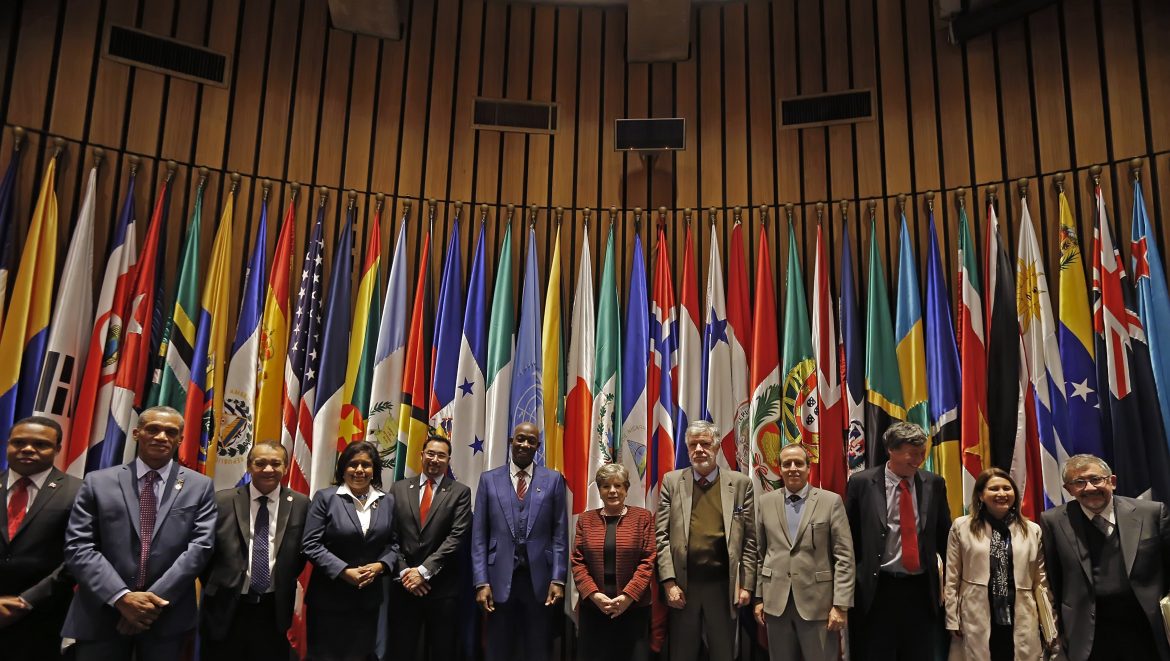 The prime minister of Trinidad and Tobago, Dr Keith Rowley, recently visited the central headquarters of the Economic Commission for Latin America and the Caribbean (ECLAC) in Santiago, Chile, where he was received by its Executive Secretary, Alicia Bárcena. During the meeting, both officials agreed to increase bilateral cooperation and technical assistance, especially with regard to the economy and energy.

Rowley, who was in Chile on an official visit, was accompanied by a delegation made up of the ministers of foreign affairs, industry and trade, energy and energy industries, and the Office of the Prime Minister of Trinidad and Tobago. During the meeting, the authorities shared experiences and points of view with ECLAC’s executive secretary and the organization’s deputy executive secretaries, as well as with the directors of this United Nations regional commission’s divisions of economic development; international trade; production, productivity and management; natural resources and infrastructure; and statistics.

“We are totally committed to the Caribbean and we advocate so that their nations are not unjustly qualified as middle-income countries, a situation that complicates their access to financing,” Bárcena stated. The senior United Nations official indicated that special attention should be paid to the triple vulnerability that Caribbean territories suffer, which is manifested in the fact that they are deeply affected by climate change, they have difficulties financing their economies, and they are burdened with a high public debt, which totals 70 percent of the sub-regional gross domestic product (GDP) on average.

For that reason, she highlighted ECLAC’s proposal to reduce the debt of English-speaking Caribbean island states, which consists of forgiving part of their debt to create a resilience fund that allows for financing climate change mitigation and adaptation efforts. “We are ready to help you. We want to know what your needs are to provide assistance for overcoming the problems that affect the Caribbean today,” Bárcena stressed.

Along with thanking ECLAC for the work it has done and will continue doing to foster the well-being of Caribbean inhabitants, Rowley said that it is important to ensure that political decisions are based on reliable data and information. That explains the relevance of having independent statistics institutes, such as the National Statistical Office of Trinidad and Tobago.

He recognized that the debt problem is a challenge for countries of the sub-region and for that reason he urged that ECLAC’s proposal be promoted at the highest level, especially among the heads of state of the Caribbean Community (CARICOM). “ECLAC’s work is fundamental in order for governments in our region to choose the most suitable public policies for their population,” Rowley emphasized.

In terms of energy, the Prime Minister recognized that his country is living through a “perfect storm,” since on top of declining production of oil – one of the economy’s main products – there has also been a drop in the price of commodities, creating a situation that has affected economic growth. “For that reason, the advice and counsel that ECLAC can give us to diversify our economy will be vital for deciding what course of action we must take,” he stressed.