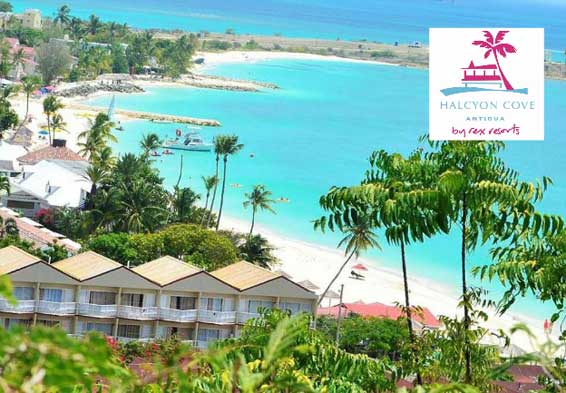 Everything an antigua vacation should be

The all-inclusive Halcyon Cove resort, located on the shores of Dickenson Bay, in St. John’s Parish, Antigua, has been a choice tourist destination for over 50 years. The concept of developing a hotel along one of the most beautiful beaches in the Caribbean was conceived following the construction of 12 cottages, known as the Trade Wind Cottages, on a hill overlooking the Bay.

In 1960, the Caribbean Beach Club bought the Trade Winds Cottages and expanded the property with 32 Beach Front rooms, which comprise the resort’s present-day Beach Front Rooms and Suites. This marked Phase One of the construction of what is now known as Rex Halcyon Cove. In 1972, Courtlines, another hotel operating company, purchased the hotel and added the 74 rooms, which today are known as A, B, C, and D blocks. Additional Phase Two developments included the Clouds Restaurant, the Old Lobby and the housekeeping area.

In 1973, the hotel was bought by the Government of Antigua and operated by different management companies over a period of time. By 1981, the Government had completed Phase Three of the hotel’s construction. The new extension, or “Government Wing,” as it became known, included the Time Share rooms. Other areas of the property were also completed, including the main kitchen, the Casino (now the Ciboney Lounge); the Deli (known as Frosties); the Arawak Terrace Restaurant; the Chips Night Club; and the Shopping Arcade.

In 1989, the hotel again became a private concern when it was bought by Cove Hotels (Antigua) Limited, and managed by Marketing Reservations International, Ltd. (MRI). The resort’s latest phase of development saw the construction of an additional 77 rooms on the southern side of the property, bringing the total number of rooms to 202 – 104 Garden rooms, 48 Poolside rooms, 10 Beach front rooms, and 16 Family rooms. In 1993, MRI established the Rex Resorts chain of hotels, now operating on four Caribbean Islands.

All through the years, the resort maintained its standards and competiveness as one of the best hotels on Antigua. Currently, Halcyon Cove employs 145 permanent staff members plus some casual and temporary workers. During the November to April busy season, many of its guests come from the United Kingdom and Canada. From May to October, a lot of its business is local.

Halcyon Cove markets itself as a family-friendly resort with its Family Rooms and a fully equipped Kids Club. Its location on the shores of Dickenson Bay, offers its guests many water-related activities, including swimming, scuba diving, beach volley ball, and beach cricket. Antigua offers families many historical places to visit, such as the Museum of Antigua and Barbuda, Dockyard and Indian Town National Parks, the old post office and court house, St. John’s Cathedral, and 18th century forts and sugar mills.

Guests can enjoy a spectacular view of Dickenson Bay from the Clouds Restaurant on the resort property, or take in a romantic á la carte meal at the Warri Pier Restaurant, located on its own pier overlooking the ocean. They can play tennis on one of its four courts, play golf on a course adjacent to the hotel, ride horseback across white sand beaches, rent a Hobie Cat or kayak, snorkel or water-ski, or simply relax under the warm Caribbean sun. Halcyon Cove’s all-inclusive packages include: full buffet breakfast, lunch, afternoon tea, and dinner; a choice of Caribbean cocktails; local beers, soft drinks, house spirits, and house wines; daily activities; regular evening entertainment at the Lobby Bar and the beachfront Carib Bar; and all taxes and tips.

A stay at the Halcyon Cove by Rex Resorts means plenty of sun, sea, and sand during the day, and fine dining and authentic Caribbean entertainment in the evening. Located on its own pier overlooking the ocean, it offers everything an Antigua vacation should be.

The Placencia Hotel, Residences, and Marina –...