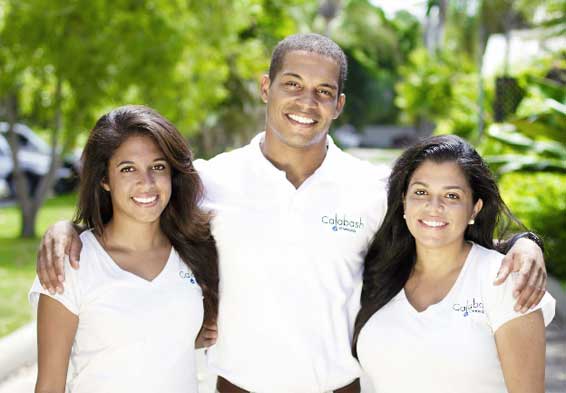 Pampering their guests is just a way of life

Grenada is an island country in the Windward chain of the Lesser Antilles, a group of islands in the Caribbean Sea, northwest of Trinidad and Tobago. Also known as the “Island of Spice,” because of the production of nutmeg, ginger, cloves, and mace, among other spices, Grenada has been independent since 1974, although it was once both French and a British colony. Grenada has many idyllic beaches around its coastline, including the 1.9 mile-long Grand Anse Beach in St. George, which is considered to be one of the finest beaches in the world. Besides excellent beaches, the island nation also is home to many beautiful waterfalls which lure tourists and vacationers from around the world.

Grenada is also home to the Calabash Luxury Boutique Hotel and Spa, owned and operated by Leo Garbutt, who, with his wife, bought the property on which the hotel sits, in 1987. Adele Garbutt, Leo’s daughter, is the resort’s current Sales and Marketing Director. She explains that the original hotel had only 22 rooms, and was a far different entity than it is today: “We now have 30 suites and five villas,” she explains. “We essentially rebuilt the property several times over and upgraded into the world-class resort that it now is.”

In fact, the modern Calabash is comprised of 30 suites arranged in a horseshoe shape around eight acres of lush tropical gardens facing out towards the sea. Each suite is beautifully decorated, boasting its own balcony or patio with exquisite views of the opulent surroundings. The resort’s five luxury villas sit on the hilltop overlooking the hotel. The villas have two, three, or five bedrooms. The five-bedroom Hummingbird Villa has been named “One of World’s Best Hotel Villas” by Condé Nast Traveler.

Garbutt says that the Calabash is known for the attention it pays to detail and personal service. “There are certain things that we do that aren’t necessarily easier for us, but is nicer for the guests,” she says. “For example, we don’t serve breakfast in a restaurant; we don’t have buffets where you go and line up to get your food, like a lot of hotels do. We serve it in-suite, or we sit on the beach and it’s all cooked to order.”

The Calabash is a multi-award winning hotel. In 2015, it was ranked in the following categories by TripAdvisor Traveler’s Choice Awards: No. 7 of the Top 25 Luxury Hotels in the Caribbean; No. 8 of the Top 25 Hotels in the Caribbean; and No.16 of the Top 25 Hotels for Romance in the Caribbean. Its 2015 TripAdvisor Certificate of Excellence landed it in the website’s Hall of Fame for achieving excellent user reviews, five years running. Other rankings and awards include: being listed in the 2015 US News top 10 Caribbean hotels; the 2015 Luxury Spa Hotel of the year from Luxury Travel Guide Awards; and a Four Diamond rating from the AAA. Its Gary Rhodes Restaurant was named one of the top 50 restaurants in the Caribbean in 2013 and 2014 – the only restaurant in the Grenada to make the 2014 list.

According to Garbutt, the vast majority of Calabash’s guests – almost 85 percent – come from the United Kingdom and tends to be aged 50 and above, with many repeat customers. But lately, the resort has been intent on expanding its clientele. “We’re now attracting more families and positioning ourselves so that we focus on the younger market as well,” she says. The hotel has special rates for families and has added lots of activities for children, especially during the summer months and school holidays. A new wellness center has just been completed, along with a new spa and juice bar. In addition, Garbutt reports that all the rooms are receiving upgraded interiors in order to make them look “chic and iconic,” and its new Wi-Fi system now reaches every corner of the property.

In order to reach these new markets, Garbutt says that social media has become a key part of the resort’s marketing strategy. “We’re getting picked up by lots of Instagram accounts, such as Beautiful Hotels, and Beautiful Destinations,” she notes.

Calabash’s five-year plan includes increasing the number of suites from 30 to 40, and, according to Garbutt, making some of them more “villaesque.” In order to accommodate a higher occupancy, the resort also intends to increase the size of its restaurants. Garbutt explains that a successful occupancy rate is generally between 70 and 100 percent, and that the Calabash always stays within that range. “Sometimes, when you have a smaller hotel, it’s quite easy to get gaps,” she maintains, “and those gaps mean that getting to a hundred percent occupancy is actually quite difficult. We’ve been very close to a hundred in the fall, but usually we stay between 75 to 95.”

Garbutt believes that what differentiates the Calabash from other resorts is the personal service provided by the hotel’s 90-member staff. Indeed, when it comes to a high level of devotion to guest satisfaction, it’s hard to beat breakfast being prepared by one’s own personal maid. “We prefer to do things in a more luxurious way,” she admits. But, at the Calabash Luxury Boutique Hotel & Spa on the Island of Spice, pampering their guests is just a way of life.

Scotiabank – As Canada’s most international bank, Scotiabank has been operating in Grenada since 1963. Today the bank operates three branches across the country and offers a complete range of retail and commercial banking services, including online banking and electronic cash management. Scotiabank is a strong supporter of various community initiatives and its charitable contributions range from sports programs and education to arts and culture. www.scotiabank.com