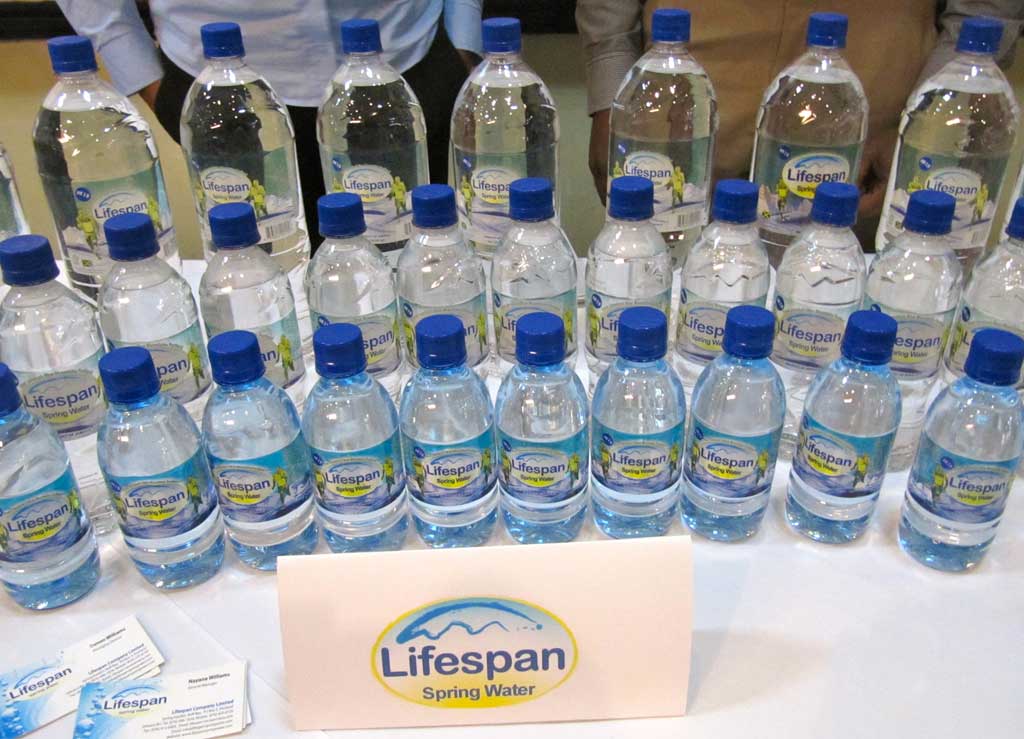 The Blue Mountains are the longest mountain range in Jamaica, dominating the eastern third of the island. Blue Mountain Peak, at 7402 feet, is Jamaica’s highest point. Whereas the island’s average rainfall is 77 inches per year, the higher elevations of the Blue Mountains can catch moisture-laden winds which can then drop over 200 inches of rain, per year, upon them. At the bottom of the Blue Mountains, is the Spring Garden Aquifer. It takes between 14 and 15 years for the rain that falls atop the Blue Mountains to funnel through the mineral rock within them and into the aquifer, below, a waterway that stretches beneath the land and reaches beyond the Northern Coastal parish of Portland, Jamaica to the sea. Spring Garden is also the home of the Lifespan Company Limited. Lifespan bottles the water that gushes from one of the seven springs it owns that are connected to the Spring Garden Aquifer. The flow rate of that particular spring is over 900 gallons per minute, or 473 million gallons of water, per year. But more important than the amount of water that flows from the aquifer’s many springs, is its quality. Because water that has passed through, and been filtered by, mineral rock for a decade and a half is not only extremely pure, oxygenated, and bacteria-free, it is also highly alkalized. And high alkalinity is prized as a very important element in the areas of health, vitality, and taste, as they relate to the bottled water industry.

Lifespan was founded in 2005 by Devon and Nayana Williams. Ms. Williams is the company’s Managing Director. She recounts Lifespan’s genesis and how she and her husband came to operate, what is today, an enormously successful business enterprise, but one that started out small and humble, although with high aspirations: “We wanted to do something that was beneficial for consumers that was not just about making a profit for ourselves,” she says. “And we wanted to create employment. We identified what we wanted to do, which was the bottled water business.” Providentially, Devon Williams’ family had been using the water from the spring for many years, but, even so, starting a business in Jamaica isn’t easy.

“In Jamaica it’s quite difficult to get financing to start a business,” says Williams. “It was a struggle in the beginning to raise the financing. We used our savings; we sold what we could to raise whatever we could. We sourced two containers and we built a 1200 square feet building space. We were able to get start-up equipment from the U.S., which was the most basic, semi-automated equipment we could find. It took a year to get here. We registered in 2005 and were able to start trading in 2006.”

Williams continues the Lifespan story, recounting, among other things, how she and Devon had to truck water to their first “factory” to bottle it: “We did extensive research on our own. The whole production element took us a while – to get the labor together, the source of bottles, and all that. But we were able to put the product together and we made our first batch. The next day we loaded it onto our pickup truck and went to East Portland, selling to all the little shops along the way. We sold ten cases that very first day, and from then on we were in business. As demand grew, the company outgrew its original facility. In 2010, it acquired 40 acres of land by the water source and, in 2011, it completed construction on a new, 9000 square foot facility, there. Operating costs were reduced significantly because the new plant was so close to the spring, and sales increased rapidly, as well, from over $30 million in 2010, to over $100 million by 2014. Just this year, Lifespan expanded is warehouse space to over 15,000 square feet and upgraded to a fully automated system which now involves blowing its own bottles – a feature which could cut production costs an additional 40 percent. The company’s 35 employees currently bottle 1600 cases per day of the 500 milliliter size (with 24 bottles to a case), and 800 cases of the 5-liter size, as well.

Lifespan doesn’t have to pay for its water, but it does need an extraction license from Jamaica’s Water Resource Authority, allowing it to bottle in whatever amount is stipulated on the license. And that amount is based on its determination of the spring’s rate of flow. Currently, the company is extracting only a fraction of what its license allows, which means that Lifespan has a huge potential for further growth.

And it’s that potential that Lifespan wishes to exploit by touting its water’s healthful qualities, as well as its higher alkalinity character in relation to the world’s other bottled waters. According to the Scientific Research Council (SRC) of Jamaica, Lifespan water has a higher pH value (a measure of acidity or alkalinity in which the pH of pure water is 7, with lower numbers indicating acidity and higher numbers indicating alkalinity) than all other brands in the western hemisphere. In fact, the company favorably contrasts it water’s pH of 7.9, against world-leading, Fiji water’s pH of 7.5, and France’s Evian water’s pH of 7.2.

Regarding Lifespan’s health benefits, Williams is clear: “Our product is a lifestyle product. It’s healthy and it’s naturally alkalized, so it neutralizes the acidity in the body. A lot of consumers are becoming increasingly aware of going the healthy route. They want to make sure that they are taking care of their bodies now, so that they don’t have those medical issues later on in life. We’re trying to educate the public and the market that we’re in.” In addition, according to many, alkaline water not only invigorates the body because it is negatively charged, and thus acts as an antioxidant, reducing cellular and DNA damage, it simply tastes better, as well.

Should Lifespan become able to exploit all of the springs on its property, which produce a total 5,500 gallons of water per minute, or 2.9 billion gallons per year, it could increase its production to 915 million 16.9 ounce cases, annually. The maximum, potential revenue from all its springs could then approach $US6.7 billion per year, which would make the company, far and away, the largest high-quality, natural alkaline spring water bottler in the western hemisphere, and ten times bigger than world-leading Fiji.

So, the small company that began a mere decade ago, with only a husband, wife, one employee, and an old pickup truck, today stands on the precipice of becoming a major player in a world-wide, 60+ billion-dollar-a-year industry, and a global leader in the marketplace.

And it’s done it in less time than it takes a single drop of rain to make its way from the top of the Blue Mountains, to that underground spring far, far below.

Massy Distribution (Jamaica) Limited – In 2001, the Massy Group, one of the largest conglomerates in the Caribbean, purchased HD Hopwood, an old and well-known distribution company. Today, Massy Distribution (Jamaica) Limited is one of the largest and leading distributors and importers of pharmaceutical and consumer products in Jamaica. It represents over 40 multi-national companies and distributes many leading brands, throughout the island. – www.massydistribution.com