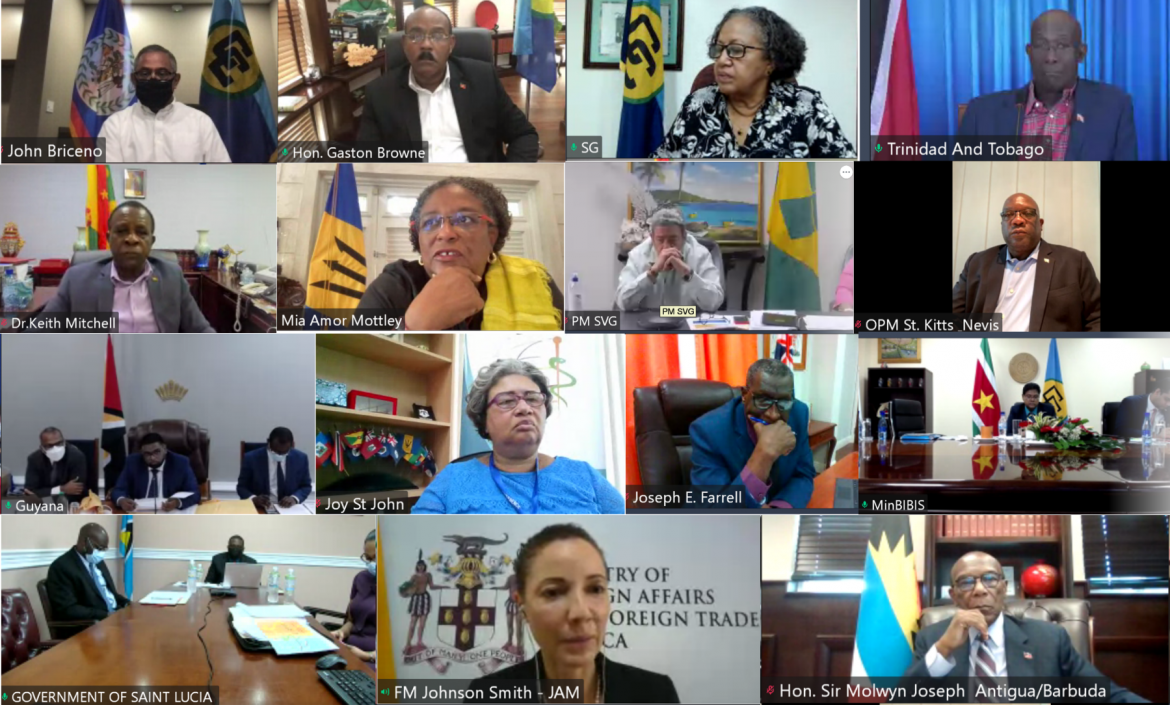 The Conference of Heads of Government of the Caribbean Community (CARICOM) met virtually on Monday 13 September at its 16th Special Emergency Meeting to consider a regional response to the recent surge in infections, hospitalisations and deaths due to the COVID-19 virus across the Community.

They received an update on the pandemic from the Executive Director of the Caribbean Public Health Agency (CARPHA), Dr. Joy St. John, which noted that since the outbreak in March 2020, the Region has seen more than 300,000 confirmed cases with more than 6,700 deaths. Dr. St John stressed that the percentage of deaths was exceedingly high among unvaccinated people with less than one percent of deaths recorded by persons who were vaccinated.

Heads of Government expressed dismay at the rate of vaccination in the Community and the significant incidence of vaccine hesitancy. As of 3 September, according to the Caribbean Public Health Agency (CARPHA), vaccine coverage in the Community ranged from 58.7 percent in Bermuda to 0.1 percent in Haiti. The Heads of Government noted that no country was close to herd immunity and that the increased incidence of mutations and variants made it imperative for there to be a greater improvement in the rates of vaccination.

Heads of Government are strongly urging the people of the Community to get vaccinated, as failure to do so puts the health sector at great risk of being overwhelmed by the surge of COVID-19 cases. They called particularly, on the front-line workers, including nurses, doctors, security personnel and teachers to take the vaccines available given their critical roles in the society.

Heads of Government warned that the threat to the health, economic, education and security sectors was real, and called on all stakeholders to come together on this issue in the interest of the stability of the Member States and the Community. In this context, Heads of Government will consider the harmonisation of travel protocols, including for cruise ships.

Heads of Government agreed to the design of a Community Public Relations Strategy to supplement national campaigns to encourage citizens to vaccinate.

Heads of Government agreed to share excess vaccines, personal protective equipment and test kits. They also agreed to approach the COVAX Facility to grant the Community an exemption, which would allow vaccine doses from the Facility to be reallocated among Member States. They also agreed to continue to advocate for vaccine equity and access as well as financing and debt sustainability at the United Nations General Assembly and the United States Global Covid-19 Summit, both to be held later this month.

Heads of Government also met with representatives of the United States and the United Kingdom to convey the gravity of the regional situation, and to make specific requests for assistance. They requested that the United States deliver the next batch of Pfizer vaccines donated to the Region earlier than originally planned and asked for field hospitals and the accompanying equipment to help ease the current strain on health facilities in Member States.

The request to the United Kingdom centered around the negative impact of the traffic light listing of countries which determines requirements for re-entry to the UK given the importance of that tourism market to the Region.

Dominica Is the Wellness Destination of the...

The Queen Elizabeth Hospital – The heart...