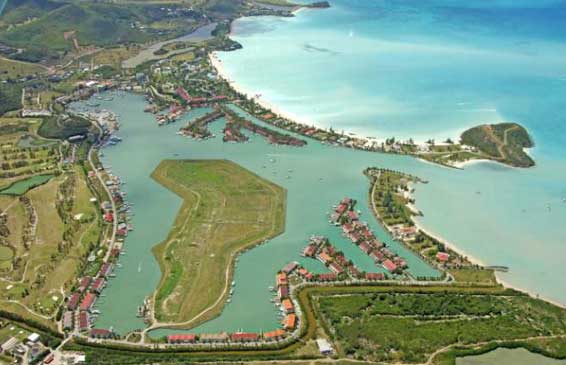 Changing the inland from the coastline

The Port Authority of Antigua and Barbuda is the quasi-governmental institution that oversees the maritime ports on this island country in the Eastern Caribbean. Antigua and Barbuda is part of the nine-member OECS (Organization of Eastern Caribbean States) group, which also includes the Commonwealth of Dominica, Grenada, Montserrat, St. Kitts and Nevis, St. Lucia, and St. Vincent and the Grenadines.

Antigua’s main commercial port is Deep Water Harbour in the capital city of St. John’s. It handles all the cargo that is imported into the country. Also in St. John’s are the Nevis Street Pier and Heritage Quay – both ports of call for major cruise lines. Other, smaller marine ports include Falmouth Harbor and English Harbor on the southeast section of the island, and Jolly Harbor, a little further to the south.

Deep Water Harbor was built between 1965 and 1968, and opened to commercial traffic in 1969. It was constructed as a “break bulk” terminal. In shipping, break bulk cargo are goods that must be loaded or unloaded individually because they are not transported in intermodal containers, but rather in bags, boxes, crates, drums, or barrels. The term break bulk derives from the phrase “breaking bulk” – the extraction of a portion of the cargo of a ship or the beginning of the unloading process from the ship’s holds.

Darwin Telemaque, the current CEO of the Port Authority, is in the second year of his two-year appointment. He came to lead the agency after a successful agribusiness career and as a consultant to the World Bank. One of his missions is to transform the Deep Water Harbor port, which is at the end of its fifty-year cycle, and build a new facility that will help usher in a new economic paradigm, revitalizing not only the port, itself, but the country and OECS region, as well.

According to Telemaque, it wasn’t long after Deep Harbor was built that a major problem arose. “In 1971, containerization reached the Eastern Caribbean, and by that time, the port that was constructed so recently was obsolete in terms of its function,” he explains. “However having constructed a port which was built for a fifty-year cycle, we were stuck with that type of operation – having to force containerization through a break bulk terminal for almost fifty years. But we have to do what we can, so we have been handling it very inefficiently – but we’ve been handling it. It’s very costly; we were not designed for containerization but we have to deal with it. We’ve been hoping for the time to come when that situation would change.”

It seems that time has finally come. In December 2014, Prime Minister Gaston Browne announced that the port would be completely rebuilt with a $225 million investment from the China Civil Engineering Construction Corporation (CCECC), which will be providing funding, manpower, and technical expertise. For Telemaque, the news couldn’t have been timelier. “Not only is it outdated in terms of the current style of operation,” he says, “but the port, itself, has deteriorated. The piles are sinking; the seawall has thinned out to a level where it’s dangerous; the container yard is undulating all over due to depressions. And so the entire environment is at a point where it is pretty unsafe to be operating there, at present.” In fact, in October 2013, the port administration building on the key had to be evacuated because it was slipping into the ocean and starting to collapse. To this day, administrative personnel are working out of temporary quarters.

According to Telemaque, construction should start sometime this December or next January. “And in three and a half years, we should have a brand new terminal,” he declares. “Because the port in Antigua is a decent sized port, we’ll be able to build the new port in sections, so we can easily start off on the western side and continue towards the eastern part of the port, one section at a time. So we’ll probably do it in three sections. We will not see any interruption in terms of the receiving and discharging of vessels, while we construct the new environment, but there will be some challenges. Nonetheless, we’re still going to see that the goods and services required to run the country are imported and exported.”

But Telemaque’s vision for the new port in St. John’s goes far behind the mere handling of cargo. “We believe that the time of considering ports just to be basic locations where we discharge cargo has come and gone,” he says. “The port has to move further along the supply chain. It has to offer more services; it has to be more efficient; it has to expand and open itself to create an economically facilitating environment that can lead, ultimately, to what every government and every citizen hopes to achieve: social transformation and economic enhancement. This is the driving force of what we’re establishing – a port that will help in transforming the country. And so we’ve coined a phrase for its development, which is ‘Changing the inland from the Coastline.’”

Telemaque continues outlining his overarching vision: “We think that it is the port that is going to lead to the type of economic transformation that we need, considering that at this point, we import almost everything that we use. Our basic needs – food, clothing, and shelter – come to us by ocean freight. We think that by more efficiently handling that service and delivering a more efficient service to the private sector, the shipping lines will begin to trust that the Port Authority is efficient, thereby reducing the cost of services to the island. And the vendors, merchants, and supermarkets, will also recognize that the port is actually aiding in their profitability as well as a reduction in the cost of living and an improved quality of life for all Antiguans.”

Plans for the new port include the creation of what Telemaque calls a “logistics park,” which he believes can ultimately become the center of maritime commerce for the entire OECS region, providing a duty-free environment where goods can not only be imported, but where manufacturers and exporters can manipulate loads and get them to and from the neighboring islands. “So we’ll bring the bulk cargo here,” he says. “The port is big enough to facilitate that type of service and then we’re trying to see if through the logistics park, we can create some exports.”

In addition, the new port terminal is being designed to attract private businesses that will be able to replace some of the services now provided by the Port Authority. “Currently, the Port Authority is the regulator and service provider,” states Telemaque. “By becoming just a regulator, we can allow the businesses, themselves, to structure services that we would never get involved in. We believe that a combination of a well-structured logistics environment at the marine terminal can filter into all the islands and thereby create a logistics chain that can be attractive to businesses.

“Additionally, the current warehouse is owned and operated by the Port Authority. We are proposing that we build it and then engage the private agents, brokers, and NVOCCs (non-vessel operating common carriers) so that they can operate their businesses there. We would move to a one-stop shop environment in a dual-level facility. You would have agents on the bottom floor providing services to their customers and on the top we will have customs, the Port Authority, and all of the services that customers today have to visit six different buildings for. With the new environment, we believe, for the first time, we’re going to see an effective, competitive environment where it will not be the Port Authority offering one service, but different agencies competing to provide a wide array of services that we, right now, don’t do because our business model doesn’t really allow us to facilitate them.”
Working in a new port’s favor, according to Telemaque, is not only its large size, but the fact that it was never really developed on a broad scale. “We have wide-open spaces that we can look at and create the type of environment that can facilitate not just the services that we want, but we can structure it so that businesses can be engaged and the neighboring islands can also be facilitated,” he says. “We are looking to see how we can utilize the space here to facilitate transshipment, storage, and some light manufacturing, and then forward those benefits to the neighboring islands.”

Finally, Telemaque believes that a new port facility will help diversify and grow the Antiguan economy which, for many years, has relied mainly on tourism. “Antigua has done well with tourism, we love it and we want to keep building on it,” he explains. “But tourism cannot provide the total numbers of employment that would create the macro-impact that the economy needs. The tourism product is a six month period; it can’t absorb the broader level of employment in the country. In diversifying and growing the economy we need to move in different directions.”

Indeed, Telemaque believes that a rebuilt port will, in the long run, actually help to enhance tourism on the island by increasing employment. “Creating a diverse environment that can reduce unemployment will enable it to be more conducive for visitors and for business. A socially dilapidated environment is not attractive to tourism, but when there are less idle hands, you have less social challenges. When people are employed, the social enhancement becomes a far more reachable objective and the whole experience changes. You have better homes; you end up with more taxes so that you can make better streets; and you end up with happier people and your visitors are treated better. And we believe that those things, combined together, will create a more buoyant, stronger, tourism product. So, diversification helps.”

In addition to the new marine terminal, Antigua is also completing construction of the new, state-of-the-art, $98 million, V.C. Bird International airport. Together, these two new facilities will help position Antigua and Barbuda as the leading trade hub for the Eastern Caribbean. And, perhaps, within the next few years, Darwin Telemaque’s vision will become the county’s new dynamic, and the inland will truly be changed and renewed for the better – from the coastline.

WHO: The Port Authority of Antigua and Barbuda
WHAT: A quasi-governmental agency responsible for the islands’ maritime ports
WHERE: Headquartered in St. John’s, Antigua
WEBSITE: www.port.gov.ag

Study Concluded on Cost of Fishing in...