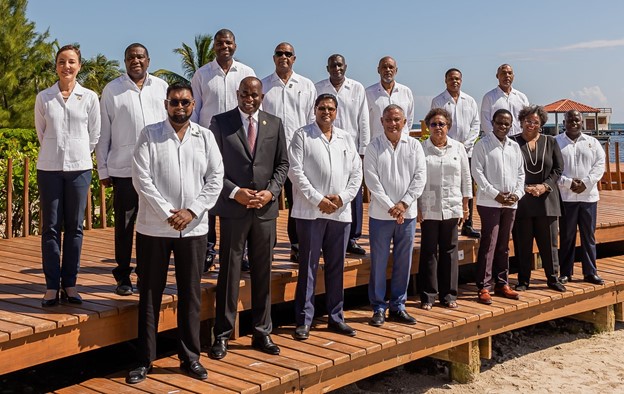 The Thirty-Third Inter-Sessional Meeting of the Conference of Heads of Government of the Caribbean Community (CARICOM) was held on 1-2 March 2022.

The Secretary-General noted that the Community over the 49 years of its existence has been bound together, particularly, in times of adversity and this was such a time.  She advised that going forward, as CARICOM celebrates its 50th Anniversary, it must use its achievements as the foundation for building a resilient Caribbean Community.

The Prime Minister of Antigua and Barbuda stated that the Community must continue to be vigilant in managing the threats to sustainable development including de-risking, the proposed global minimum corporation tax and sanction-listing of so-called uncooperative jurisdictions by the OECD and  European Union. Climate change, he said, remained the most significant existential threat facing all of humanity   and noted the hopes of people in so many countries around the world, for meaningful action on the climate emergency, were dashed against the rocks of the obstinate and selfish attitudes of developed countries and large corporations assembled at COP26 in Glasgow, last November.

The Chair of the Conference, Prime Minister of Belize stated that the Thirty-Third Inter-Sessional Meeting was a particularly consequential meeting which was taking place at a time when unprecedented and existential challenges coincided with our citizens’ expectations for relief and prosperity. He condemned in the strongest terms the unjustified invasion of Ukraine by Russia and called for an immediate cessation of hostilities and immediate and unilateral withdrawal of all Russian troops from Ukraine.

The Prime Minister observed that CARICOM was contending with the worst economic recession in modern history. To foster our recovery, he said the Community needed to rekindle the founding vision of CARICOM both with respect to the scale of its ambition for integration, and the speed which was needed to achieve its consolidation. Our recovery, he said should be aligned to a new regional agenda that was centred around creating prosperity for the people.

COVID-19 AND ITS IMPACT ON THE REGION

Heads of Government acknowledged continued comprehensive response to COVID-19 in the Region by the Caribbean Public Health Agency (CARPHA), the CARICOM Secretariat and the Pan-American Health Organisation. They agreed that Member States would continue to support the multi-sectoral and inter-sectoral regional public health response that has been successfully led by CARPHA supported by the Regional Security System (RSS) and other Regional Institutions.

They also acknowledged that the economic impact of the COVID-19 pandemic has required that Member States re-imagine their development strategies and global economic engagement towards building back better with more sustainable and resilient economies. In that regard they mandated the Caribbean Development Bank (CDB), to coordinate the formulation of a regional resource mobilisation strategy to raise the funding required to drive the economic recovery programme.

Heads of Government stressed the need for the continuation of public health measures including masks, testing, isolation and quarantine and supported CARPHA’s recommendations for safe and sustainable air and sea travel to protect the Region. Heads of Government noted the challenges in achieving desired levels of vaccination. They therefore agreed to mount a regional campaign to combat the disinformation that encourages vaccine hesitancy. Heads of Government agreed to explore a regional strategy for manufacturing vaccines in the Region.

Heads of Government agreed that implementation of the CSME is the Region’s best option for responding to the current development challenges and for building a more resilient Region. They further agreed that immediate urgent action on CSME implementation was imperative. In that regard they endorsed the Action Plan for an Effective CSME and proposals for immediate action involving the Organs of the Community, Cabinets and Ministries of Member States, stakeholders, particularly the private sector, and the CARICOM Secretariat to hasten implementation.

Heads of Government adopted and opened for signature the Protocol to Amend the Revised Treaty of Chaguaramas Establishing the Caribbean Community including the CARICOM Single Market and Economy to allow Enhanced Cooperation among Member States and to address Related Issues.

They requested that urgent attention be given to the strategy for development of the energy sector including the CARICOM Energy Policy (both in respect of fossil fuels and renewables) as well as to address the issue of local content.

Heads of Government established an Open-Ended Working Group on Local Content for Sunrise Industries with core membership from Antigua and Barbuda, Barbados, Belize, Guyana, Jamaica, Saint Lucia, Suriname and Trinidad and Tobago. They also agreed that the CARICOM Private Sector Organisation (CPSO) would participate in the Working Group. They mandated the Secretariat to undertake further work on identifying ten major non-food items imported into the Region for which there is production capacity and potential and significant demand considering that these could constitute priority products for investment and trade within the Community

Heads of Government agreed that early decision-making as well as cross-sectoral inter-agency regional and national actions were needed to support the economic recovery and transformation of CARICOM Member States. They therefore agreed to resuscitate the CARICOM Economic Recovery and Transformation (CERT) Working Committee under the guidance of Prime Minister Mottley, to serve as a clearinghouse for the many recommendations being tabled and to guide the economic recovery and transformation process in the Community.

They also agreed that the Working Committee would be open-ended, with core membership comprised of The Bahamas, Barbados, Belize, Grenada, Guyana, Jamaica, Trinidad and Tobago, and the Governor of the Eastern Caribbean Central Bank (ECCB); and would be coordinated by the Secretary-General.  They further agreed to include the President of the Caribbean Development Bank, the Chief Executive Officer of the CARICOM Development Fund and the Chair of the CARICOM Commission on the Economy as members of the Committee.

Heads of Government commended the Ministerial Task Force (MTF) on Food Production and Food Security, and the leadership of His Excellency Dr. Mohammed Irfaan Ali, President of the Co-operative Republic of Guyana, Lead Head of Government in the CARICOM Quasi Cabinet for Agriculture, on the work completed in advancing the CARICOM Agri-Food Systems Agenda.

Heads of Government agreed to modernise current production methods including digitalization and greater use of technology, emphasise human resource development including youth involvement, and focus on research and development.

Heads of Government recognised the challenges to the achievement of the reduction of the Region’s food import bill by 25 per cent by 2025 and the need for increased financial support, including though national budgets. In that regard, they committed to addressing the investment required and the attendant implementation timelines to achieve that objective and agreed to the staging in Guyana of an Agricultural Investment Conference on 19-21 May 2022 to accelerate the process of identifying alternative financing solutions.

They welcomed Guyana’s offer of 25,000 acres of land to facilitate corn and soya production as well as to train 30 persons in the construction of shade houses aimed at increasing agricultural productivity and output. Heads of Government also welcomed the offer of Suriname of land for agricultural production. Heads of Government undertook to intensify efforts to remove all Non-Tariff Barriers to intra-regional trade.

Heads of Government received a report from the Chair of the Council for National Security and Law Enforcement (CONSLE). Heads of Government agreed that the support and cooperation of major partners, both nationally and regionally, including strong information and intelligence sharing were required to win the battle against Transnational Organised Crime.

Heads of Government agreed to support the development of a regional Crime Guns Intelligence Unit which would function as an early warning system and a support mechanism for national firearms investigations. Heads of Government also agreed that there was urgent need for both intra-regional and international cooperation to address effectively maritime and cyber threats.

Heads of Government agreed that the Caribbean Automated Biometric Identification System (CABIS) was necessary, especially as the Region moved toward full implementation of the CARICOM Single Market and Economy (CSME), in support of the free movement of CARICOM citizens and residents. They mandated the CARICOM Secretariat and CARICOM IMPACS to conduct needs assessments for a regional data privacy policy as well as the legislation required to cover such a System.

Heads of Government welcomed the signing of the Declaration of St George’s Towards the Reduction of Intra CARICOM Roaming Charges to Facilitate the CARICOM Single ICT Space and the CARICOM Single Market and Economy. They noted that while the new roaming arrangement did not provide for complete elimination of roaming charges within the CARICOM space, operators indicated that savings would be on the order of 70-98 per cent depending on the service and the market.

We, the Heads of State and Government of the Caribbean Community strongly condemn the military attacks and invasion of Ukraine by the Russian Federation and call for an immediate ceasefire and an end to all acts of aggression, the urgent withdrawal of Russian military forces in Ukraine. Any concerns the Russian Federation may have must be resolved diplomatically and not through warfare.

We reaffirm the purposes and principles of the United Nations Charter and call for respect for the territorial integrity and sovereignty of Ukraine. We call on all parties involved to urgently intensify diplomatic dialogue and to immediately de-escalate hostilities and work towards sustainable peace.

The invasion of Ukraine is causing untold loss and destruction of life and property for the civilian population of Ukraine, including women and children, in violation of international humanitarian law, and has caused a growing humanitarian crisis.

We express appreciation to the Governments and people of neighbouring countries who are extending humanitarian services to refugees fleeing Ukraine.  We are particularly concerned about the plight of and discrimination against non-European nationals and call for the guarantee of the safety and security of nationals of the Caribbean, Latin American and Africa and from those countries who are seeking to leave Ukraine.  In this regard, we underscore the importance of respect for human rights and the human dignity of persons in keeping with international commitments.

We reiterate that the principles of respect for sovereignty, territorial integrity, non-interference in the internal affairs of another sovereign state, the prohibition on the threat or use of force, and the peaceful resolution of all disputes must be adhered to by all nations.

The Caribbean as a Zone of Peace

The Caribbean Community (CARICOM) is concerned that the military confrontation taking place in Europe could have repercussions in the Region. The Community strongly rejects any attempt to deploy military assets that can elevate tension and threaten the peace, territorial integrity, and sovereignty of this Region. The Community is resolute in its affirmation of the Caribbean as a Zone of Peace and calls on all countries to refrain from actions that undermine the Declaration made in 2014.

All the Statements are available at www.caricom.org.