The Government of St. Vincent and the Grenadines

The Government of St. Vincent and the Grenadines

Business View Caribbean Magazine features an exclusive interview with the Prime Minister of Saint Vincent and the Grenadines, Ralph Gonsalves.

In a recent interview with Business View Caribbean, Prime Minister Gonsalves shared his insights about St. Vincent and the Grenadines from the perspectives of tourism, infrastructure, employment, social issues, and environmental challenges, along with his candid outlook for the future of this remarkable country. The following is an edited transcript of that conversation. 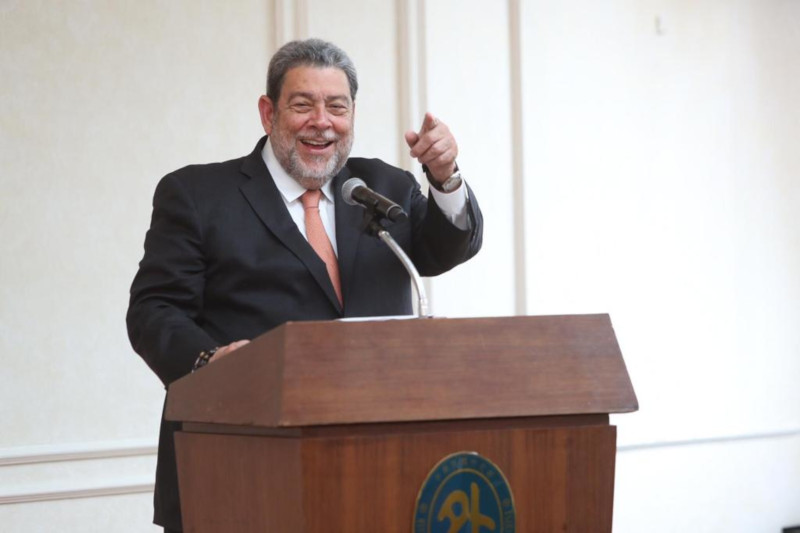 BVC: Congratulations on your country’s 40th anniversary of independence. How is the Government marking this special milestone?

Prime Minister: “There are two initiatives, one is called “Renewal at 40” and the second is “Sports Against Crime.” The theme Renewal at 40 is basically for us to take a fresh guard: to see what new initiatives we can take; and the things which we have been doing, how we can do them better in all dimensions of life, living, and production. Renewal at 40 is across all the Ministries – Finance, Agriculture, Tourism, Fisheries, all the production Ministries, and of course Education, Culture, and Sports; as well as the general issue from our own history, what lessons we can learn to help uplift further the Caribbean civilization and this magnificent Vincentian complement. That’s really Renewal of 40 in a broad, conceptual sense.

“Sports Against Crime seeks to build on an initiative, which is now a few years old, called “Pan Against Crime” where we have 20-odd steel pan sides attached to community pan sides and schools and the like. We want to use all the mechanisms and institutions of the state apparatus in relation to security to work with the Ministry of Sports to touch young people and others in the communities through sports to see how we can have a reduction of crime, particularly serious crimes. This year, we have seen a significant reduction in crime, especially homicides, and that is very encouraging. Those are the two initiatives we are using, in a sense, to mark and uplift and enhance much of what we have been doing in the last 18½ years in government.”

BVC: What other goals is the administration hoping to accomplish?

Prime Minister: “We have achieved quite a lot, still there is more to be done. Metaphorically speaking, where are we? I want to take you back to 1445 BC. The Israelites had been led out of Egyptian captivity and found themselves at the foothills of Mount Sinai, and you see them seeking to lay down a set of rules and codes for life, living, service, and production. Recently, we commemorated 185 years since the abolition of slavery in our country and, this year, 40 years of Independence. So, metaphorically, we are at the foothills of Mt. Sinai, and we are seeking to elaborate further our rules, our processes, our policies for life, living, service, and production. And we’re doing it in an era of rapid changes, modern globalization and trade liberalization, and the revolution of information technology and biotechnology.

“When we came into office in 2001, it was the first time a Government had been in power since 1763 that an agricultural commodity was not the mainstay of the economy. For successive years, you had sugar, cotton, arrowroot, bananas. So, we met a country unprepared for this new world. To strategically do anything, we had to engage in a quest to build a modern, competitive, many-sided, post-colonial economy; which is at once national, regional, and global. Every one of those words is pregnant with real meaning.

“Modern – you have to be using science and technology. Competitive – to make sure you can sell your goods and services in whichever niche marketplace may be available; regional or global. And you have to have many-sidedness to the economy – not just a single crop or industry. Post-colonial simply means that there are no preferences anymore, and no one owes you a living. It has to be national; it has to be regional; and it has to global – that means you have to engage in a set of regional arrangements – that’s OECS and CARICOM. And globally, you’re part of all the hemispherical and international entities and agencies to make your presence felt, so that you can sell your goods and services better. And in the process, add to your own contribution to things, like reducing the effects of adverse climate change, and peace and security and prosperity, globally.” 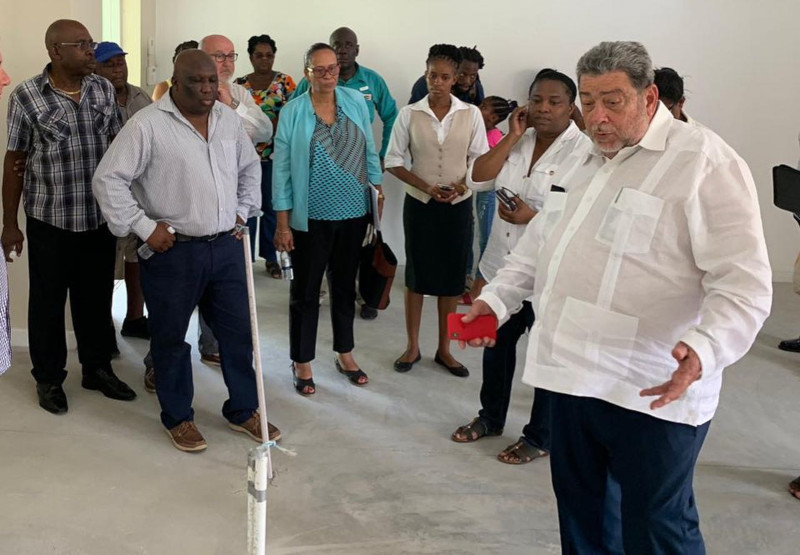 BVC: How are you positioning to achieve this quest?

Prime Minister: “To do this, we have to address a number of cross-cutting issues. Thirty-nine percent of 12-year-olds were at secondary school when I arrived. I had to make sure that by 2005, every 12-year-old was at secondary school. And we had an overall education revolution which is evolving, advancing, consolidating; tremendous work has been done, right from early childhood to university. And with other areas that are not mainstream, like addressing students with special needs, and continuing studies for adults. That’s the first thing.

“Secondly, we wanted to get into services – tourism clearly has to be one of the major services – but I couldn’t do that without a jet airport in the Grenadines. Internally, we had to unite every part of the country. Thus, we had to build a bridge to span the divide which existed between the northeast of the country, the poorest area, and link that to the rest of the country and build roads. Then, we had to expand the IT infrastructure; in fact we’ve just done some work with fiber optic cables around St. Vincent and between St. Vincent onto the Grenadines and Grenada. It’s a huge project financed by the World Bank to provide first-world internet services.

“Also, electricity is very expensive and the question of security of energy supply is problematic. So by Feb. 2022, we will have 80 percent of our electricity generated by renewable sources. We have, at the moment, just about 20 percent by hydro; we have a small percentage by solar and that’s expanding; and we’re now doing geothermal exploration, because St. Vincent is a country of volcanic origin. And we are in the process of getting a new, modern port.

“Tourism is full-fledged now. We have 150 square miles of land mass, but we have 11,000 square nautical miles of seascape. So we are aggressively into the fishing area, and expansion is taking place there. And we have just established a modern medical cannabis industry. We’ve issued medical marijuana licenses to different entities from overseas, and several traditional cultivators on St. Vincent have received licenses. Economically, we are trying a lot of things.”

BVC: Looking to the future, what do see ahead for St. Vincent and the Grenadines?

Prime Minister: “All the statistics will show that when we arrived here in 2001, indigence was 26 percent of the population; now it’s about three percent. Undernourishment percentages have dropped considerably. Immense changes have taken place in the area of poverty reduction. And we’re expanding health facilities, port facilities, collegial facilities, our foreign policy is more active. We have recently become the smallest country ever to sit on the Security Council of the United Nations (Jan 1, 2020 to Dec 31, 2021). Meanwhile, we continue to deepen our democracy and good governance.

“Looking ahead, we want to reduce poverty and hunger. We have a ‘Zero Hunger’ program, which is trying to deal with some intractable elements of pockets of poverty. We have to generate more jobs in agriculture (including medical cannabis), fisheries, and tourism sectors to create more wealth. In 1999, St. Vincent had a nominal GDP of 330 million U.S. dollars, now it’s in excess of 810 million. In five years, the average per capita GDP has moved from $2,700 U.S. to $8,000-plus U.S.

“Under 70 percent of people had pipe-borne water in their homes, now it’s about 99 percent. There’s a similar situation with electricity. We’re well-served in public health; in primary healthcare, in secondary healthcare, and we have arrangements where we address gaps in tertiary healthcare to satisfy the peoples’ requisites. All the indicators show there is a significant forward movement, but we have to reduce the extent of unemployment. We have to make sure that the land is completely peaceful. We are an archipelago state – 32 islands with a wide seascape – and there are problems with the flow of small arms coming here. Even with the Coast Guard and radar systems, some get through. But we are tackling the large strategic issues in an efficacious way and getting good results.

“As for infrastructure, the geothermal project has a $100 million U.S. cost and the financing is already arranged for that. The modern port is over $150 million and that is also arranged – $40 million is a grant from the British government. We have three private-sector hotels commencing construction or about to start, and two state-owned ones. And the Grenadines improvements are moving very well. So, we are in a good place to make ourselves more competitive and deliver better service to the people.”

BVC: What are the most important points we should know about St. Vincent and the Grenadines?

Prime Minister: “That St. Vincent and the Grenadines is a serious place undergoing socio-economic transformation – where incomes are rising; the economy is getting stronger, even in a fairly hostile world where there are a lot of contradictions. And that, globally, we are friends of all and we strive for a better world.”

Who: The Government of St. Vincent and the Grenadines

What: An exclusive conversation with Prime Minister Ralph Gonsalves

Where: Kingstown, St. Vincent and the Grenadines

Look at all the international indicators and you will see that our country is doing well and moving absolutely in the right direction. The majority of the people are behind us, that’s why we’ve been winning elections since 2001; because we have done good work and delivered for the people. When you’ve been in office for almost 19 years, someone will find a minor issue here or there to disagree with, but I’m not a person obsessed with side shows. I’m concerned about the main event.