The Ministry of Communications and Works – BVI

The Ministry of Communications and Works – BVI

Tending to the key issues

Business View Caribbean profiles The Ministry of Communications and Works – BVI, an arm of the Government of the British Virgin Islands

The Ministry of Communications and Works is the arm of the British Virgin Islands Government responsible for the territory’s roads, bridges, water, sewage systems, energy, telecommunications, and seaports. Its mission is to ensure the continued development and maintenance of the territory’s infrastructure and make sure that all public utilities and amenities are reliable and affordable, both for BVI’s residents and visitors.

The Honorable Mark Vanterpool, Minister for Communications and Works, puts the Ministry’s primary role more succinctly: “We tend to most of the constituents’ key issues,” he says. Vanterpool has been a member of Virgin Islands House of Assembly, representing the 4th District, and was first elected in 1999. He was appointed to his current post in 2011.

While BVI’s Constitution holds the Minister responsible for the Ministry’s overall agenda, its daily operations are managed through a system of departments, offices, and units, and statutory bodies and committees. “For example,” says Vanterpool, “the Director of Public Works, the Director of Water and Sewage, and so on. And then we have corporations to oversee certain major aspects. For example, we have the BVI Ports Authority, which looks after the ports. It’s a hundred percent government-owned company. I appoint a Board; that Board appoints a Managing Director with the approval of the Cabinet. So, they run the Ports Authority affairs. It’s not my responsibility on a day-to-day basis.”

And yet, Minister Vanterpool points to a broad portfolio of projects – both achieved and planned – that proves that his Ministry does take its responsibilities very seriously. Noting that tourism is a major pillar of BVI’s economy, Vanterpool reports that the government has invested very heavily over the past three years in a cruise ship development project designed to substantially boost tourist visits to the territory.
“We’ve extended our cruise ship dock to accommodate the biggest ships that can hold four to five thousand passengers,” he says. “Prior to that we could only accommodate ships in the two thousand passenger range. That new cruise ship dock began to operate at the end of April, last year; we opened the pier side in December.” Adjacent to the new dock and pier complex is Tortola Pier Park, a five-acre development that features commercial, entertainment, green space, restaurant, and shopping facilities.

Getting tourists to come to BVI is crucial to the economic lifeblood of the territory. “We suffered a downturn in our tourism product after 9/11, because persons were not keen on travelling for a little while after,” Vanterpool explains. “That has rebounded quite well. We got a little bit of slowdown after the 2008 recession, but, fortunately, we’ve been growing fairly steadily from a tourism standpoint, especially since 2010-11, and up until now. Our visitors, by the end of 2015, would have surpassed 400,000, compared to in the low 300s a few years back.” The new pier facilities helped BVI secure contracts with two of the major cruise companies – Disney and Norwegian – who have guaranteed the territory 425,000 passengers on an annual basis. “Along with other ships, we are already projecting in 2016, about 700,000 passengers for the year,” Vanterpool exclaims.

In order to build the new cruise pier, Vanterpool says that $50 million was borrowed from local banks with another six or seven million raised from local investors, both sectors forming another major pillar of the BVI economy. “We have been fortunate to be very attractive to banks and financing,” Vanterpool admits. Recently, he adds that the government borrowed another $35 million for an expansion of the territory’s electricity generation; it is planning to add another 24 megawatts of power to its current 40MWs. In addition, the Ministry generally budgets about $30 million per year – 10 percent of the territory’s annual revenue – for capital projects.

One of those planned capital projects is a runway expansion at the Terrance B. Lettsome International Airport at Beef Island, which Vanterpool says will cost between $150 and 200 million. The goal is to enable BVI to receive more direct flights from places such as Miami and New York. Currently, the territory is one of the few places in the Caribbean where a traveler has to make an extra stop before arriving.

The Ministry of Communications and Works is also making a major push to expand BVI’s broadband access. Its appointed Telecommunications Regulatory Commission oversees four licensed operators in the territory. “We have the right connectivity,” says Vanterpool. “We are very well interconnected through the undersea fiber optic cables. So, the capacity is there and we are pushing the telecommunications operators to expand their broadband offerings at an affordable rate to the public – more bandwidth and faster speeds to the residents and businesses.”

BVI is also pursuing what Vanterpool calls its “green energy initiative.” “For example,” he says, “in the recent past, we have changed all of our public street lighting in the city to either LED or solar lights; and we’re doing that throughout the territory, as the next step. We’re seeking to develop wind energy, more solar energy, and any other renewable energy, such as wave energy, and so on. We’re going to be using rooftops and other areas for solar. It’s a major plank that we have and we are pushing very hard.”

“I think we’re at a point in the territory’s history, where we’re making major upgrades to our road system,” adds Vanterpool, enumerating yet another Ministry initiative. “We’re also doing some major works to improve our ports throughout the territory.” He continues: “Roads, water, sewage – on all the islands, to make sure that residents and visitors can be more comfortable. It’s all within our plan to improve our financial services business and our tourism product so that people can have good roads to drive on, a decent airport, good ports, and a consistent supply of electricity and water. Also, we are focusing on making our city a bit more modern than it has been – especially to keep it clean and greener. We’re building more open space parks and providing easier access to transportation through the city, as well as better pedestrian access – things for the territory to grow and develop.”

In other words, the Ministry of Communications and Works is doing its job – tending to most of the constituents’ key issues.

Check out this handpicked feature on Digicel in the British Virgin Islands.

WHO: The Ministry of Communications and Works

WHAT: An arm of the Government of the British Virgin Islands

The Jamaica Chamber of Commerce 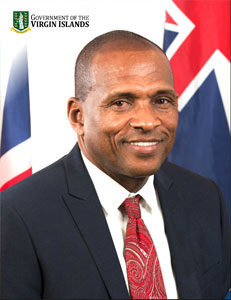