It’s an odd business whose founders launch it with anything but making money in mind. Yet, according to Howard Mitchell, the Executive Chairman of Corrpak Jamaica Ltd., that’s exactly how this particular company began. “We didn’t start with the profit motive being the primary thing,” says Mitchell who created Corrpak in 2006 with his business partner, G. Raymond Chang, a well-known Canadian-Jamaican businessman and philanthropist. “The master plan was to provide import substitution for local manufacturing, to provide employment, and to train Jamaicans into skilled workers.”

Mitchell says that he and Chang were responding to a request from the then President of the Jamaica Manufacturing Association, Doreen Frankson. “She knew that we had done some investments in Jamaica and that we were looking for things that gave value-added to the Jamaican economy,” he says. “She came to us and said, ‘You need to do something about packaging because we’re importing most of it. There are no manufacturing companies doing corrugated cardboard packaging on any great scale in Jamaica. And as a result, our manufacturing is suffering because we’re dependent on the whims and fancies of overseas suppliers.’ When you’re manufacturing and you have to import everything you’re at the mercy of the market,” Mitchell adds. “So we started a company.”

Today, Corrpak’s management systems are ISO certified and it is a full-service corrugated box manufacturing company. It designs, manufactures, and sells regular slotted cartons, die cuts, partitions, trays, and pads, mainly to large food and drink distributors. “Our big lines,” says Mitchell, “are gallon boxes, trays, and pads, and we also have quite a substantial area with canned goods and large-volume bottled goods. We also have developed a line for the wet products – seafood, meats, chickens – water-resistant, corrugated cardboard packaging.”

In Corrpak’s first year, it captured about six percent of the market. “We now have about 40 percent of the total market and we are one of the two largest manufacturers of corrugated cardboard packaging in Jamaica,” Mitchell says. “We have about 100 employees; we started with 22.”

Now that Corrpak has assumed a more standard business persona, Mitchell says that his goal is for the firm to become the largest producer of its kind in Jamaica. “We are one of two companies in Jamaica that do packaging from scratch, that is, from raw paper. We share the majority of the market. The only other companies in this market of any significant note are importing products from Trinidad, Costa Rica, and the Dominican Republic.”

According to Mitchell, even though, today, Corrpak does business with the majority of the large Jamaican manufacturing companies, the key to its future profitability lies in exporting its products abroad. “What we’d like to see is a strong export division in the next three years,” he states. “We would like to see that our product base is split 70 percent local and 30 percent export. The future is export, as far as we’re concerned.”

Corrpak’s initial targets will be the islands of the Caribbean, and other nearby countries. “We have duty-free access into the CARICOM market, and we have some free-trade agreements with the Dominican Republic and Costa Rica, and soon, Colombia,” Mitchell says. “Our focus is going to be first on CARICOM. Water-resistant corrugated cardboard packaging is what we would try and spearhead into the Suriname, Belize, Guyana market, because they’re big on seafood – shrimps, lobsters, crustaceans – which require fairly durable, moisture-proof packaging. And Cuba is looming large on the horizon. We think that in those areas, we have quite a large export market that will keep us busy for the next five to seven years.”

Investing in Corrpak’s infrastructure is one sure way to ramp up the volume and quality of its product lines. Mitchell elaborates: “We create corrugated cardboard from paper – we take the paper, we bond it, corrugate it, then we convert it to the shapes and sizes and thickness and density of the board that the customer requires. In the last quarter of last year, we acquired two new machines from China – one a five-color printer/die cutter, and the other a very fast auto-folder/gluer. We improved our conversion capacity by the acquisition of two machines capacity by about 50 percent.”

The company also expanded its footprint. “The first quarter, this year, we acquired another 8,000 square feet of warehouse space, adjoining our present factory and we are about to build out that area within the next three months,” Mitchell says. “That will give us increased raw material capacity and increased finished goods capacity. One of the advantages that we try and use against imported products is that we can offer the customer just-in-time products. So, being able to store more finished goods means that the customer does not have to hold inventory; we will supply the inventory. Hopefully, by the end of this calendar year, we will have increased our production capacity by about 30 percent.”

Even as Corrpak continues to prosper and grow, Mitchell asserts that in one very important way, the company he began with Chang is still rooted in the founders’ original mission – that of providing employment opportunities for Jamaican youth. “We are a successful Jamaican manufacturer in a very difficult economic environment,” he says. “But here is a company that does more than make a profit. We’re based in a very underdeveloped section of the city and we take kids from the ghetto and we make them into productive, skilled individuals.”

Sometimes it’s not only about the money.

Check out this handpicked feature on Rentokil Initial Jamaica Limited.

ALTURA Caribbean Limited – We Deliver and... 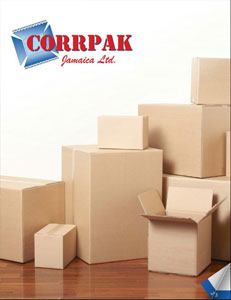