Providing water and power to the citizens of the territory

The Virgin Islands Water and Power Authority (WAPA) was created by the Virgin Islands Legislature in 1964. Its purpose was to produce and distribute electricity for homes, businesses, and all institutions of government across the territory, including: St. Thomas, St. Croix, St. John, Water Island, and Hassel Island. In 1987, the responsibility of producing and distributing potable water was added to WAPA’s portfolio. Finally, in 2001, the agency was further charged with the task of installing and maintaining street lighting in the territory’s urban and rural residential sections. As a semi-autonomous government agency, WAPA is considered a not-for profit public corporation that contributes directly to the Virgin Islands Government’s budget through an annual payment in lieu of taxes to the Virgin Islands Treasury.

WAPA also provides potable water to around 13,000 customers in the major commercial and residential centers of Charlotte Amalie (St. Thomas); Christiansted and Frederiksted (St. Croix); and Cruz Bay (St. John); as well as certain subdivisions. (Only about 25 percent of the Islands’ citizens get their water through the utility, as all homes have been required by law to have built-in cisterns to catch rainwater.)

Hugo V. Hodge, Jr. WAPA’s Chief Executive Officer, states the agency’s overall mandate: “To provide dependable, reliable, and cost-effective water and power to the citizens of the territory.” In order to achieve that goal, WAPA has consistently explored and implemented innovative and strategic ways of upgrading and/or replacing the Islands’ legacy power and distribution systems. “Our biggest project right now,” according to Hodge, “is the conversion of our generation facilities from fuel oil to LPG (propane), LNG (Liquefied Natural Gas), or oil, so they can burn three different fuels.” The multi-year project, which is nearing completion, recently received its first tanker shipment of propane at WAPA’s St. Croix terminal. Hodge relates that the conversion process is being closely watched around the world and that, ultimately, the huge project will have “significant savings for the rate payers.”

Additionally, WAPA is aggressively expanding its renewable energy options to further offset the territory’s high electricity costs due to its traditional dependence on fuel oil for power generation, as well as to help minimize the impact of global warming from fossil fuel combustion. “We have two, four mega-watt solar farms online right now,” says Hodge, “and two, three mega-watt solar farms being built. We’ve got a seven and a half mega-watt Biofuel plant on St. Croix being built, and we’re negotiating for seven to ten mega-watts of wind power on St. Thomas.”

Hodge also says that 15 mega-watts of electricty – approximately 13 percent of WAPA’s peak generation of 115 mega-watts – are generated through its net metering program via individual rooftop solar installations. (Net metering is a billing mechanism that credits solar energy system owners for the electricity they add to the grid. For example, if a residential customer has a PV ((photo voltaic)) system on the home’s rooftop, it may generate more electricity than the home uses during daylight hours. If the home is net-metered, the electricity meter will run backwards to provide a credit against what electricity is consumed at night or other periods where the home’s electricity use exceeds the system’s output. Thus, customers are only billed for their “net” energy use.)

Finally, Hodge says that WAPA is also doing a full conversion of its systems to AMI metering. AMI (Advanced Metering Infrastructure) is an integrated system of smart meters, communications networks, and data management systems that enables two-way communication between utilities and customers. “That should be finished by the end of the year,” he says. “And we also have an RFP that we’re in the final stages of reviewing to convert all of our street lights to LED (Light Emitting Diode) with controls. So there’s a lot going on here at the utility.”

When all of these processes, upgrades, and conversions are finally operational, Hodge believes that the U.S. Virgin Islands will be a world leader in combating its dependence on fuel oil. “By adding flexibility to the system and the aggressive nature in which we’re bringing renewables onto the grid, you’ll see some of the highest percentages of peak, here, that you’ll see anywhere,” he states, proudly. “When you take our net metering and what we have grid-tied – that’s 20 percent of peak, or 23 mega-watts of our system which is peaking at 110. That’s unheard of in most places. And we’re going to double that,” he adds. In fact, WAPA is an integral part of the Virgin Islands’ efforts to reduce fossil fuel usage in the electricity and transportation sectors by 60 percent by 2025.

Lastly, Hodge also talks about WAPA’s water system and plans for its improvement: “The water is all desalinized,” he says. “We recently converted all our de-salinization plants from thermal to reverse osmosis, so the next big thing for the water system is an upgrade of all of the transmission and distribution pipes. The lines are 70, 80 years old. Some of them have some rust; or the lining is gone. That will be a big, multi-year project – somewhere between $300 and $800 million, territory-wide.” Hodge believes that the system upgrade will improve water quality and virtually pay for itself by reducing water loss and the need to flush the system so frequently.

Earlier this year, WAPA’s accomplishments were recognized and lauded by Vice President Joe Biden in a speech he gave at the Caribbean Energy Security Summit in Washington, D.C. “Some people out there think that it can’t be done in the Caribbean,” he said. “They are dead wrong. Not only can it be done, it is being done right now. Look at what the U.S. Virgin Islands are doing. They’re combining renewable energy with propane to lower costs and secure their supply, saving rate payers 30 percent on electric bills. That’s real money.”

As WAPA begins its second half century, the people of the U.S. Virgin Islands can be sure that their public utility will continue its ongoing mission of bringing “dependable, reliable, and cost-effective water and power to the citizens of the territory.” Hugo Hodge, Jr., WAPA’s nine-member board of public and private sector members, all of its business partners, and its almost 600 employees will see to that.

WHAT: An autonomous governmental entity that distributes electricity and potable water

Sulzer Turbo Services – Sulzer is the leading independent service provider for all brands of rotating equipment such as turbines, pumps, compressors, generators, and motors. The company serves a number of industries with maintenance and service solutions worldwide, including the Oil and Gas, Chemical Processing, Power Generation, Water, and Pulp and Paper sectors, among others. Sulzer is permanently striving for the best solutions by developing new repair methods and by acquiring businesses that are in adjacent areas. It has acquired companies all around the world to strengthen its leading market position and to enhance its relationship with its customers. – www.sulzer.com

FirstBank – First chartered in 1948, FirstBank was the first Savings & Loan institution established in Puerto Rico. In 2002, FirstBank acquired Chase Manhattan Bank operations in the Virgin Islands, and in 2008, it purchased the Virgin Islands Community Bank, becoming the leading financial institution with the largest Branch and ATM network in the region. Today, FirstBank offers checking and savings accounts, personal loans and credit cards, and mortgage and auto loans to its individual customers. For its commercial clients, FirstBank offers business loans, lines of credit, and real estate financing. Other services include life, property, auto, and commercial insurance, as well as online and mobile banking. www.1firstbank.com/vi/en.

Comprehensive Security Concepts, Inc. – Comprehensive Security Concepts, Inc. (CSC) is a professional security agency with a commitment to quality and individualized service. It has over 45 years of experience in the security arena, and has grown from a modest size into a large security guard agency with tourist-related and large commercial facilities clientele. It has provided security for several major hotel and resorts, government and seaport base facilities. CSC has managerial and field experience in military and civilian law enforcement methodology, procedures, and practices. –rreovan@comprehensivesecurity.org 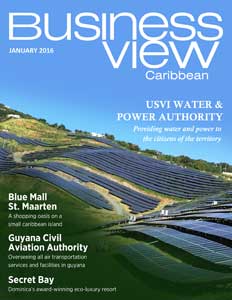