Lobbying for the locals

The Bahamian Contractors’ Association (BCA) is a non-profit, membership organization established in 1958, by a group of Bahamian contractors who realized that collaboration and organization of contractors, as well as the adoption of regulation and good practices, were necessary to protect and promote the advancement of the local construction industry. “It was a time when the union movement was prevalent in every aspect of Bahamian society,” explains Leonard Sands, current Chairman of the BCA. “It was all about the move to see if we could control more of our economy and command our opportunities; whether it was in construction, finance, music – none of that was controlled by the Bahamas at the time; it was all controlled from England.”

“The Country was booming, but the locals were not benefitting,” Sands continues. “So, we had a lot of unions start to try and galvanize support to see if we could get a piece of the pie, as it were. A lot of people came into the country from around the world, so the BCA also had to be there to ensure that the locals had an opportunity to sit at the table, as well. We also recognized that the construction industry is also the voice for the contractor, the realtor, the architect, the designer, the engineer – the allied professionals that make up the construction team that builds anything in the country. So, it played an extremely important voice for the local tradesmen, the local contractors who invested their money to go into this craft, to have the ability to enjoy some of the progress that our nation was having around that time.”

Cooking the pie correctly, after having obtained it, was also on the founders’ minds. “The BCA was that body that came together – artisans and craftsmen who were interested in ensuring that the country be built the right way – learning and sharing experiences and best practices,” Sands says. “It was founded on that principle of promoting best practices in the construction industry because we recognized that as you developed a country, you have to construct it – and you have to construct it right.”

Today, the BCA continues to serve as the representative body for the interests of its members and the construction industry in the Bahamas, in general. As an advocacy group, the Association has been effective in representing the interests of Bahamian contractors in matters regarding international affiliations, trade agreements, foreign competition, and direct foreign investment. It represents the construction industry at Economic Partnership Agreement (EPA) negotiations with the European Union (EU) and at the Coalition of Caribbean Contractors and CARICOM levels.

At home, the BCA acts as an interface between developers and local contractors and maintains a continuing dialogue with the Prime Minister’s Office and the Foreign Investment Board. One of its most important domestic endeavors consists in continually lobbying the government for strong implementation of the recently passed and enacted Construction Contractors Act of 2016, which, for the first time, licenses, regulates, and controls the constructing contracting industry in the Bahamas.

The Act provides for the certification

of Bahamian contractors according to their qualifications and scale/scope of work they are capable of undertaking, placing them on a “level playing field” with foreign contractors, and enabling them to better compete for multi-million dollar contracts on foreign direct investment (FDI) projects that come to the Bahamas, because now their capabilities are certified. The Act also includes provisions giving Bahamian consumers means of redress and protection against shoddy workmanship by so-called “cowboy contractors” – something that has been a frequent complaint among residents.

BCA membership is comprised of some 500 contractors, specialty subcontractors, and industry associates from across the Bahamian archipelago. With some 9,000 contractors in the country, though, Sands admits that the Association still has a lot of work to do. “We recognize that our reach is not successful,” he states. “That’s why I continue to push and push to get them to see the value of membership. We are the sharing portal of information; the government comes to us and tells us about projects and we share that ‘intel’ with our members so that they can prepare for the opportunity. We’re their learning partner; we put on different training courses, monthly, to train our membership to continue to compete at the best level.

“We are the advocate in the Bahamas for all construction in the country; we advocate on behalf of the large contractor when a sizable project is being negotiated with the government and an outside entity. We assist the government to ensure that they remember that there are locals who have invested a lot of money into their companies and can do the work, and they should have an opportunity to bid on large work. So, we advocate, we train, and we create the opportunities by knowing what’s going on in the marketplace.

“It’s our job to educate our membership and the general public that this is why you should join the Association: so you can better your business and continue to thrive,” Sands declares. “We have not done the best job at doing that because our resources are divided, but we know that’s what we have to do. We have seen that our new membership has been increased significantly by contractors who started their businesses less than ten years ago. That’s the biggest number of persons who signed on and became members of the Association. So, the youth in construction is driving the desire to do things better – to be a part of what’s happening in the industry.”

Check out this handpicked feature on Sky Mall in Barbados.

WHO: The Bahamian Contractors’ Association

WHAT: A membership organization representing the construction industry 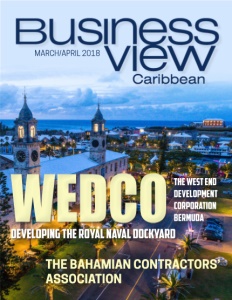