Ready to keep on cruisin’

Who would have guessed, in the mid-1950s, that St. Maarten – boasting only the five-room Seaview Hotel, three-room Passangrahan Royal Inn, and 24-room Little Bay Beach Hotel for accommodation – would evolve into a vacation paradise for millions of cruise passengers every year? Mr. A. C. (Claude) Wathey did. Even back then, he saw the untapped potential of St. Maarten as a tourist mecca and joined with other influential public and private leaders to make it so. Fast forward to 2019: The Port St. Maarten Group of Companies is at the helm, steering a strong and steady course of economic growth and letting visitors know St. Maarten is “ready to keep on cruisin’.”

The country of St. Maarten, represented by the Minister of Tourism and Economic Affairs, is the sole shareholder in the Port St. Maarten Group of Companies. Ton van Kooten, Managing Director of the Group, tells the backstory: “The Companies have been incorporated since the early 1990s, but the first cruise ship was received on St. Maarten in 1964. Imagine, that first cruise had to anchor in the bay, passengers were brought ashore on small boats, and the local population in their private cars showed them the island because there was barely any tourist infrastructure. Out of that was born in the Caribbean, post-Cuba, a bigger tourism industry and, for us, a cruise tour industry.”

As more visits took place, cruise lines showed increased interest in St. Maarten, and the first government-owned company fully directed to cruise tourism was formed. The Group expanded in the late 1990, when the first cruise pier was built. Until then, cruise ships anchored in the bay. In 2009, the second cruise pier was built, and both are still managed by Port St. Maarten Group of Companies, today. The piers can berth six cruise ships; two of the world’s largest, Genesis-class and four ships up to 140,000 tons – beautiful to behold, though quite the logistical challenge.

Port St. Maarten’s other operations include cargo, real estate (the rental of stores on port premises), and yachting. Van Kooten reports, “We have one berth for what we call giga-yachts. Our location at St. Maarten is very close to St. Barts and Anguilla; hot spots where billionaires like to hang out with their yachts. Those vessels are so big that regular marinas can hardly accommodate them, but we can. As for cargo, we’re the sole cargo port for St. Maarten. We own the facilities, we own the mobile cranes to take out the containers from the cargo vessels, and then third parties distribute them inland.” Simpson Bay Lagoon Authority Corporation (SLAC) is mostly known for its yachting marinas and is another part of the Port St. Maarten Group. It manages the two bridges in the lagoon and has advisory roles with government for developments.

Revenue realized by the Port, itself, is evenly split between cargo and cruise, but the cruise industry is much more important to the local economy. The country is 90 percent dependent on tourism, and more than a third of the GDP is generated from cruise and cruise-related business. The Port St. Maarten Group has about 80 direct employees, but those in service are sub-contracted. In total, over 1,000 people on a daily basis find work on Port premises. “Most employees have long tenure,” says van Kooten, “but we are also happy with new recruits, and new talent that we foresee taking over the reins, in due time. From the executive side of the Port, we are very fortunate to have our cargo terminal manager, Mr. Roger Lawrence, and our Business Development Officer and Marketing Manager, Mr. Alexander Gumbs.”

In 2017, the devastating hit from Hurricane Irma took its toll. For St. Maarten and its people, the emotional impact was the worst, though, the effect continues to be felt, economically, as well. The Port, alone, had $13 million in direct damage and business interruption is estimated at $25 million. Nonetheless, Port St. Maarten is about a year ahead in cruise recovery, based on projections. For 2018, the total number of passengers was 1.7 million, and in the latter half of the year, numbers were back up to pre-Irma standards. Thanks, in no small measure, to a great collaborative effort between local stakeholders, the resilience of the St. Maarten people, and the trust and confidence received from all the major cruise lines.

As for current challenges, van Kooten states, “A lot of the shore access is in hands of small operators and they are lagging a bit in recovering their product, based on damages they have from Irma. We also see a bigger desire from visitors to immerse themselves in culture and history, and the private sector here is slowly adapting to those changing tastes. We have to move away from the traditional shopping and beach – those are nice basic elements but you need to offer more. As a resort destination port, we are facilitating the process; making sure that local stakeholders understand what tourists are looking for; not just cruise tourists, it’s the same for stayovers.” To enhance the cultural focus, a new commercial development plan for the Port is being rolled out to create a Central Park for exhibitions of local history, such as artefacts form the early salt mine industry in St. Maarten.

Next on tap: Port facility infrastructure improvements. After two decades, a fresh look is in order, as well as a great deal of maintenance beyond the yearly routine work. Increased volume, closing in on two million people, requires optimizing passenger flow and traffic on port premises, feeding it onto the island. Those items are in the planning phase, now. Technology-wise, the underlying themes are a “smart” and “sustainable” Port. According to van Kooten, “IT Partners, has been instrumental in implementing GLS software – it’s an example of ‘smart’, where we look to further automation of information streams between cargo, cruise lines, port authorities, and local authorities. Capturing that in a Port community system means all those users have a single window to upload their data. That reduces the red tape and gives strong tools and analytical data to the relevant authorities on St. Maarten.”

From a sustainable point of view, the Port is serious about renewable energy sources. “We have some solar but not enough,” says van Kooten. Wind energy is a viable option. We had six smaller turbines that were destroyed during Irma, but we’re now looking to a bigger, 250 kph windmill capable of generating between 0.7 and 1 Mw power per year – about half of our Port’s energy consumption. A big concern is making sure that the blades on the windmill can be lowered during stormy conditions. The one we have our eyes on has a 150-ft. pole that you have to lower them from, and then you can box them in on the floor, to protect them from flying debris. The footings of the windmill have to be very strong, as well. It has to be engineered to withstand the force of waves, for example. Europe has a lot of windmill farms in the North Sea, so, it can be engineered; we just have to make sure we do it the right way.”

The renewed growth of cruising to St. Maarten owes its success to the hard work, support, and vision of many stakeholders on the island. “It’s about government enacting sensible policies; private tour companies delivering the product and experience tourists are looking for; the local Nature Foundation protecting the environment – everybody has critical roles to play,” says van Kooten. “And they do it so well, I would like to commend them. Millennials have become a symbol for changing customer trends and lifestyles. They’re not always looking to buy stuff, outright, they’re looking for experiences that they’ll carry with them for a long time. If you don’t factor in that demand, people will not be happy, your ratings will be low, and you’ll lose your marquis position in the cruise market. So, we make sure, that we facilitate and educate our local stakeholders to connect much more to culture, history, and nature than we do now. And that we keep adapting and reinventing the way the cruise is experienced on St. Maarten.”

Just picture it, cruising into Port, toasting the sunset, and soaking up the true St. Maarten spirit. A cool Margarita moment… Cheers!

What: Services the cruise and cargo industries at Port St. Maarten

IT Partner B.V. is a software development company, founded 20 years ago, offering software products for ports and cruise industry. Since 2009, Port St. Maarten is fully automated by using IT Partner software for port management, container, general cargo and ro-ro operations, dock master/berth planning, cruise and ultra-yacht services as well as billing and invoicing.

Just recently IT Partner signed an agreement with Port St. Maarten for developing a Port Community System (Center PCS). This system is an extension to the port, to enable all parties within the logistics chain of the port, to exchange information easily, safely and efficiently.

IT Partners key product-line is CENTER, a collection of software products that together service terminal, port and cruise operational workflow and management.

CENTER PCS is a cloud-based port community system to exchange information between different parties in the seaport logistics chain.

CENTER CLIENT PORTAL connects to CENTER ERP or your existing TOS, and operates as a portal to the outside world. Your own organization, customers and suppliers have access to the necessary information and operational control.

CENTER APPS is a complete mobile software solution for all your port and cruise logistics activities.

CENTER INTELLIGENCE is a business intelligence solution that enables you to make effective insightful decisions based on facts and real time information.

Letter From The Editor – October-November 2022 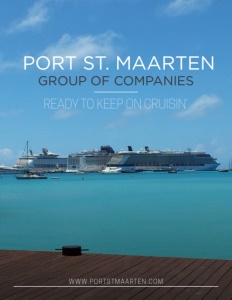