Since the introduction of sugar cane to the Caribbean in the 15th century, rum has been deeply rooted in all the islands, and St. Vincent was no exception. During the 1900s, it was home to a thriving sugar industry and several sugar factories. With rum production as a logical spin-off pursuit, the Mt. Bentinck Estate, located on the windward coast of St. Vincent, built a distillery in the foothills of La Soufriere Volcano – perfect for accessing readily available molasses from the sugar factory, next door. The Mt. Bentinck Distillery, as it became known, operated successfully for nearly 60 years, until 1963 when it was sold to the Government of St. Vincent and became St. Vincent Distillers Limited. Today, St. Vincent Distillers is an award-winning producer of the world’s best rums – made with passion, care, and exceptional taste in distinctive Caribbean style. 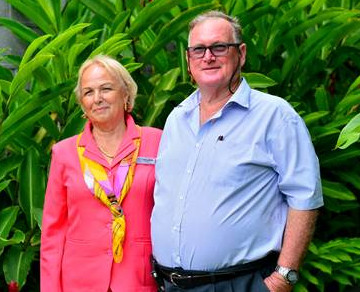 C.K. Greaves & Company, current owners of St. Vincent Distillers, purchased the business from the Government in 1996. Enjoying its second generation of success, family-owned C.K. Greaves & Company also owns three chain supermarkets, a bakery, a wholesale business, and a distribution center on the island. Before the distillery was privatized, rum was produced there solely for the local market. Because St. Vincent and the Grenadines is a 32-island state, with rum the most popular drink, local sales were, and continue to be, brisk.

St. Vincent Distillers’ rum is made on a two-column still and aged in once-used bourbon oak barrels. Rum offerings range from white to aged, and blended products. Locally, the most popular product is Sunset Very Strong Rum, which is 84.5 percent alcohol by volume, and is often blended with other ingredients to produce a distinctive flavour. SLR is a smooth, white rum, bottled at 40 percent alcohol by volume. Captain Bligh XO and Sparrow’s Premium Rum are both aged rums with unique, smooth, palatable flavors to satisfy all the “brown rum” aficionados. Phillippa Greaves, Marketing Manager of St. Vincent Distillers, acknowledges, “The distillers get all the credit here for the distilling and bottling of these fine elixirs, which are sought after by wine connoisseurs, internationally, as a result of the many world rum awards and accolades that our brands have received.”

Between 2001 and 2010, the timing was right to modernize the plant. A complete renovation was undertaken with the replacement of old asbestos roofing; replacement of eight old mild steel vats with stainless steel vats; purchase of a new bottling and labelling machine (previously, labels were put on bottles by hand); purchase of a new large Cochrane boiler; two new water treatment plants; construction of two molasses storage tanks (in Kingstown and at the Georgetown distillery); construction of a generator shed; and purchase of a new spirit head and one new, stainless steel condenser – just to name a few!

“We did a massive overhaul over a nine-year period that proved very successful,” Greaves reports. “Also around that time, we improved our labelling and increased awareness of our local produced brands of rum. We commenced expo ventures and started exporting and marketing more aggressively. As a result, the success of our rums has been tremendous. They are continuously winning gold medal awards, regionally and internationally; particularly, our Captain Bligh XO aged rum – having won the prestigious award of World’s Best Rum 2014 in London at the World Rum Awards in the U.K.”

In 10 years, St. Vincent Distillers progressed from a small distillery producing rum solely for the local market, to an internationally recognized producer and exporter. All brands are now exported to the U.S., U.K., Germany, BVI, Trinidad, Barbados, Antigua, and Australia. The biggest challenge, right now, is obtaining molasses. Most of the Caribbean islands no longer grow sugar (the base for making rum), so the OECS distilleries have to import molasses from further afield, like Mexico. Even Guyana, one of the last large Caribbean islands to produce sugar on a big scale, has recently shut down three factories. “That’s why we no longer get sugar from them,” says Greaves. “So, it’s a huge concern. Rum, of course, sells, so that isn’t a worry. It’s definitely the drink of choice now, globally. But looking further ahead, we have to be innovative if we’re going to continue to get molasses. Places like India, Fiji, Mexico still grow sugar, so once we can get a broker to buy it on the world-wide market, it shouldn’t be a problem.” 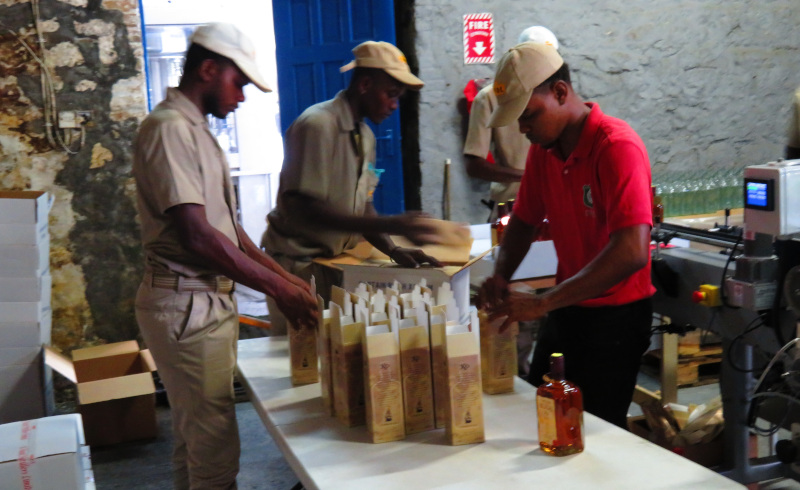 Imports of molasses now arrive by ship in Kingstown, where they’re pumped into the St. Vincent Distillers storage tank. A company-owned tanker then transports it to the distillery plant in Georgetown. The drive takes about an hour, and the tanker will do up to three trips a day. According to Greaves, “We normally produce about 66,000 cases per year – that’s 800,000 bottles, mostly for local consumption. The demand for local rum is high, so we don’t export large numbers. We’re the sole rum distillery on the island – and all the Caribbean islands are known for their rum – so what makes us unique? One contributing factor is that our Sunset Strong rum is 84.5 percent alcohol per volume, and actually won the title of World’s Best Over-Proof Rum at the World Rum Awards in London. Also unique is our location at the foothills of La Soufriere volcano, where there is a ready supply of fresh spring water. We can see the volcano summit from our windows, that’s how close we are. There are great benefits to volcanic filtered water; this is an integral component to the taste of our product.”

Rum is deeply routed in the Caribbean culture, and while each island has its own distillery, Greaves notes, “The Caribbean rum producers are really all one family. We are all members of the West Indies Rum & Spirits Association (WIRSPA). It’s the voice of the Caribbean rum industry and is instrumental in putting Caribbean rum on the world map, thus ensuring the continuation of rum production in the region.” St. Vincent Distillers employs a dedicated staff of 31 people who are vital to the success of the business. The still, itself, is a 24-hour operation, consisting of three shifts, Monday to Saturday. The entire distillery is at one location, consisting of seven separate buildings: an office building; a bottling plant; a still; a rum barn; two aging barns (where barrels are held to age); and a storeroom. The distillery works closely with three components in the Government: the Tourism Authority, the Hotel and Tourism Authority, and the Ministry of Trade.

“Of course, rum and tourism has been a long-standing combination,” says Greaves. “Everyone comes to the Caribbean for the rum and the sun. So, rum is going to be a large part of that economic growth. Our tourism product in the country is increasing; there is new hotel development planned, with a number of hotels already in the pipeline. St. Vincent and the Grenadines economy, in the past, was largely based on agriculture, namely bananas. But that is no longer the case, so the current government is now laying down the necessary infrastructure to carry the country forward; one of those was our Argyle International Airport – a welcome sight – and of course, the development of the tourism sector. Already, our distillery offers rum tours and they are proving extremely successful.”

Being a rather small distillery, St. Vincent Distillers contracts local distribution out to a single distributor, Coreas Distribution Limited, a special relationship that has lasted almost four decades. Greaves reflects, “This partnership has proved monumental in the successful circulation of our brands, so the distillery can focus on what it does best – making rum – while leaving the distribution to the experts. We hold them very close to us. For the last five years, our bottles and lids have come from Allied Glass in England. They are one of our major suppliers; as such we have a constant supply of empty bottles coming across the sea. They are an integral part of our operation.”

Topping the agenda for the future are plans for upgrading the still with the construction of a new column to increase production. Also planned is a third aging barn, possibly launching a new brand of rum, and, perhaps, a different type of alcohol beverage. Greaves has her own positive outlook, stating, “I think the rum industry will continue to thrive. With the forging forward of tourism, agriculture, and manufacturing, economic growth on St. Vincent is inevitable. Rum sells and I have no doubt that we will keep on producing, successfully. Even though we are a small distillery we make quality products and we are very careful with our distillation and fermentation. Whenever we put our rums into taste test competitions, regionally and internationally, they are constantly getting Gold awards because of the exceptional taste – and we all share in the pride for that.”

We would like to take this opportunity to congratulate the St Vincent Distillery and Captain Bligh on their gold medal winning achievement.

They continue to produce some of the finest rum in the world!