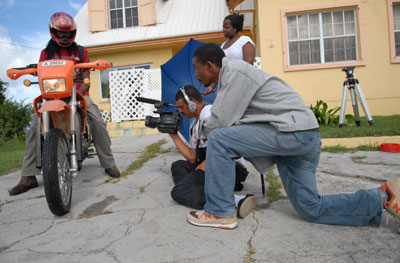 The Antigua and Barbuda filmmaking team of Howard and Mitzi Allen has received the LIVE UP: Loyalty and Support Award for their work to help reduce stigma and discrimination for people living with HIV/AIDS across the Caribbean.

The couple, who lead HAMAFilms, a film and television production company, were in Barbados to celebrate the tenth anniversary of Regional Testing Day (RTD). RTD has been organized by LIVE UP: Caribbean Media Alliance for the last ten years, with the support of strategic partners Scotiabank, PANCAP, ministries and departments of health and national AIDS programs (NAPs).

Mitzi Allen accepted the award on behalf of the company at the ceremony held May 26, 2017. Mitzi, who also hosted of LIVE UP: The Show for five years said they were very honored to receive the award, as it was given to the people who work behind the scenes of RTD. TV Antilles, AcuteVision along with HAMA received loyalty awards.

Since the inception of the media alliance HIV/AIDS campaign, HAMA has been involved in the training of over 30 young media professionals from across the Caribbean region to produce and deliver news reports and public service announcements (PSAs) about HIV.

Howard Allen said they have seen a drastic change in how stories on HIV/AIDS are told. “When we began, the general storyline showed people with HIV and AIDS as victims. Our role was to teach these young journalists and producers new and creative ways to capture images and deliver content in a way that the person is seen in a more humane way and not as a victim. It was also important that they reach young people with social messages, which were also entertaining. Initially it was very difficult to get someone to say they have HIV; now you can find people who will come on camera and share their story,” the film director noted.

Dr. Allyson Leacock, Director of the LIVE UP: Caribbean Media Alliance said at the ceremony, “Howard and Mitzi Allen are an unassuming husband and wife team that works quietly but their work shouts loudly about their depth and professionalism. Their commitment to LIVE UP has been evident from the start and they are part of that impressive Antigua Team. We are happy they could be here for us to thank them for their decade of loyalty and support.”

Back in 2011, HAMA Productions won a Kaiser Family Foundation grant, which allowed them to produce a 13-part drama series Paradise View, which included characters living with HIV. Howard and Mitzi both agree that media professionals must put aside their own perceptions of what a person with HIV looks like and how they contracted the virus, move beyond cultural biases and be informed in order to tell stories with compassion.