A generous slice of heaven facing west onto the azure Caribbean Sea, Blue Waters Resort is one of the oldest and most endearing destinations on the island of Antigua. First-class service, freshwater pools, secluded beach coves, and stunning tropical gardens are but a few of the hallmarks epitomizing luxury living at its best. Blue Waters Resort & Spa is ideally located at Soldiers Bay, St. John’s, on the northwest tip of Antigua – a mere four miles from the airport and a short 15-20 minute transfer to the hotel. 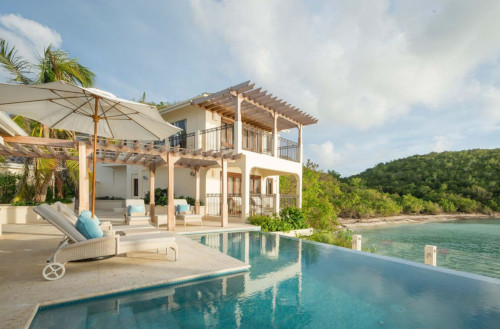 Gary Randall is Blue Waters Resort & Spa’s CEO and a proud, second-generation operator of this delightful, family-owned getaway. “My father bought the property in 1984, it was a much smaller hotel then,” Randall recounts. “He was very successful; quite young in the food business back in the U.K., and came here on holiday. On his second visit, he started to negotiate with the owner to buy it. The chap who owned it at that time, Osmond Kelsick, was given the site for his services as the only Antiguan squadron leader in the RAF during World War II – on the proviso that he build some hotel rooms. When my father purchased the property in 1984, there were 45 rooms and one restaurant.”

Over the years, Blue Waters Resort & Spa has evolved dramatically. Today’s incarnation includes 117 rooms arrayed throughout the site in three villas; four, three-bedroom penthouses; 24 junior suites; and oceanfront and beachfront rooms – along with four outstanding restaurants. Randall describes the catalyst that spurred the change. “The big shift happened in 1995, after Hurricane Hugo came along and did a lot of damage to the hotel facilities. There was a large-scale rebuild of what is now the lobby reception – what we call the central area – where our main restaurant, Bartley’s, was constructed as one of the few air-conditioned, fine dining establishments on the island. Also in 1995/96, we refurbished our Deluxe and Superior rooms.”

In the last seven to eight years, the hotel has been extended and the number of facilities increased. A great deal of reinvesting has resulted in the modernization of the décor and upgrading amenities, such as lighting, sound system, soft furnishings – and a new outdoor restaurant and a kids club have been added.

“We’re 117 rooms – that’s 107 keys – on a very large site of 20 acres with beautiful extensive gardens throughout the property,” says Randall. “That’s something we’re known for. It’s not dense as a hotel complex, it’s actually quite spread out. In fact, a lot of people that stay here often feel like they’re staying in a smaller hotel, because it’s never particularly crowded. We have 11 swimming pools and four restaurants (Bartley’s, the Cove Restaurant, the Pelican Bar, the Palm Restaurant, and Carolyn’s on the beach for lighter ‘salad’ fare). That’s quite excessive and unique for 107 keys. Our beaches are not the biggest, but they are pristine and perfect, and we have three of them.”

Previously marketed primarily to U.K. tourists, Blue Waters Resort & Spa has significantly shifted focus in the last 24 months to increase the percentage of U.S. business. Finding the right marketing partner, Karen Bull, has contributed to Blue Waters’ success through representation stateside. Randall strongly believes that the American market responds well to a property with modern specifications. He notes, “We’ve done that. I think we used to be too ‘Englishy’ – a little bit too ‘twee’ and Colonial. Now, we’ve become more appealing in the way we look, as well as the variety and quality of our menu offerings. We’ve gone away from the English-influenced heavier food to lighter, fresher, healthier – salads, fresh fruit, fish.”

No worries for guests who want online accessibility on vacation, Wi-Fi is available throughout the property. The resort runs at 75 to 77 percent year-round occupancy, keeping the staff of 240 employees extremely busy through the high season. Of course, the threat and unpredictability of hurricanes is always hovering. But, historically, Antigua and Blue Waters Resort & Spa have been fortunate to evade direct hits for the most part. Last year, Hurricane Irma skirted past, leaving about $300,000 U.S. in damage to the hotel. They were already closing to refurbish the main reception and bar, at the time, and had to extend that for an extra two weeks. Now, severe storms are factored in when it comes to building materials, tools, and construction methods, to try to protect the resort as much as possible for that eventuality.

As for competing for tourist dollars with other resorts on the island, Randall says, “Because the hotel has been around for 50 years, and we’ve owned it for 34, one of the things we’re best known for is that we’ve retained a lot of our staff for a long period of time. Much of our business is repeat guests; they come here and know many of the staff, so there’s an experience of friendliness and familiarity that other places don’t have. It definitely makes us unique. Besides that, Blue Waters Resort & Spa is just a magical location – where it’s situated and the large variety of dining options in relation to the scale of the property.”

According to Trip Advisor reviews, “It’s a very beautiful property” is one of the most repeated guest comments. Indeed, the grounds are wonderfully mature, and a great deal of ongoing effort and expense is put into maintaining the local flora and fauna, as well as the buildings. The site, itself, is within a secluded bay area with a steep hillside behind, making it a private sanctuary for visitors. For those seeking a more active lifestyle, there are water sports, including paddle boards, Hobie-Cat and Kayaks; a flood-lit tennis court; morning yoga classes in a dedicated pavilion; live entertainment, including a steel band during Sunday brunch and the weekly Manager’s Cocktail Party; and Antigua’s only championship golf course is a quick, five-minute drive away. Or take a 15-minute drive to the capital where a wonderful selection of stores, boutiques, and duty-free shopping awaits. 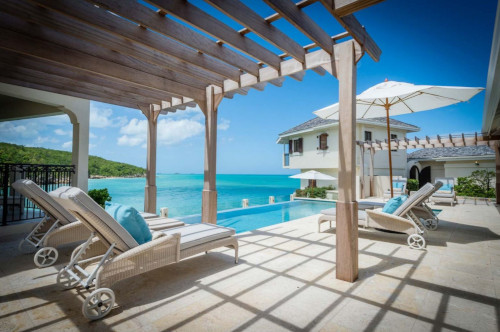 Environmental sustainability came into play during the revamp of the facilities and is important to future growth. “We’ve been trying to use as much low energy equipment as we can,” says Randall. “That’s one of the main things. Something else we’re pursuing at the moment – and it’s not easy to implement because it’s a complicated project – is to stop supplying water in plastic bottles for guests. We would be giving them water in glass bottles when they arrive, that they can then fill up themselves.”

In another “green” effort, Blue Waters Resort & Spa is no longer supplying straws with drinks. If requested, they are available – made from PLA, a biodegradable thermoplastic that comes from corn starch, a natural bioactive alternative to traditional plastic straws. To control the spread of mosquitoes, a treatment program called “fogging” (because of the smoke it creates) is normally done on a weekly basis. The process is not harmful and quickly dissipates; even the beautiful butterflies are not affected.

Looking ahead, Randall shares some ambitious plans. “We have some land and we’re debating whether to potentially add some high-end villa components to the property to sell as timeshares. That’s high on the agenda. People would have complete flexibility as to when they wanted to rent them out, but we would manage the rentals through our operation. We are also focused on expanding our share of the American tourist market here, as well as implementing more sustainable initiatives on the property in the future.”

Over the years, Blue Waters Resort & Spa has won multiple awards, including the World Travel Award for the Leading Hotel in Antigua & Barbuda, six years in a row, and Queen’s Diamond Jubilee Award for contribution to the island. With such a gorgeous landscape, friendly staff, and impeccable attention to every whim, it’s no surprise that second and third generation family members are coming back as guests and new visitors can’t wait to return to this Antigua paradise.

Check out this handpicked feature on Harney Motors Ltd. – Antigua. 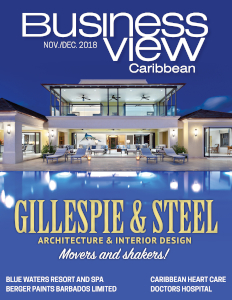 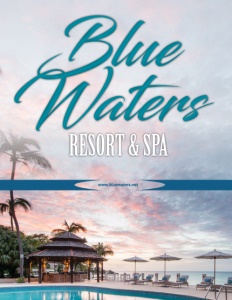