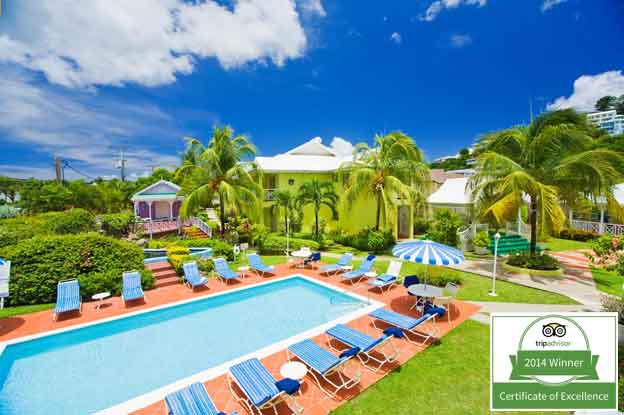 For the perfect vacation in paradise

St. Lucia is a small island nation in the Eastern Caribbean. Today, the country, part of the British Commonwealth, is a world-renowned tourist destination, known for its quiet, volcanic beaches, quaint fishing villages and the majestic Piton Mountains. For many years, though, St. Lucia had been a mostly agricultural-based society, exporting bananas to the United Kingdom and Europe. However, due to competition from lower-cost Latin American banana producers and reduced European Union trade preferences, the industry began to decline.

It was under this set of circumstances, in the early 1990s, that two former school teachers, Joyce and Desmond Destang, consolidated their earnings from a fabric store and several residential and commercial real estate interests, and bought a property in Rodney Bay, on the northern end of the island. At the time, there was not a lot of activity there and only a few hotels. But the couple decided that since tourism to the island was beginning to increase, the timing was right to get into the business. So, in 1994, they founded the original 45-room, Bay Gardens Hotel. The couple entrusted the operations of the property to another dynamic couple, Berthia and Johnny Parle, industry veterans and long time family friends who were hired as the General Manager and Food and Beverage Manager, respectively.
Over the years, the Hotel expanded to 87 rooms and won several local, regional and international awards. Its mercurial General Manager was Berthia Parle, one of the most recognizable figures in Caribbean hospitality, who, during this time also became the first female President of the Caribbean Hotel and Tourism Association.

In 2002, the Destangs acquired the property next door – a small establishment called the Palm Tree Hotel – which had gone into receivership. They rechristened their new purchase, the Bay Gardens Inn, and added another 33 rooms to their portfolio. The owners hired Ms. Waltrude Patrick, an experienced manager, who was also an old family friend, to run the property, and the new hotel’s success was quickly assured. In 2006, the Bay Gardens Inn was awarded Best Small Hotel in the Caribbean by Virgin Holidays, the U.K-based, transatlantic tour operator, at its annual World Travel Awards ceremony.

The final addition to the Bay Gardens hotel chain was the addition of the Bay Gardens Resort and Spa, which the Destangs built and opened in 2007, on property they acquired in 1999, on Reduit Beach in the Gros Islet part of the island. The Destangs called on Berthia Parle to captain the ship at the Resort and shortly thereafter, Waltrude’s duties were expanded to include management of both the Bay Gardens Hotel & Inn, when Berthia moved to the Beach Resort. With the establishment of this four-star hotel, and its 72 luxury rooms, the Bay Gardens group was complete.

Sanovnik Destang, the son of Joyce and Desmond, is the Executive Director of the three establishments. He explains why the creation of the Beach Resort and Spa was important to the Destangs: “The Bay Gardens Hotel and Inn had always done well in terms of occupancy – in the 70 and 80 percent range; the one disadvantage we had, was we were not on the beach. That limited what you could do, what you could offer, and how much you could charge. The Beach Resort helped us get into the four-star market. We always said we provide four-star service but we charge three-star prices. At least now we were able to offer that four-star service and actually charge, at least for that property, four-star prices.”
Sanovnik had returned to St. Lucia and the family business in 2008, after working as a Chartered Accountant and financial consultant at KPMG in Toronto, Canada. The Great Recession was just beginning to wreak havoc on the tourist industry throughout the Caribbean, and for the first few years, the new Resort lost money. But under Savovnik’s leadership the hotel group was able to return to profitability using a combination of innovative online marketing methods and its policy of targeting specific groups of guests.

He explains: “When I came back into the business in 2008, one of the things I was charged with looking at was the marketing budget. I’m an accounting person, by profession. And the change we made, almost immediately, was to go away from the traditional print advertising and go more towards online marketing and social media. We have 44,000 fans on Facebook, we’re on Instagram, we’re on YouTube, we’re everywhere. And we use that as a key part of our marketing strategy – Google, Yahoo, Pinterest, Instagram and Tripadvisor. We are able to cast a wide net, but we’re also able to geo-target and zero in the markets that matter most to us. So we do a lot of targeted advertising to the demographic that we think is most appropriate for our property.

“We are particularly good at capturing the Caribbean market. We believe that regardless of where you’re from, and how you look, and how much money someone might think you have, when you come here on a vacation, you’ve saved up your money and you deserve the best service. And we provided that level of service and deliberately targeted that underserved market – the Caribbean Diaspora, African-Americans, people who felt, sometimes, that they were not necessarily treated as well as guests from North America and Europe, and so on. The vast majority of arrivals from the Caribbean choose us over any other hotel.

Sanovnik’s methods have paid off handsomely: “What has really improved over the last few years are the rates that we are able to attract because of our marketing strategy and the improvements that we continuously make to the property.” In 2013, the property group won an award for Marketing Excellence from the St. Lucia Chamber of Commerce. In 2014, Bay Gardens Limited was named Business of the Year by the Chamber and its Managing Director, Joyce Destang was named Entrepreneur of the Year. In 2015 it snatched the Business of the Year Award for an unprecedented second time, while also regaining the Marketing Excellence Award for the second time in three years. To cap off an incredible year of awards for the Group Sanovnik was recognized as the winner of the 2014 Caribbean Hotel & Resort Investment Summit (CHRIS) Rising Star Award by the International Society of Hospitality Consultants (ISHC). “We’re pretty much the premier locally-owned hotel on the island,” admits Sanovnik, proudly.

But the Bay Gardens group is not content to sit on its laurels. The properties are constantly being upgraded. Recently, the company spent millions of dollars updating the Inn’s rooms, bathrooms, lobby and furnishings. The Hotel added video conferencing facilities – the first on St. Lucia. At the Resort, the spa was upgraded, and a new beach bar – Seagrapes – was opened. In addition, by this coming August, a brand new water park, Splash Island Water Park Saint Lucia, the first open water park in the Caribbean, will be complete.

The water park was conceptualized and will be operated by Sanonvik’s wife Julianna Ward-Destang, a Bay Gardens Director who, like Sanovnik, is a Chartered Accountant by profession. “It will put us in a different category, altogether,” says Sanovnik, “because there’s no resort in the Caribbean that has something like this. It will help us attract more people from the family market and has captured the imagination of corporate groups and adventure-seeking adults of all ages.”

Sanovnik, who also serves as the St. Lucia Hotel and Tourism Association’s (SLHTA’s) 1st Vice President, wants to see all three properties continue to grow and expand, which will create more employment opportunities for St. Lucians, while offering more amenities for their guests. For example, he’d like to upgrade both the Inn and Hotel to three and a half stars and see them continue to be the premier choices for the business, corporate, and conference markets, as well as for budget conscious, leisure travelers. Regarding the Beach Resort, he says, “We have the capacity and ability and the desire to expand the property.” With some empty land available, he hopes to double the size of the Resort to 150 rooms and add additional restaurants, as well.
For the Destangs of St. Lucia, as well as for their guests, the future looks bright: “We’re definitely going to be the most modern place, along with the best service and the best food – all of those different experiences that people are used to from Bay Gardens.”