Business View Caribbean interviews Ronald Jackson, Executive Director of CDEMA, as part of our focus on best practices in the Caribbean region.

The Caribbean Disaster Emergency Management Agency (CDEMA) is a regional inter-governmental agency for disaster management in the Caribbean Community (CARICOM). “CDEMA was an institution that came out of an initial project called the Pan Caribbean Project for Disaster Preparedness and Prevention,” explains Ronald Jackson, CDEMA’s Executive Director. “And that project came about after the experiences of the 1970s and 1980s disasters that affected the region. There needed to be some focus on the issues related to promoting prevention, reducing exposure to disasters, and strengthening capacity to respond. The project was quite successful, and there was a view that there needed to be some sustaining of the good outcomes of the project, moving beyond a project format and into some institutionalization of its key planks, moving forward. In that regard, what was envisioned, then, was a CARICOM institution that was supposed to focus on driving an agenda for disaster loss reduction, looking at reducing vulnerability of the housing sector, critical infrastructure and tourism. The Agency was also required to change the way people dealt with risk, in addition to dealing with response requirements of the member states.”

CDEMA’s precursor was created in 1991 as CDERA – the Caribbean Disaster Emergency Response Agency – with the primary responsibility for providing coordinated emergency response support and relief efforts to participating states that require such assistance. “Unfortunately, when CDERA was created, its mandate, at the time, focused on only one half of the broader outcome of Pan Caribbean Project for Disaster Preparedness and Prevention,” Jackson continues, “which was the half that looked at mobilizing and coordinating disaster relief support, mitigating and eliminating the consequences of disasters in participating states, coordinating relief to an affected member country of CARICOM, and also providing information to any partner, be it interested governments, organizations, or stakeholders on what was happening in the affected member countries.

“But through lessons learned, through experiences, through the initiatives of the team, then, and working with the broader stakeholder community, the agency promoted, by 2001, the first comprehensive agenda that looked at tackling disaster issues, including the recognition of climate change as a crosscutting issue, and advancing and linking that particular agenda to the efforts towards sustainable development within the Caribbean. That ushered in an era of the transformation of the agency by 2009, into what the original intent was, which was a more comprehensive disaster management organization that was not only focused on driving disaster response operations and capacity building and information, but also developing tools, products, regional public goods, and the advocacy towards a disaster loss reduction and mitigation agenda within CARICOM member states. Hence, by 2009, the agency was renamed CDEMA with the ‘M’ replacing the ‘R’ to represent the broader agenda of managing risk. And this was consistent with the agenda that the agency was promoting within the context of the Comprehensive Disaster Management Strategy of 2001.”

As reorganized, CDEMA refocused its attention on Comprehensive Disaster Management (CDM). “When CARICOM created CDEMA, it looked at the context which existed then – fragile economies and ecosystems in extremely vulnerable condition, and it sought to unlock the potential for regional integration movement and, in particular, functional cooperation in CARICOM in relation to disaster management,” Jackson says. CDM, then, is an integrated and proactive approach to disaster management that seeks to reduce the risk and loss associated with natural and technological hazards and the effects of climate change to enhance regional, sustainable development. The agency focuses on all phases of the disaster management cycle, involving all sectors of the society, and concentrating on all hazards. 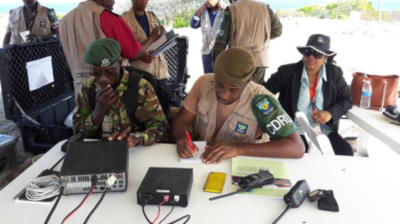 When a disaster strikes, a participating state may request assistance as long as the state determines that control of the situation is beyond its national capability. This includes disasters resulting from natural hazards such as hurricanes, floods, earthquakes, and volcanic eruptions, as well as man-made disasters such as oil spills, chemical accidents, aircraft crashes, and industrial fires.

Upon receipt of the request for assistance, CDEMA is responsible for soliciting and coordinating assistance from governments, organizations, and individuals both within and outside the region, who can provide the specific resources or expertise most urgently needed. Other participating states can play an important role in this regard as, in many cases, they are well placed to provide assistance because of their similarities, close proximity, and close ties. Types of assistance provided or coordinated by CDEMA in the past have included: relief supplies, emergency communications facilities, emergency management personnel, damage assessment personnel, search and rescue personnel, rapid needs assessment and financial assistance.

In addition, other functions of CDEMA include:

CDEMA is funded by its members under a formula which takes note of the population size and economic conditions of each constituent state. Additional funds are secured from various development banks, foundations, and organizations, such as the European Union and the U.S. Agency for International Development (AID), as well as governmental affairs offices of countries such as Canada, the UK, Austria, and Brazil, among others. Jackson says that the agency’s goal is to raise approximately $30 – $40 million (US) for the next three years of its operations.

CDEMA has a staff complement of about 21 direct employees, with the ability to extend that number on a per-project basis. “But, we are not up to that capacity at the moment,” Jackson laments. “We’ve been challenged by the constancy of our member states to honor their obligations. So, we’ve been functioning, in the best of times, somewhere between 80 and 85 percent in terms of the annual collection rate of our core contributors, and that has impacted the staffing of all positions, at the moment, and we operate somewhere between 18 and 20 of that 21.”

Originally, in order to be a member of CDEMA, a country had to be a member of CARICOM. “But that was transcended by the opportunities presented to other countries to seek what is called associate membership with CARICOM and that is the situation we have with the British Overseas Territories,” Jackson says. “So, we have 14 full members of CARICOM and four out of the six British Overseas Territories, with the Cayman Islands and Bermuda still not being members of CDEMA. We recently had discussions with the Dutch around joining the organization specifically St. Maarten, and we have been in dialogue with the French territories, which are not independent, regarding establishing a cooperation agreement. These efforts are designed to fully realize and express the potential benefits of having a wider, regional system.

“What we say to them is: ‘Look, there are economies of scale, there are regional public goods and services that you can benefit from, including more strategic application of resources towards your own interests; leveraging the negotiation space for funding from the development community in a better way; and pulling resources from other members to support your needs, not just in disaster time, but also in “blue-sky” times, where you may have human resources or specialization challenges.’ 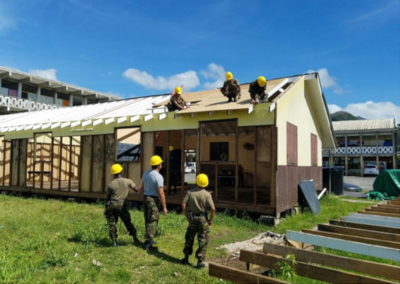 “But also, we share with them the potential for them to contribute to the countries within the pool with their own capabilities and skill sets. The beauty of the CDEMA system is that it advances the capacity of member states by identifying what is good in any particular state and taking that, sharing it with the other members, and supporting the replication of those best practices in other countries. So, it does provide some opportunities for countries to be acknowledged and to be affirmed as leaders in specific areas and to contribute to the development of others, but also to benefit from other resources. That’s the message we carry. We’re not sure why it has taken so long for other countries to come onboard. I know that one of the concerns that everyone always puts on the table is you have to pay a subscription. But, I think any system that is useful requires resources for it to run. And if you have more members, then the cost of operation, per member, becomes even less burdensome.”

“Historically, we’ve been able to provide a real return on investments by member states, without even taking into account disaster response support. We were operating at a minimum of a one-to-one, to a four-to-one, return on contributions by member states in the best of times. This is real financial returns and does not include the cost of the human resources that are also employed in providing services. So, if I were to add the human resource, technical assistance support that the members states have called on, and we provided, and we would then layer on top of that the value from our responding to these events, it would be tremendously higher, and it’s something we’re going to be working to better illustrate to member and non-member states.

Going forward, Jackson believes that CDEMA’s mission is more relevant today than when it was first established, because of the potential dangers posed by climate change. “I think the challenges facing the region from the changing climate, or the climate’s variability, present a real threat to the security of the citizens of the region, which will result in more humanitarian consequences,” he declares. “And this is where CDEMA, in terms of its ability to harness the region’s capacity and respond to the needs of member states is really illuminated, and that presents great opportunities for the region in advancing the agenda for resilience. CDEMA was the first institution that put this conversation on the table in 2001 and focused on it from a strategic point of view. That agenda, which is now becoming so central in the discourse, still remains a fundamental agenda for CDEMA and so, I think, the future presents a lot of opportunities for the regional system, in that regard.

“In its creation, it was innovative, the first of its kind. It is a system that was designed by the region’s people, for the region’s people, and operated by the region’s people, which is unique in that is has a cultural sensitivity to the Caribbean region. It has been at the forefront of the discourse on resilience and promoting a strategic roadmap for achieving integrated risk resilience with the region’s countries for the attainment of sustainable development. The situation now faced by the Caribbean, under the agenda of climate change, makes the agency an even more relevant institution. However, these emerging opportunities will only be realized in as much as the region, itself, is willing to really invest in the ability of the institution to fully optimize the opportunities that will be presenting themselves over the next several years.”

AT A GLANCE
WHO: The Caribbean Disaster Emergency Management Agency
WHAT: A regional agency of CARICOM
WHERE: Headquarters in St Michael, Barbados
WEBSITE: www.cdema.org 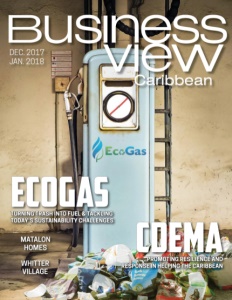