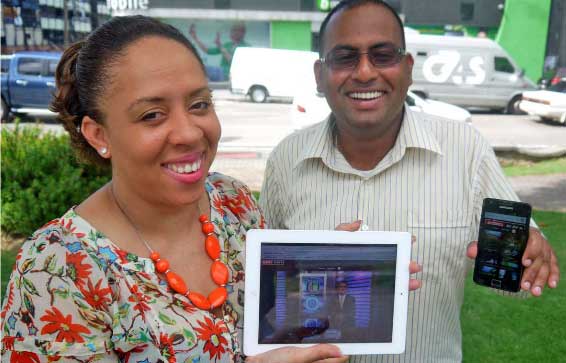 Trinidad and Tobago has had telephone service since 1883. The early system consisted of local, battery-operated phones connected to a magneto switchboard. By the early 1900s, the government owned all the phone the lines in the islands’ rural areas and by 1936, there were approximately 6,300 lines in service throughout the country. In 1949 the first teleprinter link was established. The British-owned Trinidad Consolidated Telephones Limited spurred the growth of the phone network from the mid 1930s until 1960, when the Government purchased it and the new company became the state-owned Trinidad and Tobago Telephone Service, or TELCO.

In 1969, The Trinidad and Tobago External Telecommunications Company Limited (TEXTEL), was incorporated as a limited liability company – a joint venture participation, with the Government of Trinidad and Tobago holding 51 percent of the share capital and Cable and Wireless (West Indies) Limited, the other 49 percent. TEXTEL was charged with the responsibility of providing and maintaining telephone links, including transmission, switching, and signaling facilities, between the country and the rest of the world.

Over the years, the country’s phone system expanded with major development programs taking place during the mid-1980s. In 1991, there was a merger between TELCO, which provided local telephone services and TEXTEL, which provided international communication. The result was the Telecommunications Services of Trinidad and Tobago (TSTT) Limited, which, today is jointly owned by National Enterprises Limited (NEL) – which in turn is majority owned by the Government of Trinidad and Tobago – and Cable and Wireless (West Indies) Limited.

(National Enterprises Limited is an investment holding company that was formed to consolidate the Government’s shareholding in select state enterprises and in industries that drive the country’s economy, including natural gas and energy-based manufacturing, telecommunications, and the marketing and manufacturing of food basics.)

Ronald Walcott, TSTT’s Chief Executive Officer, describes his company’s offerings: “We provide a suite of services and solutions including land line services, internet services, mobile services, TV services, security services, and ‘enterprise’ services.” (Enterprise solutions include maintaining the operation of part or all of a client’s communications infrastructure, such as networks, mainframes, PBX systems, security, data transportation and storage.) TSTT has 2,400 employees in more than fifteen island locations. Its customers include key industry leaders in the finance, energy, government, manufacturing, education, healthcare, and tourism sectors. It also serves all of the country’s residential consumers.

TSTT deploys both wireless and fiber optic networks to deliver voice, data, and multimedia capabilities. Its leading-edge products are designed around its IP-based core infrastructure and marketed under its BLINK and Bmobile brands. In addition to fixed line and mobile communications, the company has an innovative line of Android-based devices; iPhones; broadband access including best-in-class LTE and HSPA+ 4G technologies; Metro Ethernet; TelePresence and Video Conferencing; subscription-based IPTV; and business and home alarm monitoring services.

While TSTT is responsible for all land-line operations, because the government still considers it an “essential service,” the company does have competition from other private players in the mobile, internet, and TV sectors. “What differentiates us,” says Walcott, “is that we are still the only one that provides a whole suite of services to our customers. You can come to us and get a bundle of products at a good price for residential, mobile, and even enterprise for your business.”

Walcott goes on to describe how TSTT’s operations are similar to the data revolution that is going on worldwide: “You could look at the U.S. and we would be a microcosm of the same thing, where everyone is working to where data can support everything – TV, entertainment, broadband, voice, etc. So, it’s really a question of how you bundle it and how you package it and how you price it.
“We have spent over $1 billion USD over the last six years in upgrading our access and networks and we will continue to invest significantly to remain relevant and leading-edge,” he continues. “We have pioneered and innovated a number of technology solutions in Trinidad and Tobago, which is a proud legacy that we have. We have rolled out LTE wireless – nobody else has that in Trinidad, and we’re expanding that network, right now. We’ve gotten into mobile financial services so we have partnered with VISA and the biggest bank on the island. We are also continuing to roll out fiber; we have the largest fiber network in Trinidad and Tobago.”

As TSTT continues to innovate and expand, Walcott has a vision for the future of his company in a country where current broadband penetration is still less than 50 percent. “I want to be able to provide broadband service for everybody in Trinidad and Tobago – that’s my vision. I would like that every single household in the country has a broadband connection and is actively using it – broadband access for all that’s affordable. Because then, we can layer on top of that a whole new suite of powerful services that do not exist, today, and move away from the traditional voice and messaging services that are on the decline, globally.” In pursuit of that vision, Walcott asserts that the government also considers both expanding IT infrastructure and providing broadband for all, important goals. “It’s a key pillar that the government has,” he says.

In addition to being the island’s only telecom company providing a full suite of communication products and services, Walcott says, “We are also an organization that takes our corporate, social responsibility very, very seriously, as we invest significantly in giving back to Trinidad and Tobago; it’s one of the things that we are very proud of.” TSTT staff volunteers at many local charities and community events, and the company often donates computers and other equipment to various organizations. One of the recent programs of TSTT’s Blink/Bmobile Foundation made it possible for 70 island youngsters, ranging from 3-15 years, to attend “Camp Latino…¡Olé!” an interactive, holistic exposure to Latin culture. It also supports the local schools’ A.R.R.O.W Program, for the improvement of literacy and communication skills.

WHO: Telecommunications Services of T&T (TSTT)
WHAT: The country’s largest provider of communications solutions to the residential and commercial markets
WHERE: Headquarters in Port of Spain, Trinidad
WEBSITE: www.tstt.co.tt

Allied Security Limited – Allied Security is a Trinidad and Tobago based privately-owned security and risk management company, offering comprehensive advice on every aspect of security – from corporate operations, commercial risk, and foreign investment to counter-terrorism, close protection, and support to governments. The company is a registered UN contractor and a major provider to the various government agencies throughout the Caribbean. – www.alliedsecurityglobal.com

Amalgamated Security Services Limited (ASSL) – With more than 30 years of experience, 3,500 employees, and unrivalled customer satisfaction ratings, Amalgamated Security Services Limited is the provider of security services throughout Trinidad and Tobago with thirteen (13) operational bases in the country and operations in Barbados, Grenada, St. Lucia, Guyana, and Antigua, with a reach to various other Caribbean islands. – www.assl.com

Cell Master Limited – Cellmaster Group offers great deals on a large selection of smart phones, cell phones, tablets, and accessories. The company is headquartered in Port of Spain, Trinidad and Tobago and has 11 retail locations nationwide. The company has relationships with all OEM (Original Equipment Manufacturers) as well as gray market and foreign market procurement experience. Its centrally located, air conditioned warehouse has 3,000 square feet of space. Cellmaster can provide nationwide delivery within 24 hours of an order placement. Its logistics division provides national and international courier services. – www.cellmaster.com

Redknee Solutions Inc. – Founded in 1999, Redknee Solutions, based in Toronto, Canada, is a global provider of OSS/BSS software products solutions and services to the telecommunications industry, providing critical real-time monetization software to more than 250 customers, and delivering the most innovative real-time billing and customer-care solutions in the market. With more than 1,800 employees across the globe, Redknee is focused on helping its customers deliver and charge for services in new and innovative ways. Its solutions touch more than one third of the world’s population on a daily basis. Redknee’s customers include a global list of network operators, such as AT&T, O2, Singtel, Telefónica, Telus, T-Mobile, Vodafone, and Zain. – www.redknee.com