Barbados Agricultural Development and Marketing Corporation – The Focus is on Food

The mission of The Barbados Agricultural Development and Marketing Corporation (BADMC) is to develop the non-sugar, agricultural sector of the country through innovative technological applications and technical and marketing research, and to create opportunities for investment that engenders enterprise, food security, and prosperity.

BADMC is a statutory corporation of the Barbadian government’s Ministry of Agriculture, and is governed by its own Board of Directors. It was formed in 1993 by combining two existing operations – the Barbados Agricultural Development Corporation and the Barbados Marketing Corporation – with the idea that the overall agricultural sector in Barbados would ultimately be benefited more by a strong unified entity than with separate organizations whose individual financial fortunes weren’t necessarily similar. 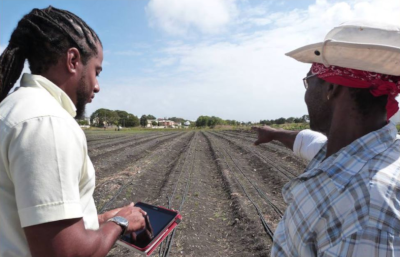 According to Shawn Tudor, the CEO of BADMC, for many years, agriculture in Barbados was not considered an important part of its economy and the food sector in Barbados was very much a trading operation. Employing the concept of “comparative advantage,” the government and the country’s mercantile class were content to import most food products and resell them, as that was the most advantageous way of doing business. Barbados was more actively pursuing tourism and financial services – sectors in which it had a comparative advantage over other locales.

That all changed in 2008. “Then came the financial crisis and commodity prices became very expensive,” says Tudor. “And there was a complete reversal. All of a sudden, there became a significant and strong focus on food security for the country. And the emphasis was once again put back on this agency to deliver it.” Thus, over the last several years, BADMC has been rebuilding and rebranding itself in terms of the services it offers. Its aim is to help transform and reposition the agricultural sector in Barbados with particular attention being paid to the effective use of resources, as well as the adoption of appropriate technology and sound management practices, in order to achieve internationally competitive production, processing, and marketing enterprises. “The organization restructured to meet modern requirements, while not neglecting the significant work and contribution that we make to agricultural development at the primary projects level,” says Tudor.

Ann-Marie King is Head of the Agribusiness Division of BADMC. She details the agency’s new structure: “BADMC is now divided into three mission-critical divisions: the Agricultural Services Division – that’s the arm that deals with the developmental services that we offer to facilitate farmers, including the leasing of land, the provision of crop irrigation, the provision of motor tractor cultivation services, etc.; we have an Agribusiness Division, which now incorporates food innovation and food production, all utilizing locally-sourced agricultural products, both livestock and crops; and we have our State Trading Enterprise which champions the expansion of consumption of certain critical crops and livestock produce.”

Agriculture represents only about three percent of GDP, and employs an equally small percentage of the population. Yet, Tudor maintains that the food industry in Barbados is more important than those numbers would suggest. “We have an indigenous population of 300,000, but we get 600,000 long-stay tourists, and we also get 600,000 cruise ship tourists, a year. So you can see that the food industry in Barbados is much larger than it would first appear from the size of the population, because you are providing food for a million people a year, because of the tourism industry. We have a food import bill of seven to eight hundred million a year.”

Tudor believes that BADMC’s major focus on food innovation can help to lower that amount and sees Barbados, as, one day, being a net exporter of value-added food products. “In the last year, we innovated about 15 products,” says King. “We’ve been able to commercialize probably about half of those on a small scale, but ultimately, what we believe is going to be most valuable for Barbados, is making the food innovation intellectual property we create, export-ready – something that Barbados can sell anywhere in the world.” 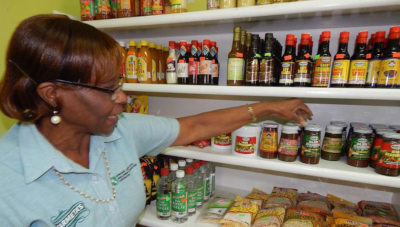 The Food Innovation Units of BADMC’s Agribusiness Division currently produces the Carmeta family of gluten-free flours, flour mixes, baked goods, desserts, and seasoned meats which exclusively feature locally-sourced agricultural produce – primarily cassava, sweet potato, breadfruit, beef, pork, and black belly lamb – as their main ingredients. “We realize that the gluten-free market is a burgeoning market across the globe and so we focused there, utilizing our locally-grown cassava, breadfruit, and sweet potato,” King explains. “We also have a gluten-free pork sausage. This has a value chain benefit for our farmers in that we’re taking produce that is produced here, that would normally be sold on the fresh market which can be extremely competitive and prone to gluts and scarcity, and creating some stability there and the opportunity to gain contracts. Let me give you an example. We’ve taken regular cassava and we have developed products including cassava cheese cake, cassava sponge cake – we’ve even developed a cassava sorbet that contains no milk and it’s made from cassava flour. It’s dairy-free and gluten-free and lactose-free and still has great taste. It’s high in fiber, high in potassium.”

“These are products that have never existed anywhere,” she continues. “No one else in the world has ever produced them. So, whether we commercialize a product, locally, in partnership with a food manufacturer, or we’re able to sell that commercial formulation and license it, or just sell it, outright to a global food producer overseas, we see ourselves contributing to the economy – not only in terms of revitalizing productivity within the non-sugar, agricultural sub-sectors, but also creating valuable intellectual property that we can market, internationally.”

In order to better carry out is various functions, BADMC has recently increased its number of employees from 140, two years ago, to 188, and budgeted monies for employee training. “We have bucked the trend of a hiring freeze across the public sector,” Tudor declares. “We’ve hired the best people that we could from the private sector. We’ve invested in human capital and in the growth of every employee. And we are now reaping the benefits of very high employee engagement with a lot of innovation coming from the staff. Our productivity has increased significantly; the finances of the corporation have turned around significantly; we have gone from an operating deficit of 20 percent down to an operating deficit of two percent. And we have advanced the cause of food innovation using the talents of our colleagues.”

In order to get the word out on BADMC’s programs and products, the agency participates in all the major trade shows in Barbados related to agriculture and manufacturing. “And, most recently, we have started to attend trade missions in collaboration with another one of the important agencies here in Barbados, the Barbados Investment and Development Corporation (BIDC),” says King. “We’re looking for new markets for our value-added products as well as for the intellectual property products that we are creating. Earlier, this year, at BMEX (Barbados Manufacturers’ Exhibition), we were distinguished as the best booth in terms of food promotion. So, we certainly work hard to keep our standard up.”

“We also have done some work in trying to access the UK market and the Canadian market, but our efforts are still in an embryonic stage,” King adds. “We also have our Carmeta brand of locally-manufactured products, which we market in local supermarkets, as well; that’s also an expanding effort for us. We touch the public; we also touch many non-governmental organizations, as well as government agencies. So, there are quite a number of ways in which we promote food.”

“In the recent past, we have distinguished ourselves as the leading center for food innovation in the county,” Tudor says in summation. “We have created an environment where innovation is encouraged. Our country is ready for investment in agriculture because our focus is on food security, food production, food manufacturing, and value addition.”

WHAT: A statutory corporation of the Ministry of Agriculture