A zero waste future for Aruba

EcoGas Free Zone N.V. is a subsidiary of EcoTech Aruba N.V. – a company established under the umbrella of Aruba-based, MetaCorp N.V. Metacorp’s business interests include movie theaters; a heavy equipment transportation company; a Coca-Cola bottling plant, which includes a brewery for the production of a local beer; a ready-mix concrete company that also manufactures blocks and pavers; stevedoring concerns in the country’s ports; a recycling plant that turns demolition rubble into aggregate and wash water from the bottling plant into semi-potable water for use in the concrete plant.

EcoTech’s complete waste management program consists of waste collection for commercial, industrial, medical, residential, and maritime clients – supplying a wide range of totes, bins, buckets and oil totes which are serviced by a fleet of 22 MACK trucks. After pick up, all the collected waste is brought to the EcoTech sister company, EcoGas Free Zone N.V. – a state-of-the-art waste separation plant built in 2009.This facility separates the sand, glass, rocks, organics such as food waste, ferrous metals, and non-ferrous metals out of the waste stream. Marketable recyclables are exported around the world. The remainder of the waste, which is classified as refuse derived fuel (RDF), is further compacted to a 5:1 ratio and bagged into envirobales for storage. 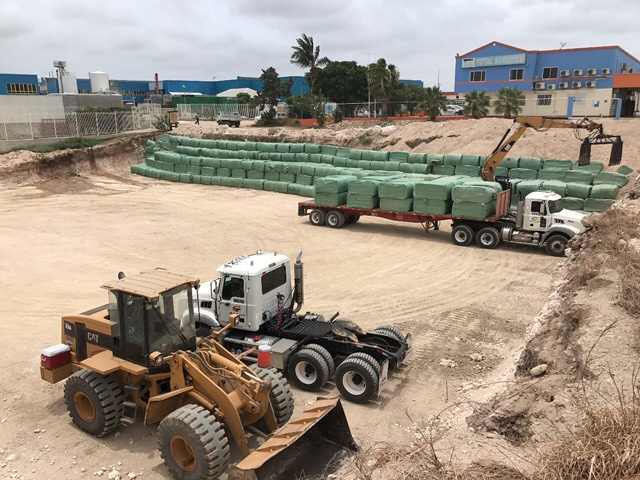 EcoGas and EcoTech are committed to assisting Aruba in strengthening its commitment to the important and timely issues of sustainability and renewable energy. EcoGas was formed with the vision of doing something more responsible with the municipal waste that was collected; 35 to 40 percent of all municipal waste on the island was going to an open landfill, creating an environmental challenge. EcoTech started first with recycling. The recyclable products that can withstand the cost of freight for export are now limited only to aluminum, scrap metal, and carton paper. The rest are separated, shredded, baled, and bagged in envirobales that contain municipal waste reduced to RDF, which is non-toxic and all carbon-based. These envirobales then get placed and capped into abandoned granite pits to restore the landscape to its original grade.

The initial idea for EcoGas was to take the RDF and gasify it – converting the municipal waste into energy by means of pyrolysis, a thermochemical decomposition of organic material at elevated temperatures in the absence of oxygen. The word is coined from the Greek-derived elements pyro for “fire”, and lysis meaning “separating.” While pyrolysis, as a technology, has existed for a very long time, EcoGas featured the only existing pyrolysis system that operated 24/7. The company bought a process from an American firm, however, once the plant was installed and ready for commissioning, they discovered it was not sustainable. For two years, experts were engaged from Europe and the U.S. to troubleshoot, change, and re-engineer many of its components. Finally, it was able to deliver gas to the power plant of Aruba for a period of several months.

The goal was for EcoGas to become the first waste-to-energy company in the Caribbean, significantly reducing non-recyclable waste, while at the same time helping Aruba to become less dependent on imported fuel. The gasification plant was projected to produce approximately two percent of the island’s total energy needs, and while the project is stalled at the moment due to mitigating circumstances, its ramp up to a full-scale operation in the future is still a key objective. Meanwhile, instead of gasifying the MSW (municipal solid waste), EcoGas is baling the non-hazardous waste and burying it in open pits. EcoTech has sufficient capacity to handle all of Aruba’s MSW, and when EcoGas is back in operation, the landfill can be rehabilitated and capped. The gas plant is touted as an ideal alternative for any island or remote community where there is no way of disposing of waste. It not only gets rid of the waste but also generates power at reasonable prices. 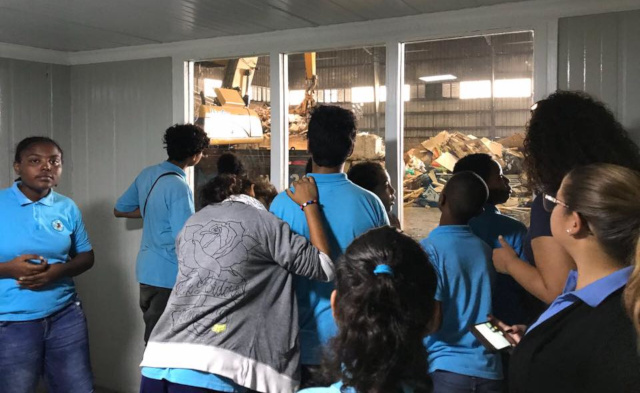 The EcoGas team believes that in order to scale up and, someday, export the waste-to-energy technology that the company has initiated, it will need to partner with a larger entity in the waste and/or energy sectors. Due to MetaCorp’s geographical location and its presence in a multi-national and multi-lingual society, it is well-positioned to act as an intermediary between Aruba and any company looking to do business in the region. The technology and precedence with which EcoGas has operated has established it as a company that is forward thinking and ready to lead the Caribbean region, and perhaps even the global stage, as the world faces today’s sustainability challenges.

Alfredo Ruiz accepted the position as Managing Director in June 2019 and is responsible for the daily operations and maintenance of EcoTech – the larger waste collection company of Aruba – as well as the daily management of EcoGas – the Aruba WSP (waste separation plant). The two companies have a combined total workforce of 85 people, many of whom are long-term employees with 30 or more years of service. “We treat the humans as our first priority,” says Ruiz. “That’s why they stay with us for such a long period of time. It’s a good place to work and we value their contribution.” Ruiz notes that his companies also have a great relationship with R & R LLC – a valuable supplier of baler equipment and supplies for the EcoGas plant.

Aruba takes its responsibilities as an environmentally-conscious Caribbean island seriously. And EcoTech and EcoGas are ready to play a leading role in the years ahead. As Ruiz explains, “EcoTech has many more clients now for waste and recycling; both our commercial and household divisions have increased in numbers. In the hospitality industry, we have business with 90 percent of the hotels in Aruba. Fifteen percent of incoming waste is now being recycled. Soon, the produced RDF will be exported which will lead to a 100 percent recycle. Our main goal is to recycle as much as possible and, eventually, go to zero waste. That’s our target.” It’s an ambitious, and definitely attainable, target that bodes well not only for Aruba but for the health of the planet, as well.

What: A waste-to-energy company

Baoase Luxury Resort – A legacy of...