Gateway to the Eastern Caribbean

Business View Caribbean profiles the VC Bird International Airport and Antigua/Barbuda Airport Authority for our focus on Best Airports in the Caribbean.

VC Bird International Airport (VCBIA) is the international gateway to the Eastern Caribbean bringing excited tourists to their dream vacation hotspots in gorgeous Antigua and nearby island destinations. As the largest Leeward Islands airport, VCBIA handles over 860,000 passengers per year and accommodates a variety of major airlines with direct flights to and from Antigua and around the world at its St. John’s, Antigua facility. Carriers hail from Europe (Virgin, British Airways, Thomas Cooke); the U.S. (United, Delta, American, Jet Blue); Canada (West Jet, Air Canada, Sunwing); and the Caribbean (Caribbean Airlines, and LIAT, which is headquartered at VCBIA).

VC Bird International Airport is managed by the Antigua and Barbuda Airport Authority (ABAA) – a statutory body established by an Act of Parliament in 2006 with a mandate to make provisions for the ownership, control, management, and development of airports in Antigua and Barbuda. ABAA also manages the operations of Codrington Airport, which is located on Barbuda. Although Antigua and Barbuda are sister islands that share a single government, they were affected quite differently by Hurricane Irma in September 2017. The eye of the hurricane passed over Barbuda – devastating Codrington Airport along with most of the island. However, thanks to the diligence of countless helping hands and generous contributions, ABAA was able to put that airport back into operation in just a few weeks. In a fortunate twist of fate, VC Bird Airport was not significantly damaged by the storm because Antigua avoided a direct hit. As such, the island became a safe haven for residents and tourists evacuated from Barbuda. 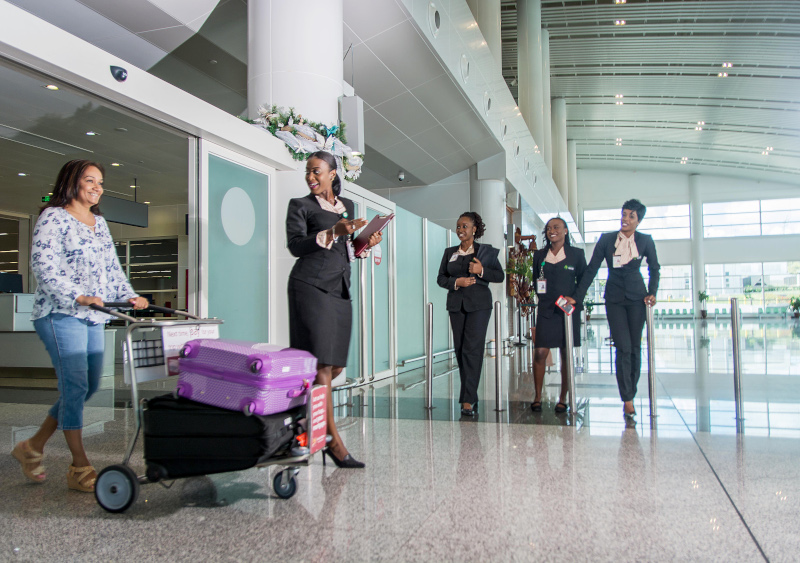 VCBIA had its own renaissance in 2015, after three years of construction. The current facility is 23,000 square meters in size with one 3,000-meter runway capable of accommodating jumbo airliners, as well as smaller aircraft. Currently on the agenda is repurposing the old terminal building. ABAA has developed a Terminal Reuse Plan to actually synchronize the old terminal with the new one; adding new administrative offices, a welcome center, and possibly a 50-room hotel. The old and new would become one terminal building, physically joined with a transition piece where there is now a gap. The redesign will incorporate construction standards for a Category-5 hurricane, with the structure maximized to withstand sustained winds of 150 miles per hour and gusts of 180.

The project is in the concept stage – artists impressions and a footprint layout are complete. The next step is to start building out the administrative portion of the Terminal Reuse Plan, which would likely span over a three-to-four-year period. The Antigua and Barbuda government will lend funding support, but most will be done internally from ABAA’s own revenue. The company that developed the Terminal Reuse Plan are consultants from overseas and local and outside contractors will be used on the project. A concept of such magnitude will require many different entities to fulfill the plan. In other expansion news, the Airport Authority has taken over the cargo facility from the Ministry of Finance and will be renovating and signing agreements with the different stakeholders with respect to charging them fees for airport services.

In addition to that, the catering company, Goddard – which has been servicing VC Bird for many years – is completing construction of a new catering facility. ABAA will take over the existing facility, with the view of developing it and also using a portion for cold storage of perishable items, such as fresh flowers and lobster. Antigua does have a large lobster trade in Europe, but because the island does not grow much food, or produce other goods, the cargo throughput coming in is greater than that going out. But passenger volume far exceeds the rather low cargo numbers. With respect to the terminal building, the passenger throughput is about 860,000 people per year, balanced between incoming and outgoing passengers.

Increasing passenger throughput is high on the to-do list because, while the theoretical airport capacity is 1.5 million per year, the actual capacity could be 2.5 million. At 860,000 it’s obvious the terminal is grossly underutilized. That being said, one of the challenges is to get more tourists to Antigua and therefore more passengers through the building. In that regard, ABAA has partnered to a certain extent with the Antigua and Barbuda Tourism Authority to improve the service, and the number of passengers has increased. They jointly take part in the Routes Aviation conference to sell the island, the tourism product, and the airport to airlines and tour operators from around the world. 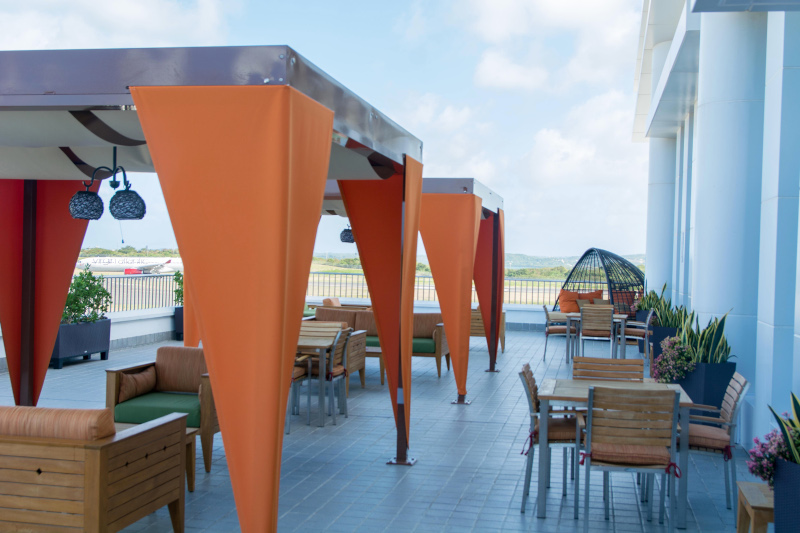 Another opportunity ABAA is trying to capitalize on is the number of retail operations in the terminal building. It is satisfactory now, but could definitely improve the offerings available to passengers. The commercial department, under the purview of ABAA’s finance department, has approached different entities in an effort to bring in more services for the concession program. RFP requests have gone out both locally and internationally – if the company is a good fit, the Authority will give them the space to do their build-out. Contracts are usually from five to ten years because companies invest a great deal of money in their infrastructure and product and need that long-term period to get a good return on investment.

VCBIA is a major employer in Antigua with a staff of 330 people. In addition, on the service side, there are approximately three times as many workers for the other stakeholders: airline companies, immigration, and customs that support a large number of employees. The future goal of VC Bird International is to become the airport of choice to the Eastern Caribbean – differentiating itself from other airports in the region by changing the culture, and significantly improving customer service delivery. Along with the total rollout of the Terminal Reuse Plan, ABAA intends to do some work on the runway, the apron and, hopefully, introduce more passenger loading bridges from the current three to anywhere from seven to thirteen.

Among its most important attributes, VC Bird International is an active airport. It’s changing with the times. It sees the customer experience as a priority. And moving toward the goal of being the preeminent airport of the Eastern Caribbean, it will do whatever it takes to ensure the customer has the greatest experience. The airport, itself, is the conduit – the gateway that leads into all the fantastic happenings Antigua has to offer. It’s the flight path to paradise.