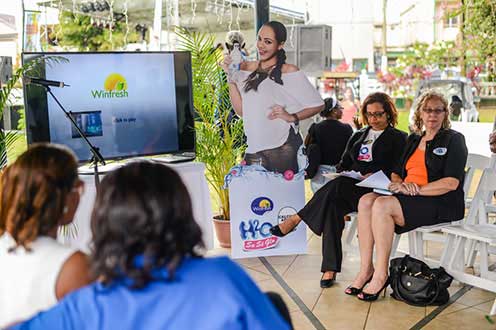 The Fairest of Them All

In 1994, the entity now known as Winfresh Limited replaced the Windward Islands Banana Growers’ Association (WINBAN), which was incorporated in 1961. WINBAN was limited by guarantee without a share capital and was owned by banana growers’ associations in Dominica, Saint Lucia and Saint Vincent, and the Grenada Banana Cooperative Society. WINBAN was established, initially, to administer a crop insurance scheme – the banana industry suffered severe damages from Hurricanes Janet and Katie in the 1950s and Abbey in 1960 – and its non-commercial functions were expanded to research and development and the administration of a supply contract between the banana associations and Geest Industries.

Winfresh was incorporated in 1994, as the Windward Islands Banana Development and Exporting Company Limited (WIBDECO). “We started simply as a banana company, exporting bananas from the Windward Islands. A wholly owned subsidiary, WIBDECO UK, was incorporated in the UK that did the importation,” said Bernard Cornibert, CEO since 1997 of the Winfresh Group – which now includes Winfresh Limited, Winfresh (UK) Limited, Sunfresh Limited, Vincyfresh Limited, and Grenfresh Limited, all wholly owned by Winfresh Limited. “Essentially we were just a banana company, but gradually over the years we have evolved. Bananas are still at the core of our business, but our intention is to be a multi-product company. The evolution has taken place as a result of the need to adapt to changing circumstances as much as to pursue opportunities.”

In contrast to WINBAN, WIBDECO had taken a distinct commercial role in the Windward Islands banana industry. For example, WINBAN’s budget was funded through a “cess” on export volumes from the four banana associations. It was not involved in competitive business activity and took no commercial risk.

Upon its formation in 1994, WIBDECO and its United Kingdom subsidiary, WIBDECO UK, took a decidedly commercial approach in dealing both with the market and the local Windward Islands banana industry – because protection that the Windward Islands banana industry had enjoyed in the EU market was being eroded and it would only be a matter of time before it faced the full force of market competition.

Therefore, WIBDECO’s first major task was renegotiating the supply contract with Geest Industries. It needed to transform the agreement from one with each of the individual banana associations to one involving WIBDECO and Geest alone, with WIBDECO maintaining supply contracts with the associations and assuming the commercial risks. Less than two years later, WIBDECO acquired the Geest banana business in a joint venture with Fyffes plc, a leading importer and distributor of tropical produce, with operations in Europe, the USA, and Central and South America.

WIBDECO took over marketing of the bananas from Geest in a new business arrangement with Fyffes in 2001, then, two years later, took full control of marketing and distribution of all of its bananas.

Though the retail price of loose bananas in the UK was 56 percent lower in 2009 than it had been in 2001, WIBDECO cushioned the Windward industry by introducing fixed, stable prices and absorbing all risks that had previously been passed to the local industry. This move gave Windward Islands bananas the premium niche segment of the market even as it was fully converting to Fairtrade — an organized movement whose goal is to help producers in developing countries achieve better trading conditions and promote sustainability.

A name change from WIBDECO to Winfresh was made to differentiate the existing entity from its product-specific past as a single-commodity company trading only in bananas from the Windward Islands. The new name, Cornibert said, represented a real change in direction to a diversified supply base and a diversified product base, i.e. having more suppliers and a wider range of products.

In fact, the Winfresh Group now comprises a number of subsidiaries involved in agro-processing and engaged in or driving crop diversification in the Windward Islands. Winfresh is investing in joint ventures in the Windward Islands and in the market, where necessary, to ensure that the business is as fully integrated as practicable. It also deals in fresh produce and value-added, processed products to meet market requirements.

Across all its facilities – in both the UK and the Windward Islands – Cornibert said Winfresh employs between 140 and 160 people. The number had been as high as 200 and was spread almost equally between the two regions, but it’s now more slanted toward the UK. Further growth back into the Islands, however, could result in an imminent doubling of that segment of the workforce.

“It’s based on the expansion of our food processing and manufacturing operations,” he said. We bought an outfit in Grenada a few years ago and there has been a delay in our starting operations there, but we are hoping to start there this year and we will be producing premium juices, jams and homemade ice cream directly from fruit. Our long term objective is to do all of our own processing from fresh in Grenada. In Saint Lucia, we are producing fruit beverages and bottled water, and in Saint Vincent we have a facility there where we are producing sauces and marinades and the like.”

Going forward, the corporate goals include growing shareholder value and continuing to serve as a wealth generator for the agriculture sector, using its resources to modernize and transform agricultural production in the Windward Islands.

“This will be a challenging task but Winfresh has demonstrated that it has the determination to face such challenges and it is confident that it will succeed,” Cornibert said. “But it needs its shareholders, suppliers, customers and stakeholders generally to believe in and support its vision and mission.”

WHAT: Agricultural export trader doing business in the Windward Islands and the United Kingdom