Abed & Company Ltd. was started in 1963 by the husband and wife team of Shouket and Milly Abed. “At the time, what was being offered in the marketplace was of extremely low quality and very generic in terms of fabrics, textiles, and home furnishings,” says Eddy Abed, the company’s current Managing Director and son of its founders. “And they felt there was a niche to be exploited.” According to Abed, his parents stocked their first store in Bridgetown, Barbados with goods from Switzerland, Germany, and Austria, that his father bought on a trade mission. But, that first year, the couple lost so much money that they closed the business in short order, with no plans to ever reopen.

However, in 1964, another opportunity arose when a space became available on Swan Street, the most popular thoroughfare in Bridgetown. With financial help from an uncle, Shouket and Milly tried again, and this time, they were successful. “The stars lined up in the right direction from then till now,” says Abed. “Business has grown from strength to strength.” Abed, himself, a civil engineer by training, joined the business some 35 years ago. “In the early ‘80s, my dad came to me and said that he wanted me in the business,” he recounts. “And, at that time, I was arrogant and brash and I told him that he couldn’t afford to pay me. Many, many times, I’ve eaten those words.” 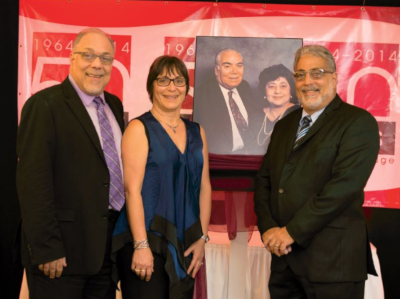 Today, abed’s, as it is known locally, is a retail/wholesale company that employs 106 full-time staff that grows to 120 workers during the holiday season, in its in Bridgetown and Sheraton Mall department store locations. “Our strength is ready-made apparel, textiles for apparel, and home furnishings, as well as ready-made home furnishings,” Abed says. “That’s our niche; that’s our core business. We also have other niche markets: we’re a large provider of basic costuming accessories and fabric for our annual carnival called Kadooment, and the other thing that we do is provide ready-made school uniforms and school fabrics.”

In addition to two select wholesale customers – one in Trinidad and one in Jamaica – who buy product by the container load, abed sells most of its products from its two retail stores. It imports directly from mills in Asia, and then adds its own styling and colors to the basic material. “We try to tweak in the direction that brings maximum local value added so that we can maximize the profit margins we need,” Abed says, “and that has really been where we have grown exponentially over the last decade.”

Abed believes that shunning the middleman, and adding its own local knowledge to the products it sells, are two reasons that his company stays ahead of the competition. “Our competitors, by and large, fall into two categories,” he explains. “They’re the mom-and-pops who will shop in Panama, Curaçao, or North America and buy through middlemen in much smaller quantities. But they’re buying a product that is already finished. They have no say as to styling or color range. So, we are buying much cheaper to begin with and, more importantly, we’re buying styling and colors that we have influenced.

“The second group is the larger stores who, to a large extent, will buy from a distributor on the island. The distributors on the island are buying from the Orient, but again, they’re working for margins and then they’re reselling to the retailers. We have the advantage of being much cheaper because we’re vertical, and, more importantly, we’re very, very deep in our lines. If you come into my turf, you have to be as deep as we are; you have to have as much inventory as we have; you have to have as many styles as possible that are currently available. So those that compete with us will come in second and third, every time. Our strengths are quality, pricing, local value added, and variety of merchandise available.”

In addition, Abed says that unlike the big box stores that have come to the island, abed’s has continued to grow because it can better respond to its customers’ needs and demands. “We have the ability to change and be responsive to our customer base. The big box stores, by and large, are managed from foreign entities who don’t have the ability to do that,” he states. “We keep growing our product offerings based on customer feedback. And for the last six to eight years, we have recorded growth in revenue, year in and year out, anywhere from five to seven and a half percent. And this is when our GDP, as a country, has shrunk by over eight percent in the last ten years. So, we know that the pie is not growing, but we’re getting a larger slice of the pie from our competitors.” 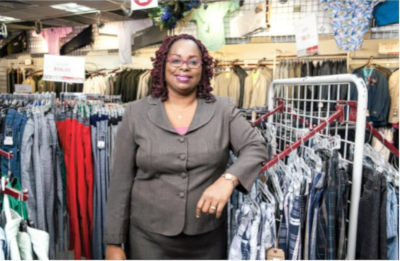 Finally, Abed gives credit to his employees who “go out and hustle everyday for our revenue. I know that no business can be sustained without an extremely loyal and proficient team, and I’m extremely blessed in that regard,” he avers. “At every level – my managers, my supervisors, my rank and file employees – bring an expertise and loyalty, and buy into the overall concept that if the business does well, by extension, they do well.”

Looking toward the future, Abed lays out several initiatives. “We currently have a presence on the World Wide Web, but not enough of a presence where we’re selling,” he states. “As of 2017, we intend to be more robust in that market and start selling online. I don’t need to tell you what a large percentage of retail sales are on the internet. We can’t ignore that any longer. Our consumers are electronic-savvy; they’re all consuming on the net, 24 hours a day. We understand that we need to have a presence, so we’re moving rapidly. By the fourth quarter of 2017, not only will we have a presence on the net, we will sell on the net. Within five years, I’d like e-sales to contribute to overall revenue by at least 10 percent; I’ve been informed that that is very realistic.”

“In the medium term, within 24-30 months, we hope to have another large department store in the Warrens/Welches area, which is the newest commercial center in Barbados,” Abed continues. “All of the major highways in the country intersect there. It has been growing exponentially over the last 15 years, and every study we do tells us that our customer base wants us to be there. So, we will be putting down a sizable store there, somewhere in the 10-12 thousand square foot range.”

“Finally, within ten years, we would like to go public and start increasing our footprint across the Caribbean,” he adds. “We feel if we had a franchise type arrangement where we bring to bear a large variety of what we do to some of the other Caribbean islands, it will give us a much larger revenue share. We’re not reinventing the wheel, but we understand what is being done in the marketplace and we feel that that’s where we need to be.”

Even after 35 years in the trade, Eddy Abed still displays a fervent enthusiasm for the enterprise that his parents began over half a century ago. “My parents started this business with a passion – a mom-and-pop employing 1-2 persons,” he declares. “Today we employ 120. What got us here is their passion, their vision. They grew a business to the point that it became a household name in this country.”

WHAT: A wholesaler and retailer of fabrics, garments, and soft home furnishings