St. Vincent and the Grenadines on the cusp of a major take-off

National Properties Limited was incorporated by the government of the multi-island state of St. Vincent and the Grenadines in 2001 under the Companies Act of 1994, and commenced operations in 2003. “It was set up to harness and optimize the performance of various failed, underperforming, or idle assets owned by the government, and also to facilitate the socially desirable privatization of those assets that were considered potentially viable financially and commercially,” explains its General Manager, Harold Dougan.

To this end, many public assets were vested in National Properties, and continue to be vested from time to time. These assets have been found to be suitable for a variety of purposes, including tourism, urban, residential, agricultural, and industrial development. “Currently, assets owned by National Properties have been valued to be in excess of $400 million Eastern Caribbean dollars,” says Dougan. To these should be added properties of substantial value, legally owned by other state entities like the International Airport Development Corporation (IADC), but under the full management of National Properties. The options for these various properties include selling them to private owners to develop, investing in them with the intention to operate and/or manage them, or pursuing joint-venture arrangements with either private developers or other government institutions. In fact, in discharging its mandate, it is more than possible that National Properties could ultimately divest itself entirely out of business over time. “But we don’t imagine that will happen at any time in the near future,” Dougan adds, wryly.

The company has some 15 employees attached to its main office in Diamond on the main island of St. Vincent, but its direct employment involvement accounts for hundreds of employees through businesses it owns solely, like its ongoing farms at Orange Hill and Peter’s Hope, and businesses in which it is a founding shareholder, like the Massy, three-store supermarket chain. By the efforts of National Properties, the old government Marketing Board property and operation in Kingstown, the capital, that was vested to it by the government, evolved into a Save-A-Lot supermarket joint-venture with Consolidated Foods Ltd. of St. Lucia in 2011, then to a Super J 3-store chain when Consolidated Foods merged with Aunt Jobe Supermarkets, and now to a 3-store Massy (of Trinidad and Tobago) supermarket chain. The evolution of the failed government Lauders Value-Added facility is also of interest. This project, established to supply fresh, peeled, packaged, frozen root crops, vegetables, and fruits to the market, simply foundered, then was vested in National Properties. In time, National Properties forged a joint-venture called VincyFresh to develop this operation with Winfresh, the successor company to WIBDECO that marketed bananas in its heyday. Seeking after major diversification and still possessing substantial international outreach, Winfresh expressed its interest in developing VincyFresh on its own, and National Properties divested both its shares as well as a factory facility it had built in Diamond for an upgraded food-processing operation.

Other public assets vested in National Properties include what was once a sugar warehouse, built in 1814, in Kingstown. Considerable refurbishment work was done on this building to convert it to a hotel, and it has been operating quite successfully for many years now, under a leasehold arrangement, as the Cobblestone Inn.  Another property at Canash, previously the home to operations by Caribbean Sailing Yachts and Sunsail, was sold by National Properties and has been beautifully developed into the Blue Lagoon Hotel and Marina. The major hotel outfit, the Buccament Bay Resorts, was established on lands sold by National Properties. This hotel has been plagued for some time by problems of entirely external origin, but National Properties is confident that the issues of this very valuable physical asset will, in time, be resolved and the hotel would be soon on stream again with a vengeance. The old dilapidated Canouan Beach Hotel property on the island of Canouan was returned to the government to enable it to join the international developers there in a Public/Private Partnership venture to construct a world class marina, now nearing completion. This marina will feature some 110 berths, some of which will accommodate yachts up to 110 meters, and will give a massive boost to yachting tourism in St. Vincent and the Grenadines.

National Properties also owns properties that help maintain its operating budget. One such property is the medical school property at Ratho-Mill.  “St. Georges University used to be in St. Vincent,” says Dougan. “Now they are fully in Grenada. When they left St. Vincent, the property that they were renting from the government, was vested in us. Since that time, we have gone ahead with a new arrangement with the Trinity School of Medicine. They are leasing from us and paying a fair rent. So, they are an ongoing customer.” The Campden Park Industrial Estate, on which most of St. Vincent and the Grenadines’ manufacturing sector, including the Hairoun Brewery, is located is also owned and managed by National Properties. Most of the businesses are tenants who pay rent.

Government also vested lands in the International Airport Development Company (IADC) to provide a source of funds for the construction of an international airport at Argyle. The partnering of NPL and IADC in the proper and planned development and sale of jointly-owned land was a logical outcome. To date, National Properties has developed land at three sites on the Grenadine island of Bequia with roads and underground infrastructure for electricity, telephone, and television services for the sale of some 170 lots, ranging in size from 11,000 to 30,000 square feet for residential purposes. Much of the proceeds from the sale of residential lots, to date, went to IADC to help the cost of the international airport construction.

The new Argyle International Airport is scheduled to open in February, 2017. “When that airport commences, our old airport at Arnos Vale is going to be decommissioned and the land has been vested in National Properties,” Dougan says. “It is the policy of the Government to develop this old airport site as a planned, modern, upscale extension of the capital city of Kingstown when this happens. It will involve a tunnel under the Cane Garden promontory that connects the Arnos Vale site directly to the capital. Our master planners think the tunnel will add to the synergy of the two parts of the city. That is a project that we think is a very active one.”

Possible uses for the Arnos Vale property include:

Up until now, National Properties has been spearheading initiatives to redevelop the E.T. Joshua Airport site. In the meantime though, a government-owned company, the Arnos Vale Development Co. Ltd., has been formed to manage the redevelopment. In due course, this company will be staffed and housed and will assume full responsibility for carrying out its functions as it sees fit and in line with its mandate.

Not all properties that came under the ownership of National Properties came to it via the government. The relationship between National Properties Ltd. and Bank of St. Vincent and the Grenadines goes far back. When it was the National Commercial Bank (NCB), this institution offered the sale of its branch properties to National Properties on the grounds that it was being required by the East Caribbean Central Bank (ECCB) to sell off some of its properties since it had too much of its assets in real estate. These properties were bought by National Properties. When, in 2010, by which time their circumstances had changed, and still prior to their becoming Bank of St. Vincent and the Grenadines (BOSVG), this institution wished to buy back the properties, with the exception of the Reigate property on which NPL was constructing a major building. NPL agreed, and the buy-back was completed. The Reigate building, originally conceived for multi-occupancy, morphed, with the passage of its construction and under a multiplicity of variation requests from the NCB, into a specialized NCB bank building. When it was considered how problematic it could be to find tenants for a specialized banking building, NPL welcomed the opportunity to sell it outright to NCB, which by that time had become the Bank of St. Vincent and the Grenadines, when they offered to buy it. The Reigate property was sold for $22.5 million in August, 2011.

Damon Brown is the Promotions and Marketing Manager for National Properties, responsible for reaching out to private developers and other potential partners. “Among other things, there is an annual conference in Miami that we attend, which brings together hundreds of the leading minds in the tourism industry from Latin America and the Caribbean, including but not limited to investors, owners, lenders, hotel chain management, company executives and the like,” he relates. “That is one of the main avenues we use to market. But, of course, throughout the region, there are potential investors with whom we are constantly engaged. Some of them have been reluctant to commit mainly because of inadequate airlift. We can safely say, now, that with the imminence of the airport, the interest is heightened and we anticipate, over the short and medium term, major investments will take place.”

Desmond Morgan, a director on the Board of National Properties is equally optimistic. “I think five years from now, that we would have attracted several international investors and our hotel/tourism sector would have come alive,” he declares. “I think up until now, St. Vincent has been the best-kept secret with probably some of the best waters, yachting facilities, and natural beauty that the world has not yet seen. One of our main challenges has been our difficulty in moving people by air.  With our international airport to attract tourists and serious funders, we will look at all options for the development of this country as we engage with viable business entities, be they industrial, commercial, or in the tourism sector.”

“So, things are on the move!” Dougan proclaims. “The Argyle International Airport is scheduled to open in February, 2017. And St. Vincent and the Grenadines is now on the cusp of a major economic take-off.”

Check out this handpicked article on The International Airport Development Company.

WHO: National Properties Limited
WHAT: A government-owned company that manages real property on behalf of the state
WHERE: Diamond Industrial Estate, St. Vincent and the Grenadines
WEBSITE: www.svgnpl.com 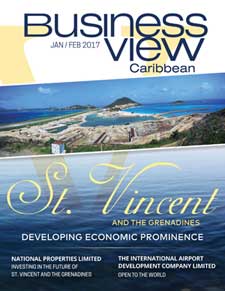 Montserrat Port Authority – Building for the...