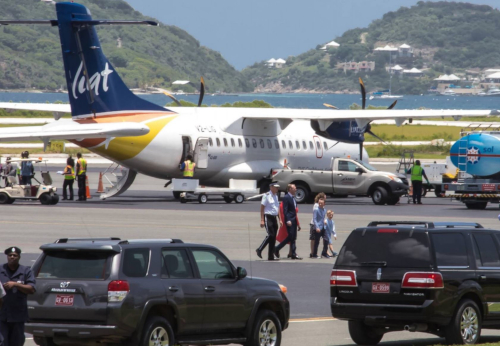 The BVIAA operates three airports in the British Virgin Islands: the Beef Island Airport, renamed the Terrance B. Lettsome International Airport in 2002; the Auguste George Airport in Anegada; and the Taddy Bay Airport on the island of Virgin Gorda. In addition, the BVIAA operates a water aerodrome in the North Sound and helipads on Beef Island.

Since its incorporation, the BVIAA’s operating expenses have been underwritten by a government subvention, an amount which was programmed to be reduced, over time, with the intent of having the Authority become completely self-sustaining, and its operating funds generated by way of a departure tax, and various user fees for security, development, and landing. Unfortunately, within a short period of time after its establishment, the British Virgin Islands Airports Authority met with some strong headwinds.

Denniston Fraser is the Managing Director of the British Virgin Islands Airports Authority and also serves in the capacity of Executive Member of the Board. When Business View Magazine first spoke with Fraser in 2016, he explained the nature of the Authority’s first major challenge. “In 2007, when we had the recession, the airlift numbers went down,” he reported. “In addition, we had American Eagle, which operated quite a number of flights to San Juan with connections on to the rest of the U.S. and elsewhere. They ceased their operations in the Caribbean and that really affected our numbers, as well. So, what we’re trying to do is get airlift back up, hopefully, beyond where we were in 2006, which was one of our peak years.”

Dennison went on to talk about the international airport’s master plan, which included some extensive infrastructure upgrades. “The principal reason for the expansion,” he continued, “is so that we can have larger aircraft coming to the BVI. Currently, we’ve got a runway of about 4,900 feet, with about 4,000 of that, available for landing. With that type of length, we can just get commercial aircraft to Puerto Rico or anywhere closer than that.  We’re hoping to have direct flights that will take us, at least, to Miami and possibly to New York, and Montreal or Ottawa. And for that, we recognize that we’re going to need at least 7,000 feet of runway. So part of our expansion plan is to increase the length of our runway. We also would, necessarily, have to increase the capacity of our terminal building for both arriving passengers, and also the departure hall. We also are going to be looking at increasing the size of our apron, so we will be able to park the bigger planes.”

Unfortunately, in 2017, those plans were dashed when Hurricane Irma, the strongest Atlantic-forming hurricane ever recorded, passed directly over the British Virgin Islands, followed just four days later by Hurricane Maria. Recently, Business View Magazine caught up with Fraser to find out how the British Virgin Islands Airports Authority has dealt with the ramifications of those catastrophic storms.

“We’ve had a real setback since the hurricanes,” he begins. “We were on track last year, in terms of moving forward with our master plan, and had really expected last year to be a major comeback – the first real profit year since the recession of ’08. But we had two major hurricanes and, in addition, just one month prior to the hurricanes, a severe flood. So, since then, we have been in recovery mode, fixing and building back buildings and so forth. At the airport, itself, we are still recovering in terms of building back the administration building, and the project office, and the fire station.”

“Also, our airport on Virgin Gorda was closed in May and will be re-opened by Sept,” Fraser adds. “We suffered damage from the hurricane, which really affected the fire tender at that airport. And we had to replace that tender. So, that airport is going to be reopened in time for the upcoming winter season.”

“We also had some challenges in terms of the insurance – getting compensated adequately and we’re still in a waiting mode for that,” he continues. “Once we get all the funding from the insurance, we hope to go ahead and follow our master plan, again, which would include not only building back the buildings, but expanding the administration complex. We also have designated a spot for five aircraft hangars, where once we had three. All of our hangars were completely destroyed in the hurricanes. So, we’re thinking that by the end of this year, we should be on our way in terms of building back our hangars and erecting two new ones.” 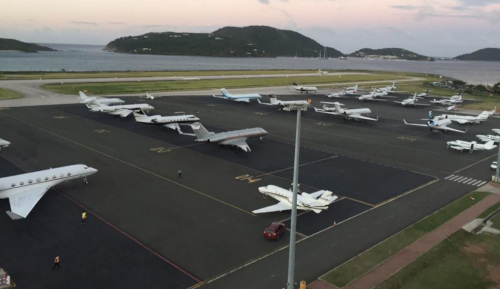 Regarding the expansion of flights, Fraser notes, “That too, is part of our master plan. When we last spoke, we were tendering for companies to bid for expanding the runway, which would accommodate those flights. Since then, we’ve had a shift in terms of tendering and the airport has decided upon a PPP, a Public/Private Partnership, with bidders to come in to finance, build, and operate the airport over the next few years. We’ve contracted a firm out of Canada to take care of that whole process for us, in terms of inviting bidders and evaluating the bids. We should have at least six or seven bidders to finance the expansion, build the expansion, and operate the entire operation. We hope to have that entire process wrapped up by next March – evaluating and choosing a bidder. Then we expect that, at some point next year, the bidder will take over the operation of the airport. So, we’re still on track for having those direct flights from Miami and, possibly, New York.”

“Two years is a good time frame to be back up to where we were, provided we don’t get hit with another catastrophic hurricane,” Fraser concludes, optimistically. “Within the next year, we should have our recovery monies in hand, so by next August, hopefully, we will back up. Certainly by the end of 2019, if all goes well, we should be back to where we were prior the hurricane.”

It’s been quite a bumpy ride for British Virgin Islands Airports Authority over the past several years. But with adequate funding, including some low-interest loans provided by agencies of the United Kingdom, plus the dedication of its Board of Directors and its approximately 180 employees, the British Virgin Islands Airports Authority is looking forward to some brighter skies ahead.

WHAT: Owner and operator of all airports in the British Virgin Islands 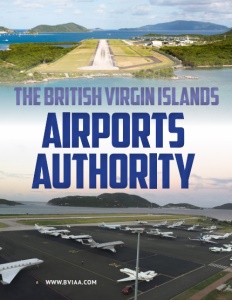