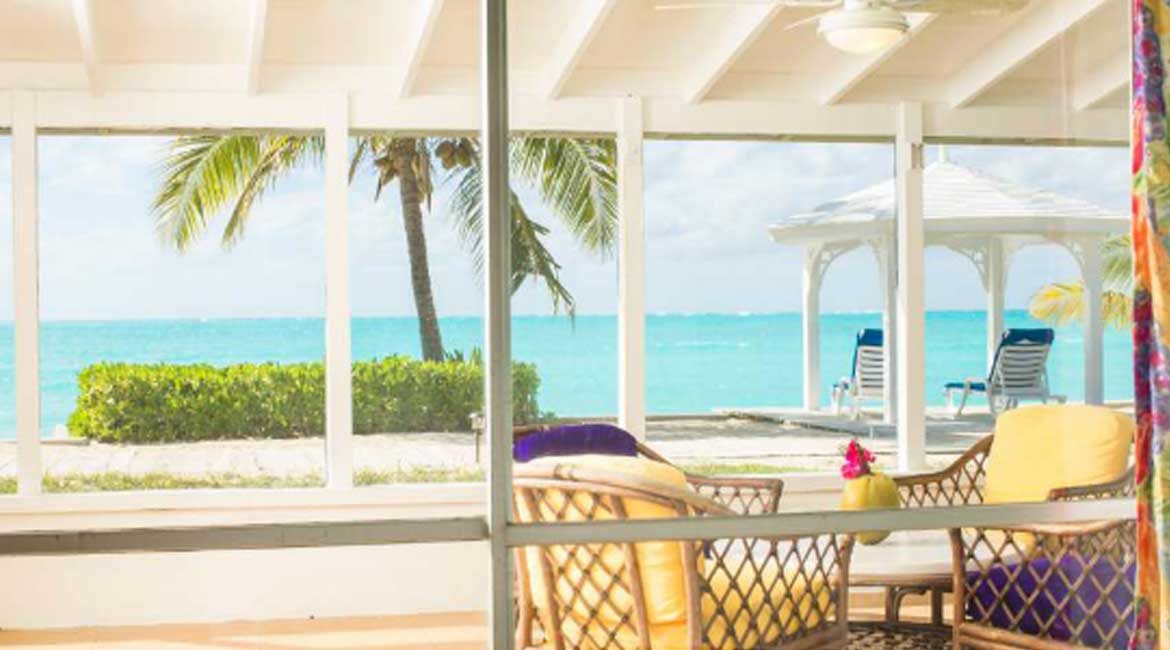 The 230-square mile Long Island is situated about 165 miles southeast of the Bahamian capital of Nassau in the western Caribbean. It is over 70 miles long and just five miles wide and the Tropic of Cancer runs through its northern quarter. Long Island was among the first lands visited by Columbus in 1492; in his ship’s log he described it as “the most delightful island in the world.” The island’s east coast features 150-foot cliffs with crashing surf, while Cape Santa Maria Beach on the island’s most north-western tip boasts mile upon mile of calm blue water and soft white sand.

To this idyllic spot, one day in 1990, came a Canadian by the name of Bob Wright, who owned a company based out of Victoria, British Columbia called Oak Bay Marine Group – a string of resorts, marinas, and attractions along the British Columbia coast and Oregon, U.S. “He started his empire about 54 years ago with a row boat and a fishing rod,” says Matthew Brear, General Manager of the Cape Santa Maria Beach Resort, which was eventually added to the Group’s portfolio. “He used to take people out fishing in Oak Bay, which is a suburb of Victoria. He grew that business into the largest sport fishing empire in North America. In 1990, he was at the Super Bowl in Florida and a friend said, ‘You’ve got to come and see this property on Long Island.’ They flew out here and fell in love with the location and the people.”

The property that Wright fell in love with was on a four mile stretch of white sand beach that has been recognized as one of the top ten beaches in the world. It featured a small hotel, comprised of six bungalows and, according to Brear, all but abandoned. But since all of his sport-fishing properties in Canada were seasonal, and the fishing off Cape Santa Maria Beach was among the best in the world, Wright realized that having a place where his customers could come and fish during the Canadian winter, was a winning idea.

Brear says that Wright renovated the bungalows only slightly, and stuck with a simple décor in order to keep it accessible and affordable for his “blue-collar fishermen.” Within a few years, though, “he recognized that the Bahamas attracts a different demographic and not everyone wanted to fish. So he developed the property to cater to those people. In 1994, he built a beach house which is the main activity center, and has a bar and dining room, and four more bungalows. They’re all duplexes. So that’s 20 bungalows in 10 buildings.”

The resort’s popularity grew over the next ten years. Wright had bought quite a bit of land when he made his initial purchase, so between 2004 and 2007, he expanded the property with 20, two-bedroom, luxury villas, which he sold as they came on line. Since the owners of the villas average only about six weeks of occupancy during the year, the villas become part of the rental pool, along with the twenty bungalows.

Brear says that, today, about 40 percent of the Resort’s guests come from the U.S.; 40 percent from Europe; and 20 percent from elsewhere. “We’ve got a loyal customer base that comes back year after year after year,” he states, adding that since the property is well off of the beaten path, it attracts a certain type of clientele. “People who come here, come here because they want to immerse themselves in a vibrant and unique culture. There’s no Starbucks down the street; it’s a remote property. And the airlift is not one that has been taken on by the major airlines.” In fact, many of Long Island’s visitors come in their own small, private planes.

This year, the Resort will be undergoing its first major renovation since 1994. “We’re doing a facelift,” says Brear. “We’re replacing a couple of roofs; we’re taking out the bathtubs and putting in shower stalls; we’re taking out the vanities and replacing them with marble vanities; we’re changing all the light fixtures; we’re changing from double queen beds to king beds, and putting in all brand-new furniture.”

Although sport fishing, bone fishing, deep sea fishing, and reef fishing, as well as snorkeling and scuba diving excursions, are still a part of the Resort’s activities (it has three boats), Brear says that fishing has become a “secondary draw,” and that, today, the Resort is more about its remoteness, its natural beauty, and its romance. Indeed, the Santa Maria Beach Resort was recently named the Second Most Romantic Resort in the Bahamas by Travel and Leisure Magazine.

But Brear is quick to add that people also come to the Santa Maria Beach Resort because of the attention given to them by its staff of 54 – all of whom are islanders. “It’s these people who drive the success of this business,” he says. “Only our Operations Manager, Darby, and I are not from the Bahamas. And I pinch myself to be so fortunate to be involved in such a unique property.”

He also firmly believes that being able to enjoy Long Island’s friendly and welcoming people is a draw that can’t be equaled by larger hotels in more populated destinations. “It’s the culture that is bringing people from around the world to our property,” he declares, “and we do everything we can as a property to ensure that that is our focus – not only provide people with a place to sleep on the beach, but to immerse themselves in the culture and community of Long Island.”

WHO: The Cape Santa Maria Beach Resort
WHAT: A beachside resort featuring bungalows and villas
WHERE: The northern tip of Long Island, Bahamas
WEBSITE: www.capesantamaria.com