The Fond Doux Plantation & Resort – The Best of St. Lucia 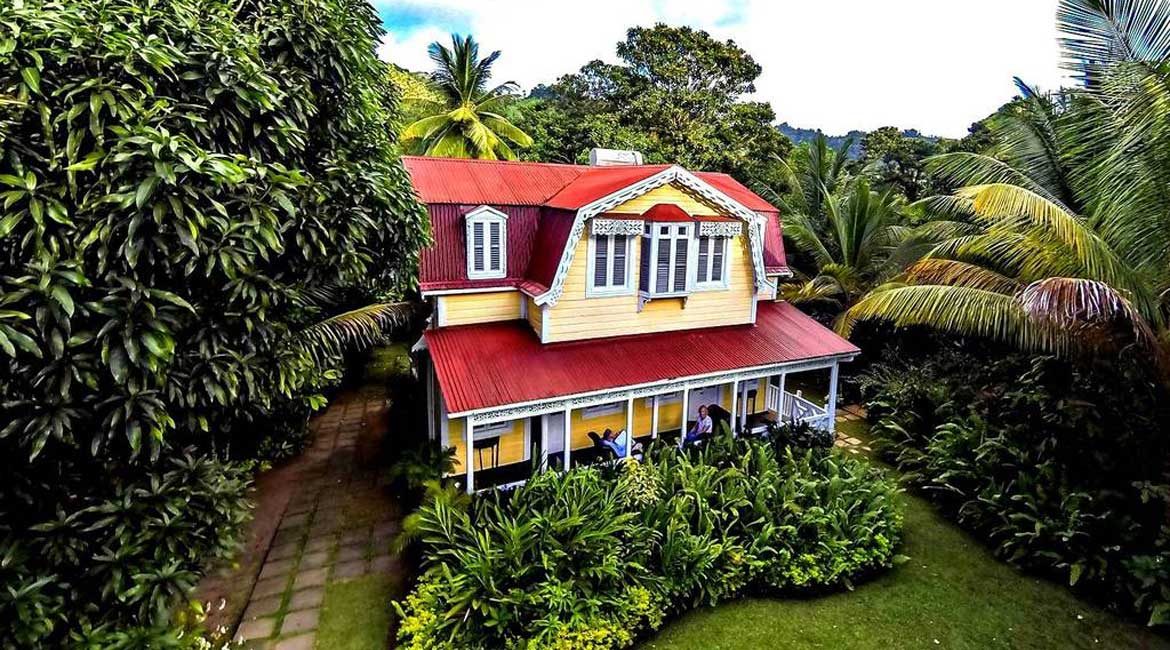 The Fond Doux Plantation & Resort is a 19th century, eco-friendly colonial resort nestled in the heart of St. Lucia, best known for its romantic, intimate, and private cottages. The resort is situated on 135 acres, amidst a 250 year-old working plantation, and features an assortment of 15 uniquely crafted, one- and two-bedroom cottages, two on-site restaurants, a collage of outdoor swimming pools, and an organic spa. It is located within the island’s iconic Pitons and sulphur springs area, about a ten-minute drive south of Soufrière.

Eroline and Lyton Lamontagne are the owners of the Fond Doux, which was purchased by Eroline’s husband’s father in the early 1990s. “At that time, it was still a banana and cocoa plantation,” Eroline remarks. Indeed, for many years, St. Lucia’s economy was built on agriculture. “A lot of farmers exported their green bananas to England,” she says. “They called them ‘green gold,’ because even though it takes nine months for a tree to a mature, after that, every week, you can cut bananas for export.”

However, when the European Union was created in the mid-1990s, St. Lucia lost its preferential treatment and the country began to diversify into tourism. “At the time, if you had a hotel in St. Lucia, you had to be on the beach,” says Lamontagne. “It was all about sea and sand. But then, there was a new trend: eco-tourism, where persons wanted that authentic feel; especially independent travelers who wanted to be responsible about the environment.”

And since Fond Doux is not on the beach, and is set back from the road on a UNESCO World Heritage site, its main appeal lies in its scenic beauty and its stature as a still-working plantation. Full of cocoa, nutmeg, and breadfruit trees, thick swathes of palms, bananas, and bamboo, and sprinkled with exotic flowers, the hilly, bird-rich estate is overpoweringly beautiful. “We started with just a restaurant and we catered primarily to the cruise ship passengers,” Lamontagne relates. “It did so well that we transplanted the first three cottages from the other end of the island. We broke them down, trucked them, and put them together on Fond Doux, and that was the start of the plantation resort theme and eco-tourism.”

Today, the resort’s one- and two-bedroom cottages are spread widely over the estate. They come with attractive fretwork, wooden floors, four-poster beds, perhaps rocking chairs on the verandas, and, in some cases, their own garden and kitchen. Angelina, the largest cottage, is a 19th-century, French colonial house rescued from St. Lucia’s capital Castries.

And in yet another bid to retain its links to the past, Lamontagne says that in addition to still growing cocoa on the property, Fond Doux is planning to ramp up cocoa production. “The fermenting huts are still there,” she says. “It’s a physical process; it’s not mechanized. It’s all done by hand in the old traditional way.

Lamontagne says that most of Fond Doux’s guests come from the United States, followed by the UK, and that they  are in the process of adding five more cottages. “We would not divert from the existing concept,” she insists. “We try to listen to what our guests tell us and a lot of them don’t want to see drastic changes. We don’t want to overbuild because one of the charms of Fond Doux has always been that all of the existing cottages are all tucked away into the vegetation. So, we would not want to change the intrinsic charm of this place. To destroy the vegetation and overbuild – that would be sad.”

In fact, Fond Doux’s commitment to environmental stewardship has been recognized internationally as The America’s Best Sustainable Boutique Hotel, having received the accolade in 2015 and 2016 at the World Boutique Hotel Awards ceremony, held in London.

Lamontagne stresses that in addition to its many amenities, including its two open-air restaurants that serve Creole masterpieces using the fresh, organic fruits, vegetables, and local spices harvested daily from certified organic farms; its Mamma La Terre Spa that only uses products made from all natural, organically grown ingredients; and its hiking and walking trails that offer magnificent views of the Pitons and the lush, tropical rainforest foliage; the most important part of the Fond Doux experience is the authentic St. Lucian hospitality offered by the resort’s staff of 62 employees. “There’s a family feel about Fond Doux,” she says, “with an authentic, innate hospitality. The other hotels directly in our vicinity are completely different in style. In St. Lucia, we’re the only one that has been able to achieve this.”

AT A GLANCE
WHO: The Fond Doux Plantation & Resort
WHAT: A 19th century eco-friendly, colonial resort
WHERE: Soufrière, St. Lucia
WEBSITE: www.fonddouxestate.com