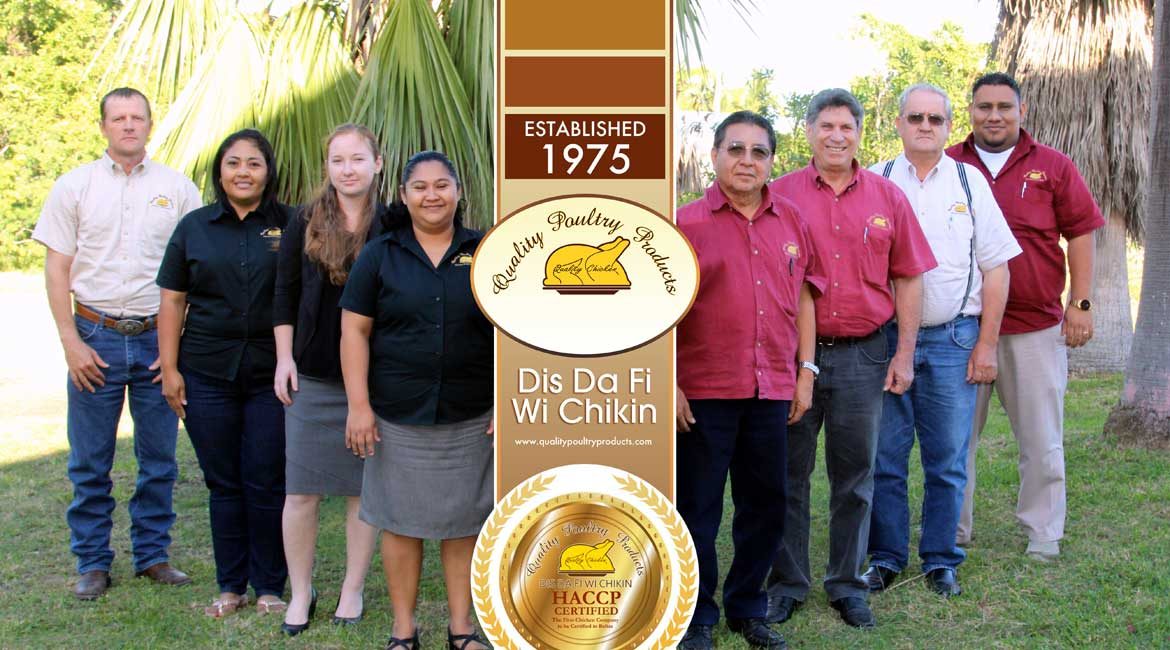 Quality Poultry Products (QPP) is a co-op owned, chicken producing company, located in the community of Spanish Lookout in the Cayo District of Belize. It was founded by Mennonite cultivators who came to Belize in the 1950s from Mexico and whose roots go back to Canada and Russia. “The initial founders were my uncle and my dad,” says QPP’s General Manager, Raymond Barkman. “They started raising chickens in the late ‘60s. At the time, they were the only chicken producing company in Belize.”

Because much of the country’s poultry was still being imported from the United States, Barkman says that the brothers began helping all the other chicken farmers who came along later so that, one day, Belize could become self-sufficient in poultry. “So they worked together as a group,” he relates. “Nobody ever dreamed that we would become self-sufficient. But they advanced the poultry business very quickly. And now there is no importation of chicken.”

Quality Poultry Products became an official company in 1975. Today, it has relationships with more than 130 local broiler farmers. It also operates its own retail/wholesale outlets in various parts of the country including Spanish Lookout, Belize City, San Pedro, Belmopan, Dangriga, Orange Walk, Corozal, and Punta Gorda. Quality Chicken can be found in every major Belizean food supermarket, restaurants (including the company’s own four restaurants it opened this past year), hotels, educational institutions serving Belizean food, and convenience stores. Using a fleet of 28 refrigerated trucks and a boat, QPP delivers daily to all locations countrywide ensuring that its products are always fresh.

Ironically, over time, the success of factory chicken farming in Belize fostered competition for the original company and, today, Barkman admits that there are other players in the industry. “There are other competitors and the competition has gotten fierce,” he says. “I have 55 percent of the market share; the rest is between four other companies.” QPP has 378 employees who slaughter and process about 30,000 birds a day from a stock of over a million.

Factory chickens are hatched out of incubators and brooded under a heat lamp or other controlled temperature arrangement. They are fed an optimum diet of scientifically formulated rations and, with few exceptions, fed as much as they are willing to eat. The diet that QPP farmers feed their stocks comes from grain that is both grown and milled locally. That means that all of the company’s poultry (it also processes all the turkeys that Belize consumes) can be raised free of colorants, preservatives, hormones, and GMO -grains. “We are way ahead of the rest of CARICOM because we have the land mass and we can grow everything we need,” says Barkman.

QPP operates a state-of-the-art facility dedicated to the highest quality of control standards. In fact, the company just recently received its long sought-after HACCP (Hazard Analysis and Critical Control Points) certification, an internationally recognized standard for food processing sanitation and safety. Barkman reports that almost three quarters of the $7 million the company has spent in factory upgrades over the past few years was to establish the HACCP certification, which now allows QPP to export chicken. “It’s the bare minimum that every chicken has to comply with to be able to export,” he says. “Now we are ready for two shifts, which means we can work day and night. If we want to start exporting we need another shift.”

Barkman thinks that QPP’s potential export market will be health-conscious consumers who simply want higher quality chicken and are willing to pay a premium for it. “We take a lot of pride in the way we produce chicken because we don’t inject hormones, we don’t use preservatives or GMO. This is something that most companies can’t brag about,” he asserts. “Nobody else can do non-GMO chicken because they must import grains from the U.S. Because we don’t import, we are completely GMO-free. I need a niche market and non-GMO is perfect for me.” Barkman says buyers in Costa Rica and Trinidad & Tobago have already expressed interest.

Now that QPP has the ability to penetrate the export market, Barkman believes that the company will be able to double its production over the next three to five years, fulfilling its vision to be the dominant provider of quality poultry products in Belize. “Every time when we went into the export market, the first question was ‘do you have HACCP?’ ‘Oh, no?’ Well that door closes. So, here is what I hope HACCP will do for us: now when that door opens, we can go in.”

AT A GLANCE
WHO: Quality Poultry Products
WHAT: A cooperative poultry processing company equipment, and shipping services
WHERE: Spanish Lookout, Belize
WEBSITE: www.qualitypoultryproducts.com

The Government of the Turks & Caicos