The Big Creek Group – Big Plans and Big Challenges Ahead 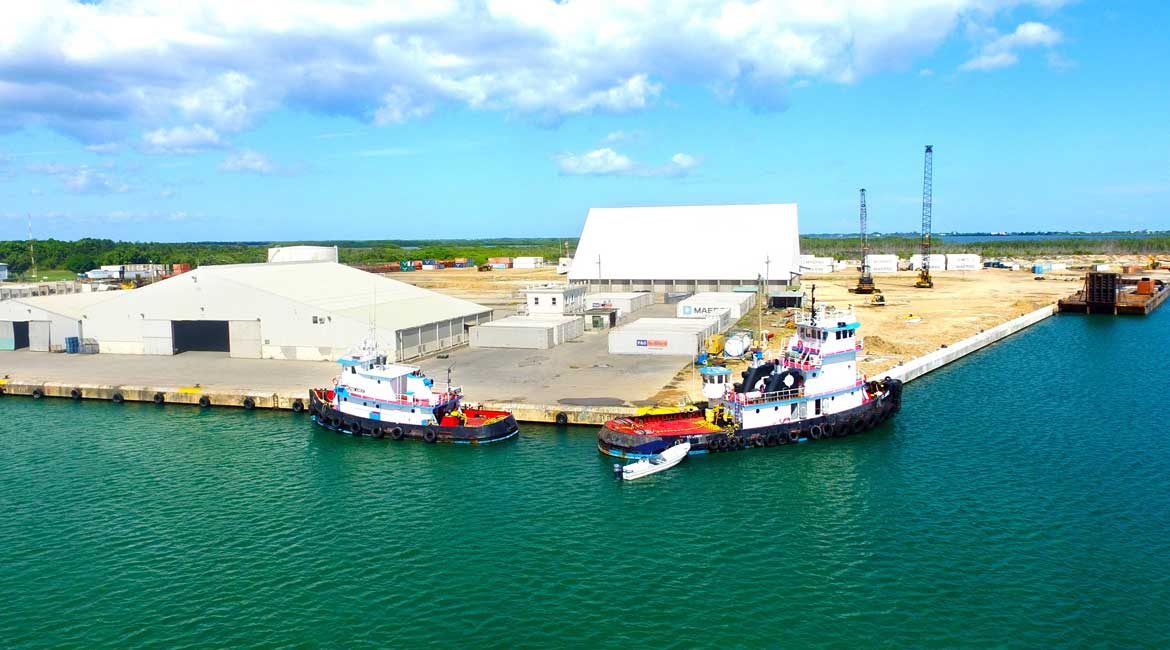 The Big Creek Group is a group of investors who facilitate and oversee the operation of several companies in the privately-owned community of Big Creek, in the southern part of Belize. The key members of the Group are Michael Duncker, Antonio Zabaneh, and Zaid Flores, all businessmen who are involved in a variety of major industries such as shrimp, bananas, citrus, port facilities, ship agency, and fertilizer importation and distribution.

The six core companies that operate out of Big Creek are: the Port of Big Creek – the country’s principal port for exports; Banana Enterprise Limited – providing port, tug and barge, and stevedoring services for the Port; Belagro Agriculture – the largest fertilizer and agro-chemical supplier in Belize; BC Shipping – an international container shipping company; Haney Farm Limited – shrimp farming; and Softech Data Center – an online travel agency.

According to Anuar Flores, brother of Zaid, a former Director of the Central Bank of Belize and currently a Director of Belize Electricity Limited, and, for the past several years, a business consultant to the Group, the history of the Port of Big Creek is intimately tied to the country’s banana industry. “It has been at the center of the development of the Port and the Big Creek Group,” he explains. “In the early 1980s, the once government-owned and foreign-managed banana industry was on the verge of collapse. The United Kingdom wanted the bananas but the production was too small to justify the efforts; the shipping time was too long and manual loading on barges, transported to Guatemala for transshipment to the UK, was just not cost-effective and created significant quality issues.

“The then Chairman of the Irish-owned Company, Fyffes, Mr. John Ellis, a former Vice Chairman of United Brands Fruit Company, a visionary and strong advocate of the Belize banana industry, with the assistance of Craig Griffith, a retired Investment banker, coordinated with the Caribbean Development Bank, Barclays Bank International, and Fyffes, and incorporated Banana Enterprises Limited, a change that would, today, see the once fragile industry of 1,200 acres grow to 7,000 acres, with a production of 6,000,000 boxes annually, and the manual operations at a makeshift port, transformed into a full deep water port terminal facility, the Port of Big Creek.

“A majority of the founding shareholders of Banana Enterprises Limited could not see the vision and sold out their positions in the early years. Zaid Flores, an accountant and practicing auditor for Price Waterhouse Coopers, along with Duncker and Zabaneh, saw the vision, grasped it, and made it their own. Mike and Tony were already shareholders, so Zaid secured a loan through one of the local banks and bought the shares being sold. The Company is now owed by these three in equal proportions.”

Today, the Big Creek Group employs 250 people and is the driving force for economic activity in southern Belize. There are multiple buildings on the Big Creek property, including offices, employee housing, equipment and maintenance sheds, and inventory warehouses. In addition, the Group has allotted a portion of the land adjacent to the Port for the storage and export of crude oil coming in from the current oil production facility in Spanish Lookout. A tank farm with six tanks, with a capacity of 60,000 barrels, was recently erected. The current footprint of the Port is 75 acres with ample room for expansion since the Group owns 420 acres of surrounding land.

Flores reports that the Group is currently undertaking the development and expansion of the Port, a BZ$30M investment. This includes the construction of modern offices, deepening of the entry channel, the construction of a large steel deck barge, the acquisition of an additional tug boat and other miscellaneous heavy duty equipment, and the construction of a third berthing facility. He would like to see other changes, as well, including the construction of grain silos and the establishment of an EPZ (Export Processing Zone) within the Port to attract light manufacturing and other industries. He would also like to establish alliances with strategic carrier partners to improve Port traffic. He hopes that, along with these improvements, the Port’s current advantages will help it to compete more effectively with the only other major port in the country, 150 miles away in Belize City.

“Currently they have the majority of the containerized business primarily because they are the oldest port in the country and for many years was the only port; vessels had no other choice,” Flores says. “But, we are pushing hard for our marketing efforts to generate more of the containerized business for us. The Port of Big Creek offerings are different from the port in the city. We have three alongside berths; therefore, we can accommodate three vessels simultaneously unlike the city port that operates only with a single trestle. We specialize in refrigerated cargo, we have facilities to accommodate 120 refrigerated containers, our stevedoring services are not unionized, and we have ample space for expansion and growth. Our Port is in a protected quay and has, in place, redundancies in key areas to ensure reliability and efficiency.”

Flores outlines some of the Port’s future goals and objectives: “We see Belize becoming a primary exporter of agricultural products to the Caribbean and Central America, and the Port becoming a world-class facility,” he states. “The Port’s mission is to provide a world class import and export alternative, harness its strategic geographic position to maximize cost saving opportunities, and, by extension, stimulate increased economic activity in the south while remaining competitive and secure. Its vision is to become a prominent, multifaceted, comprehensive, sustainable, and innovative port in the region, with a commitment to continue strengthening the national economy, and improving the living and environmental conditions of Belize.”

Regarding the Big Creek Group, as a whole, Flores believes that it needs to take active steps to shore up the country’s banana industry, which has not grown significantly over the last several years, and especially since Fyffes, which imports much of the country’s output, was recently bought out by Sumitomo Corporation, a major Japanese conglomerate. “Who knows what these new owners will decide to do with Belize’s banana industry?” he wonders. “So, major decisions must be made. If we’ve learned anything from the past, it is that we do not linger at crossroads. We must grab the opportunity while we have the chance. We must put the industry back on the path to growth and convince the new buyers that we are here to stay and our niche in quality and specialized packaging is worth keeping.”

Clearly, there are both big plans and big challenges ahead for the Big Creek Group.

AT A GLANCE
WHO: The Big Creek Group
WHAT: Several companies in the Big Creek community
WHERE: Southern Belize
WEBSITE:

KeyPlex International Inc. – KeyPlex serves the agricultural and the mosquito abatement community with highly-effective plant nutritionals and bio-control products. The company was founded in 1980 by Dr. Irwin Morse, a Miami surgeon and cancer researcher, and George Butler, a prominent Homestead nurseryman. –  www.keyplex.com