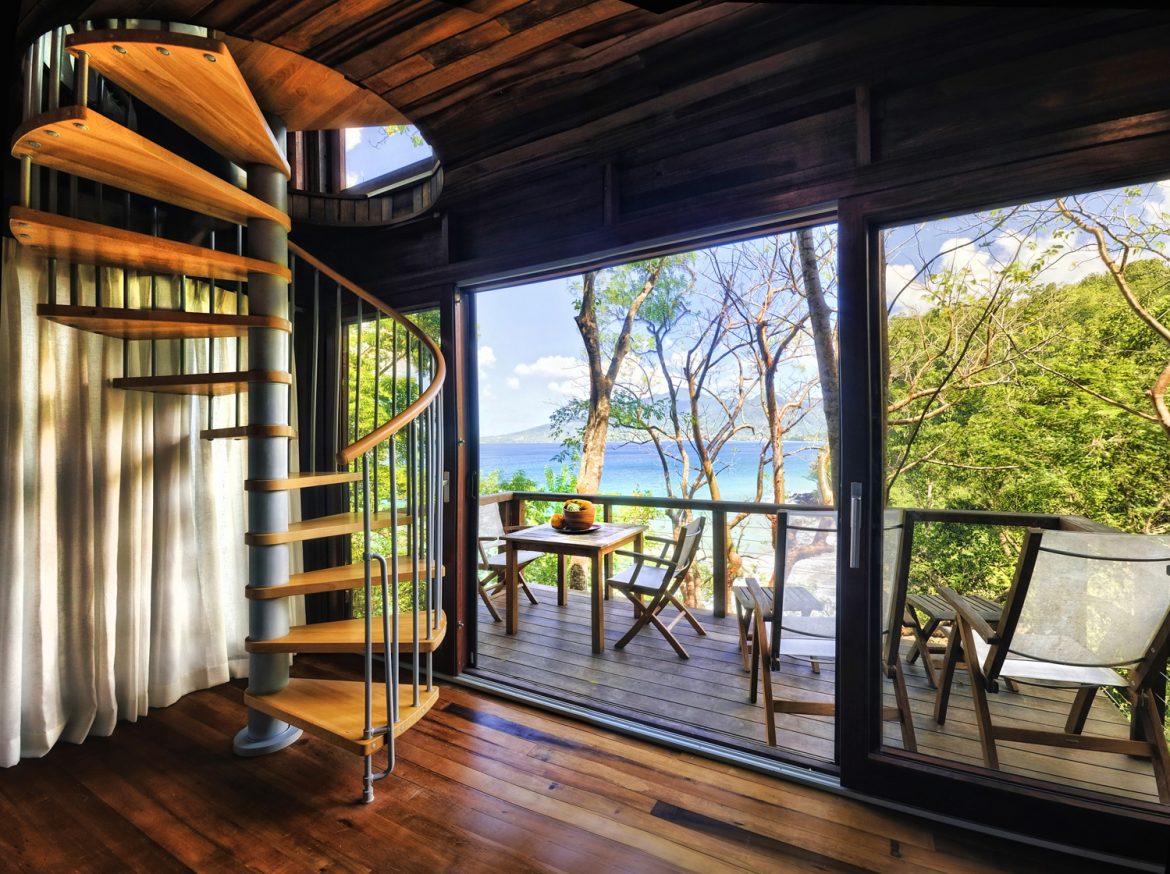 The eco-focused development on the Caribbean island of Dominica is shaped in equal measure by a responsibility to the environment and a desire to offer guests an experience in which they’ll reach harmony with nature while rediscovering what’s often lost amid a hectic always-on-the-go lifestyle.

“Luxury can mean many things to many people,” said Anastasia Thomas, Secret Bay’s guest services manager. “To us, it primarily means a luxury of time. We live in such a fast-paced society. We cook breakfast in a microwave, we have a sandwich for lunch, we pop something into the microwave for dinner and then we go to bed and start the whole thing over again tomorrow.

“Our guests come here to really experience what life is like when they’re given that time back. The time to savor a glass of fresh-squeezed juice, to see a hummingbird move from flower to flower and to see the warm touch of the sea on your skin or the warmth of the sun on your shoulder.

“When you come here, that’s what a vacation is all about.”

The concept of the resort began with Dominica native Gregor Nassief, who frequented the land upon which the facility is built as a child and long desired to make it his home. Ultimately, his Venezuelan-born father-in-law, noted architect Fruto Vivas, helped make the dream a reality by designing the villas and bungalows that are found on the property today.

Thus, the connection to the land is strong and the passion for the mission is palpable.

Though Dominica is among the largest islands in the region at 754 square kilometers, it’s also one of the least populated – with only 72,660 residents. What it lacks in people it makes up for in nature as the home of 365 rivers, the world’s second-largest boiling lake, volcanoes, mountains, waterfalls, hot springs and both black and white sand beaches. Much of the island is protected national park land and it’s typically been a go-to destination for divers, hikers and bird-watchers. Among Secret Bay’s signature elements is a commitment to sustainability, which is borne out by an appearance and amenities far different than the commonly held image of “Caribbean resort.”

So long as arriving guests have done their due diligence, Thomas said, paradise awaits them.

“I’d say 99.9 percent of our guests leave happy and satisfied,” she said. “But you have to do your homework. If you come here expecting what you see in other places, you may be disappointed. Dominica is a young island. There’s no shopping mall. There’s no major cinema to go to. The ones that are surprised by that are the ones who didn’t do their research.”

Indeed, there is no formal check-in area and there are no restaurants at the resort. Instead, all rooms come equipped with full kitchens and a transition is under way that, by the end of 2014, will see to it that fruits and vegetables served to guests will have been grown in an on-premises garden, according to Marvin Daniel, the resort’s operations manager.

Also planned by the end of next year is construction of an on-site solar farm that would take up 1,800 square feet of space and produce enough power – 2.3 kilowatts, Daniel said – to handle all of the resort’s lighting needs, though electricity to run other equipment would still be generated elsewhere.

Additionally, no trees were cut down during construction, which means many of the units were designed around existing trees and have incorporated them into the design. A drip irrigation system was put together to water all the potted plants on the site, and plans are in the works to do away with all plastic water bottles and supply all incoming guests with stainless steel bottles that can be refilled with filtered water in each room. “There are quite a lot of projects, not all of them large, that we’re working on,” Thomas said. “That speaks to our eco-sensitivity. Our aim is for guests to relax, enjoy and be one with nature and have the opportunity to get to know themselves, or one another. Our resort is one that conforms to the environment. We’re not forcing the environment to conform to the resort.”

Thomas said the resort’s master plan includes the creation of a dedicated spa facility, though she concedes that the nature of the guests – the overwhelming majority of whom are celebrating honeymoons or anniversaries – may necessitate that portion of the plan being scrapped to maintain a more individualized approach.

Among the spa services available are massages, manicures, pedicures and waxing.

“We haven’t decided if we’ll do a full-service spa or continue to do treatments in the villas or bungalows or down by the beach,” she said. “They like it because they don’t have to dress up to go to the spa. They can be watching their favorite program or watching the birds sing and be getting a facial or a pedicure or a manicure at the same time while just relaxing in the space.”

The resort, according to Thomas, maintains a steady flow of traffic throughout the year, but the island becomes a particular tourist destination in high season – from December to March. Another peak period is October, which is home to the World Creole Music Festival and an opportunity for guests to not only enjoy the resort, but also learn about the island and its food and dance.

Another recent addition to the guest mix has been increased interest from corporate entities. Thomas said one individual company rented the facility as a whole and will use it for a retreat to help employees relax and create an environment to generate new ideas. “For them, it’s the relaxing surroundings that were attractive and the owner thought it would be a nice and open and free environment,” she said, “rather than a large resort with many distractions.”

Some, in fact, love their stays so much that the true challenge comes on the day they depart.

“Most guests don’t want to leave,” Thomas said. “We laugh and tell them we have a secret program where you can burn your passport and start a life here, and sometimes I think we could really do it.”

The Cayuga Collection – A symbiosis of...