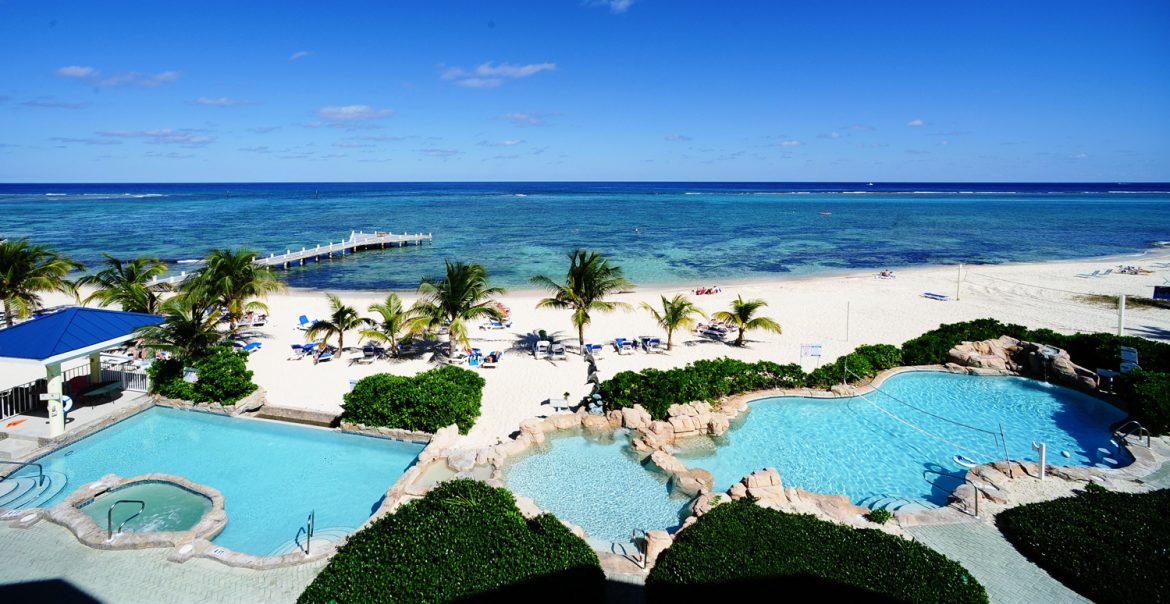 Business View Caribbean interviews Gaetan Babin, Director of Sales at The Reef as part of Top Resorts in the Cayman Islands.

The Reef draws high marks for peace, quiet and serenity.
Working at a luxury destination in the Cayman Islands is, by definition, a hectic endeavor.

But it’s the prospect of month after month of 24/7 activity that pulls Gaetan Babin back in each day. “They say in the flower business, if you can’t make money on Mother’s Day then you shouldn’t be in business,” said Babin, director of sales at The Reef Resort, on the eastern tip of Grand Cayman on the shores of the Caribbean Sea. “I’ve been involved in this industry for 25 years and it’s very exciting.

“People are coming in from the frigid cold up north – from Canada to New York to the Midwest – and you land here in paradise; sunny days, no wind, mid-80 degrees. It’s nice.”

The resort will typically do 50 percent of its annual business in the five-month stretch from December to April, with the majority of visitors arriving from New York and its immediate surroundings. Other strong bases from North America include Texas, Florida, the Carolinas and Canada.

The United Kingdom, Italy and Germany are the top European sources, and Babin said the reputation of the Caymans as a particularly well-off destination means the clientele is particularly discerning.

“People are coming here by choice because of what we have to offer, and not because it’s the cheapest place on the planet,” he said. “We have a mixed-used property, from rentals to limited timeshares, so we draw a client base that’s a little more affluent.

“A third of our members are in the medical or education fields. So it’s not the over-, over-affluent, but it’s certainly not the people who are looking for what they can get for 99 dollars, including all the food and including all the tequila they can drink.”

The resort features 1,600 feet of beachfront and all 166 studio and suite floor plan arrangements are on the water. Regular one-bedroom suites are 900 square feet with a full kitchen, while one-bedroom executive suites include a dining room and lounge and cater to families and couples enjoying longer stays. Two-bedroom master suites include 1,350 square feet and have a full bathroom and full kitchen. Sizes may vary, but what they all have in common is proximity to sand and water.

“They’re not cookie-cutter hotel rooms stacked side by side,” Babin said.

“You basically take one step out the door of your unit and your toes are in the sand, and you take 30 steps and your feet are in the sea. All the units are like that. I refrain from using the word ‘better’ because there are a lot of great operators, but we’re the only one in the Cayman Island that is complete on the water, and no one can take that away from us.”

Another differentiation from other Cayman locales – as well as those in Cancun, Barbados and Fort Lauderdale and other places – is The Reef’s positioning on the less-populated side of the island, which appeals to customers seeking a laid-back vacation, as opposed to perpetual nightlife and crowds.

It’s 20 miles from Seven Mile Beach, and Babin revels in its label as the “Island Side” of Grand Cayman.

“People are really looking to get away from the busy beaches, where it’s hotel after hotel after hotel and every chair is reserved,” he said. “We don’t have that here. We attract a really well-suited clientele to our resort. We’re regarded highly because of the peace, the quiet and the serenity.

“It truly feels like you’re at the end of the world here. A person walked on the beach into about four feet of water, put their face in, picked out a lobster, took it home and cooked it. There are only so many places in the world you can do that. The pictures are good. But it’s like seeing the Grand Canyon on picture. Until you see it up close you have no idea.”

Recognizing its strengths has led to positive feedback for the resort from its visitors. The Reef was awarded a second consecutive Certificate of Excellence by TripAdvisor in 2013, which means it maintained an overall rating of 4 or higher – out of a possible 5 – from a benchmark number of reviewers on the website for 12 consecutive months.

Only the top 10 percent of listed business qualify for the recognition.

The resort has received an “excellent” rating from 86 percent of TripAdvisor users, placing it ahead of three branded facilities on Grand Cayman – Comfort Suites (84 percent), Marriott (83 percent) and Westin (78 percent) – and within close range of another name brand, the Ritz-Carlton (90 percent).

It also earned a spot on the 2012 Expedia Insiders Select List, which combined input from Expedia’s worldwide employees along with online reviews to come up with a collection of 650 listed properties whose services, guest experiences and value were considered superior.

“It’s extremely important to us,” Babin said. “The true rating of a resort is not based on our opinion of what we have. It’s what the people who come here think of us. You’ve got to define the market you’re going after. You can’t just throw mud on the wall and try to please everybody, because it’s impossible.

“We know the market we’re after. We know who we’re trying to attract. We’re certainly happy and pleased and humbled by the comments we get.”

Maintaining those high marks comes from quality service, Babin said, but also from a consistent commitment to keeping the resort’s environmental standards on a high level.

All power needed to sustain the resort is generated on site, recycling has been a standard practice since the facility was built in 1999 and The Reef was the first site on the eastern end of the island for a solar-panel charger foe electric vehicles. Surplus energy from the chargers is fed back into the national grid.

Deals with local vendors are also a first priority when it comes to food and supplies.

“It’s a very, very sensitive we live in here, so we all have to be very conscious of the damage that can be done when people are uneducated or unaware,” Babin said. “We educate members on what to do and what not to do, and every one of our partners – tour operators, watersport vendors, etc. – goes through an environmental impact assessment to make sure what they’re providing isn’t harmful.

“The Caymans have a reputation as a very clean and well-maintained place, and it’s our job to make sure that doesn’t change. That matters to us a great deal.”

WHO: The Reef
WHAT: Beachfront suite and studio resort
WHERE: Grand Cayman
WEBSITE: www.TheReef.com