Hey there, Business Viewers! Here we are after another month, and another 30 days of strength and growth in the region. When I look at how well the Caribbean has responded to what most have considered one the most disastrous climate events in its history, I become proud and speechless. As a publication that represents both the business and tourism sectors, we’ve spoken with some amazing companies over the last five months – companies that are operating without forty to fifty percent of their power, but still generating the same or more revenue that they were prior to the disastrous storms.

As we work with the Caribbean Hotel and Tourism Association and the Caribbean Disaster Emergency Management Agency, we’ve learned that, in spite of the effects of the hurricanes, Caribbean tourism actually increased, setting record numbers in the number of tourists, and also in the amount of revenue generated both prior to, and after the events that occurred in September of 2017. Some company’s doors are still closed today, but due to the resilience, spirit, and nature of the executives, management, and the employees of these companies, another door is being re-opened in the Caribbean, every single day.

How is this possible? How can a company that is operating at half the capacity and resources than it was previously, generate revenue comparable to that of when it had its full resources available? Well, besides the obvious answers; resilience, tenacity, determination, drive, commitment, and pride, comes the reason why Business View Caribbean exists: it’s management creating and communicating an organized plan.

A great manager is much like a great coach, in that they both respond to adversity and crisis in the same manner. They remain calm. They don’t point fingers and start placing blame at anything or anyone. They don’t discuss the problems, they immediately focus on addressing the solutions to whatever situation is at hand. Once they create a remedy for the most immediate and pressing of the solutions, they keep that calm in order to plan an effective strategy for victory. No matter how bad things appear, they somehow have the sensibilities to understand that everything has a path to victory, and the only way they can visualize that possibility is through a calm, cool, and methodic strategy.

In team sports, those great managers have to be able to convey that cool and calm demeanor to the rest of the team, so that the athletes can hear the strategy without being in a stressed-out or catastrophic mind state. Then they map it out, show it to them, and immediately show strength in leading them to victory by sticking to that winning strategy that was diagramed. This is the only way those results are possible. You can’t be frantic and unorganized and win, too!

This is why Business View Caribbean brings you the top companies and executives, every edition – to convey the wisdom of those who are thriving in order to assist any and everyone willing to obtain just a bit more of that wisdom in order to lead their own company forward.

Thank you for making us the leading executive business magazine in the Caribbean.

Until next time, plan, build, and continue to prosper. 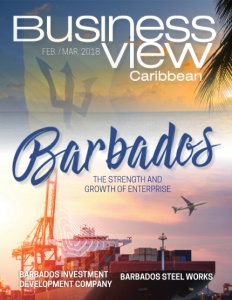