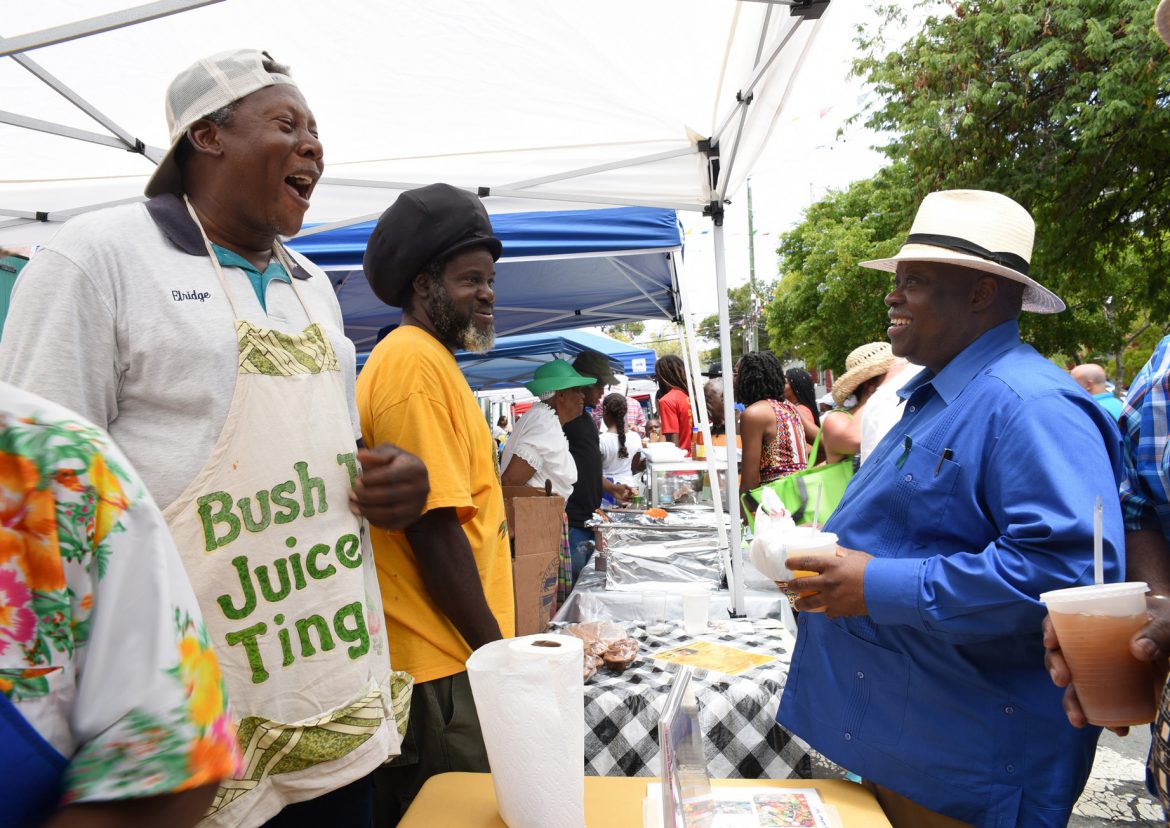 Business View Caribbean sits down with Governor Kenneth E. Mapp of the U.S. Virgin Islands to discuss his future plans and to do list.

The U.S. Virgin Islands consists of nine main islands and some 75 islets. They were originally inhabited by the Carib Indians and were explored by Columbus in 1493. Since 1666, England has held six of the main islands; the remaining three islands – St. Croix, St. Thomas, and St. John – as well as about 50 islets were eventually acquired by Denmark and named the Danish West Indies. In 1917, these islands were purchased by the United States from Denmark for $25 million.

In 1927, the U.S. Congress granted citizenship to the Virgin Islanders. Universal suffrage followed in 1936 to all persons who could read and write English. The U.S.Virgin Islands are considered an organized, unincorporated territory. Its government consists of three co-equal branches: the Executive, the Judicial, and the Legislative which is comprised of a unicameral, 15-person legislature. Administratively, the Islands are divided into two districts. Since 1970, the Governor has been elected by popular vote every four years; previously he had been appointed by the U.S. President.

The Virgin Islands are represented in the United States House of Representatives by a non-voting, at-large delegate who serves a two-year term and can sit and vote in committee. U.S. Virgin Islands residents cannot vote in presidential elections, but they are able to vote in presidential primary elections for delegates to the Democratic National Convention and the Republican National Convention. Unlike persons born on the mainland and naturalized citizens who derive their citizenship from the Fourteenth Amendment of the U.S. constitution, those born in the U.S. Virgin Islands derive their U.S. citizenship from Congressional statute.

On January 5, 2015, Kenneth E. Mapp was sworn in as the eighth elected Governor of the United States Virgin Islands. With his running mate, Osbert E. Potter, the team earned nearly 67 percent of the popular vote in a run-off election held on November 18, 2014. Mapp was born in Brooklyn, NY in 1955, and moved to St. Croix in 1961. Soon after graduating from St. Croix Central High School, he was accepted for training by the New York City Police Department, and went on to serve in Brooklyn’s 83rd precinct. He later became an officer of the Virgin Islands Police Department, whose members elected him president of their Police Benevolent Association.

Before serving as Governor, Mapp was a Virgin Islands Senator, predominantly sitting on committees of finance and economic development. He also served as an Assistant Director of the Industrial Development Commission, which later became the Economic Development Authority; as the Director of the Consumer Services Administration, which is now the Department of Licensing and Consumer Affairs; as Commissioner of Insurance; Chairman of the Banking Board; and Director of Business and Administration of the Public Finance Authority. In 1994, he was elected to a four-year term as Lieutenant Governor. After leaving office, he earned a master’s degree in public administration from Harvard University’s John F. Kennedy School of Government and completed the Advanced Management Program at Harvard Business School.

Mapp believes that his familiarity with both the public and private sectors have well-prepared him for the challenges of the Governor’s office. “My vision and my view comes from a real potpourri of experiences from the front line of government, through its middle management, right up to its top, and from the wide spectrum of issues having to do with management and labor, to working with my clients in terms of trying to improve their bottom line and their competitive advantage in the marketplace – the whole nine yards,” he says.

“And so, my view for the Virgin Islands is really basic in terms of the public sector,” he continues. “I ran on a platform of becoming more efficient and becoming more timely with the development and implementation of public policy. We’re really not efficient. We don’t spend our resources in a manner that’s important for the conduct of government, whether it’s the providing of security through proper policing, the development and growth of our infrastructure, understanding the dynamics of and the cost of energy; being able to attract business; and how to control and manage the cost of living in the Virgin Islands.”

Mapp also believes that the Virgin Islands “missed the boat” by not developing technologically and not training a workforce that could adapt to the ever smarter demands of employment outside of the service sector and the manufacturing industries. “We’re too far behind the curve,” he says. “The economy is not just tourism. We need to train people to adapt to change and to implement it. So, we have a broken system, a disjointed system; not a community that lacks capability, but a community with the pieces all over the place and a general belief that if we throw money at the problem it would be solved as opposed to looking at the core basis of the problem and resolving what’s generating the inefficiency – what’s generating the problem and solving it there.”

So, Governor Mapp has many items on his to-do list: He wants his administration to upgrade the delivery of government services by implementing online technologies so that, for example, people can pay their taxes or get access to governmental documents without having to stand in long lines. He would like to “improve our healthcare system and take full advantage of the tremendous benefits that will be accorded to the Virgin Islands under the changes that have been adopted under the Affordable Care Act, where the government is responsible for paying healthcare costs of those who are either uninsured, underinsured, or who simply don’t have the ability to pay.” In addition, he seeks changes in the Islands’ educational system: “Understand that more than 60 percent of our public school graduates that are attending the University of the Virgin Islands are on skills courses, meaning they are struggling on issues of basic reading, math, and writing,” he laments. “And when we look into the system, we see that less than 30 percent of our third grade students are reading and writing at a third grade level.”

Looking to a better future for the territory, Mapp sees the Islands’ newly upgraded technology infrastructure as a key part of his “catch-up” agenda. He explains: “St. Croix, for example, has the largest bandwidth capacity in the Western Hemisphere except for New York/New Jersey, which means that St. Croix possesses more bandwidth capacity than Silicon Valley in California. The Virgin Islands, to its credit, took advantage of the connectivity program sponsored under the Obama administration and took about $140 million in federal and local money to do a complete fiber-optic infrastructure system connecting the three islands. Under the connected, infrastructure system, we are on a speed of one gigabyte per second with the capacity to go to ten gigabytes. So, the Virgin Islands can become the technological hub of this hemisphere.”

In addition to its high-speed connectivity, Mapp also touts the Virgin Islands’ tax structure as a powerful incentive that can attract a new cadre of technology-based businesses. “By being in Ireland, Microsoft and Apple are paying a tax rate of about 12 percent,” he says. “But they still have to keep the money abroad, because if they bring the money into the U.S., they’ll be taxed at a higher rate. But if that same operation was in the U.S. Virgin Islands, because of a grant of the U.S Congress, giving the government of the Virgin Islands the ability to abate a company’s federal tax obligation, those funds could have a net tax rate of three percent. It’s our responsibility now to demonstrate that we have the technology platform and infrastructure to hold such an operation and that we have the energy costs that do not blow the tax incentives out of the window.”

Before his term(s) as Governor is through, Mapp would like to accomplish the following: 1) Seeing that the Virgin Islands have parity in federal infrastructure dollars, especially as it pertains to roads; 2) Modernizing the Islands’ healthcare system by taking full advantage of the Affordable Care Act, and giving its citizens broader access to the country’s Medicare and Medicaid programs; 3) Building a more robust private sector, including a growing inventory of hotel rooms, expanded sports tourism, a vibrant technology sector, and a broad financial services industry; 4) Safer streets and communities; 5) An overall improvement in the quality of education with a greater emphasis on a junior and senior high school curricula that focuses on science, technology, engineering, arts, and math; and 6)  A growing and robust agricultural sector “so that we can move closer to ‘farm to table,’ and move away from processed and sugar-laden food.”

In January, 2015, Governor Mapp ended his State of the Territory address with the following words: “Our challenges require courage and hard work. The team we have assembled to lead our departments and agencies and our senior staffs do possess the training, experience, and know-how to help move this territory to a better place. But just as important, we need each of you, our community’s citizens, to help push change forward. . . We are looking forward to working with each of you. . . and seeking common ground upon which we can build a brighter future for our people.”

WHO: The Government of the United States Virgin Islands

WHAT: A territory of the United States